The University of Utah Division of Equity, Diversity, and Inclusion promoted an online town hall presentation on its website, which asserted that America’s history of “capitalist warfare” is responsible for racism toward Asian Americans during the coronavirus pandemic.

Professor Jason Oliver Chang of the University of Connecticut Asian and Asian American Studies Institute spoke about the “Yellow Peril” and the history of racism toward Asians, as it relates to “confronting the pathogen racism of the COVID-19 pandemic.”

“Yellow Peril is a core feature of U.S. history rooted in imperialism and exploitation and capitalist warfare. Yellow peril is a racial polemic which shapes a narrative of war and the enemy within,” Chang said in the presentation.

“White supremacists, supported by the GOP and the Trump Administration have interpreted this disease as a foreign attack. Congress has already considered motions to seeking retribution from China for the disease. The racist response to the COVID-19 pandemic is making it worse,” he continued.

He then mentioned that racism has an impact on diseases in several ways, which includes shifting “scientific understanding from the biological reality to the social construct” and “assigning racial blame."

After Chang presented, a panel made up of women from the Indigenous Environmental Network, Black Womxn For, Freedom Inc, and Seeding Change: A Center for Asian American Movement Building spoke about the history of racism and its relation to COVID-19.

Besides the speakers, several polls and a diagram were presented to explain the anti-Asian racism.

One of the diagrams included what was being discussed during the town hall, including the “Yellow Peril” and “Capitalism” discussions.

One of the polls presented included suggestions on how to be involved to combat anti-Asian racism. 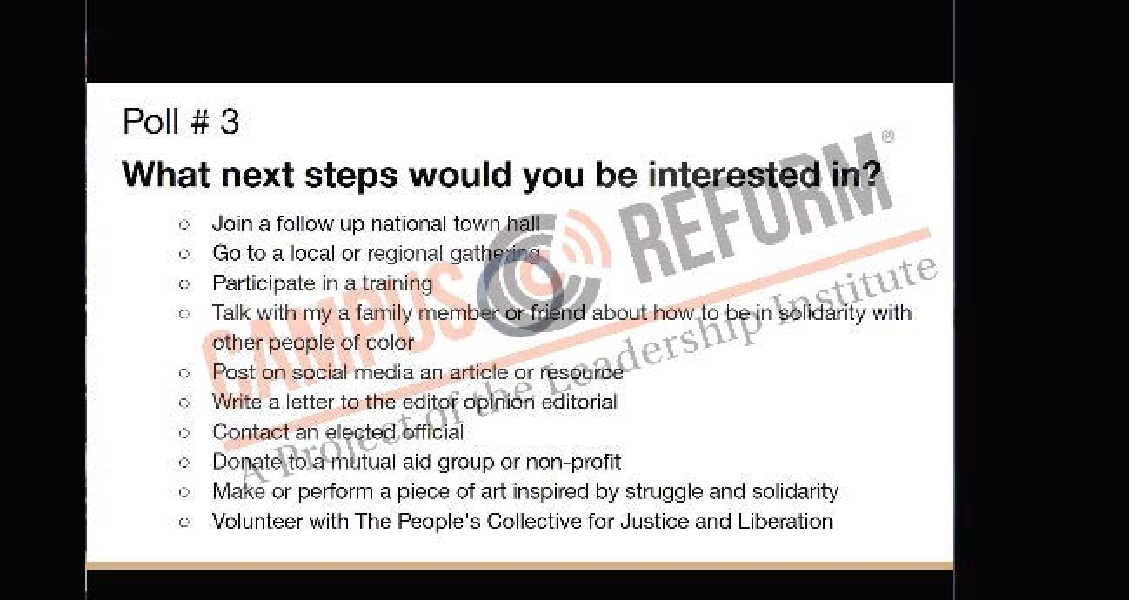 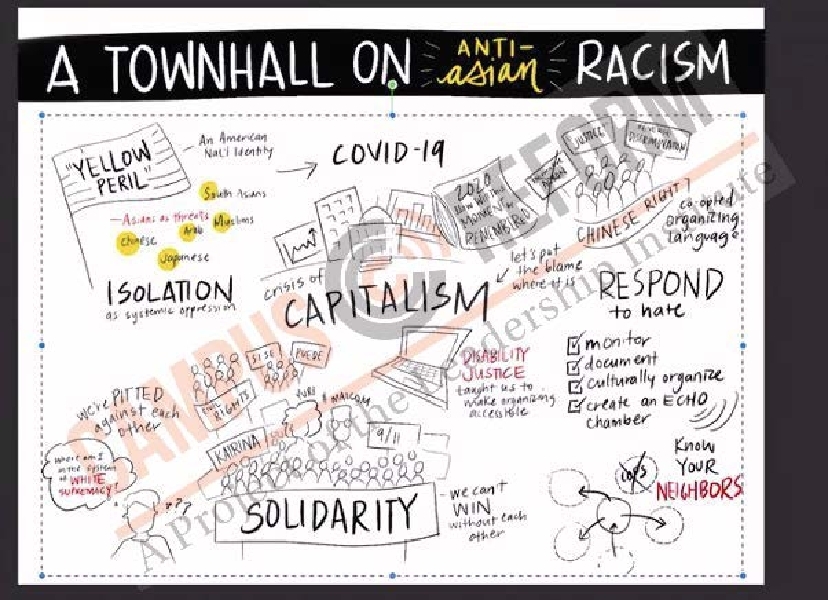 One of the panelists, Director at Black Womxn For Angela Peoples, called the coronavirus pandemic "a crisis of capitalism."

"Those that are responsible are those who have been hoarding wealth, not paying their equitable share in taxes and making it so the rest of us are struggling over fighting over a much smaller piece of the pie," Peoples said.

She went on to discuss how "president 45" "pivoted immediately to racist dog whistles and just really blatant racist statements," when asked if he takes responsibility for the pandemic crisis.

"So it's our job as people who can remember the collective and shared history of this country to call that and name that what it is, that it's not just Donald Trump being his awful, racist disgusting self, because he is, but also this is a part of their playbook. This is a part of the conservative, the right-wing, folks who are wanting to maintain profit and use exploitation to do it, that's one of their main tools in the toolbox, is to pit working-class people against each other," she added.

Not only has the Division of Equity, Diversity, and Inclusion promoted the town hall, but the university has also promoted the social media campaign called #UtahWashtheHate, which encourages individuals to record a video of them washing their hands and talking about how coronavirus has affected them while showing their support for the Asian community. According to Instagram, several individuals have posted videos, including people from various departments, centers, and groups at the University of Utah.

One of them shows Transfer Coordinator & Advisor of the Center for Ethnic Student Affairs Paul Fisk washing his hands talking to a young girl about how “anti-Asian discrimination related to COVID-19 is wrong,” and encouraging her to “let it go and wash the hate.”

An international student spoke about his concerns with the campaign and town hall.

“As an Asian, I’m currently aware there is social discrimination going on against the Asian American population due to the spread of COVID-19 or coronavirus. However, it’s unfair to blame President Trump for calling it ‘Chinese virus’ since it does originate from the city of Wuhan in China in the Hubei province,” University of Utah international student Billy Chan told Campus Reform.

“I would like to point out that the Communist Party and its leader Xi Jinping are fully responsible for the spread of the virus due to them hiding the information for the deadly contagious virus to the Chinese public and has been confirming by the US intelligence that the communist party is deliberately withheld the information from the public,” added Chan.

“When the virus did reach the US, the Chinese Communist Government did spread far-left conspiracy theory on Twitter as the American military is deploying the virus while they are at the ‘Military Olympic Games’ in Wuhan knowingly that information is false,” Chan continued.

Chan took issue with the townhall’s dig at “capitalism” as being responsible for racism.

“First of all, capitalism is the economic system that focuses on private ownership, lower taxation, deregulation, and creating profit to help contribute to the economy growing. It has nothing to do with the coronavirus since that is economic theory. Coronavirus is biological,” he reasoned.

“The last thing to point out is that the mainstream media such as CNN and MSNBC has called this virus the coronavirus and ‘Wuhan virus’ and ‘Chinese virus’ way long before President Trump did it, and now they are calling out President Trump on it,” Chan went on.

Chan insists that the real solution is for “people of all races and backgrounds to be united and the coronavirus together as it is a threat to the American way of life and after this, we would be united and make sure the communist party paid for what they have done to the American people specifically the Asian American.”

Frances Floresca is the content coordinator at Independent Women's Network. Previously, she was an Utah Senior Campus Correspondent and graduated from University of Utah. She has been published by the Washington Examiner, InsideSources, Deseret News, and The Salt Lake Tribune.