One account even shared photos of the alumna’s home, she claimed to Campus Reform and to police.

After a UGA alumna expressed disdain over renaming campus buildings, she said her personal information was shared on social media.

A Twitter account revealed the home address and personal details of a retired professor and University of Georgia alumna after she voiced her disapproval of the university’s decision to review the names of campus buildings, the professor has told Campus Reform.

Retired professor and University of Georgia alumna Catherine Sullivan commented on a tweet announcing the university’s new advisory group that will “review and study the names of buildings and colleges on all [University System of Georgia] campuses.”

Sullivan commented on the tweet multiple times expressing her disapproval of the initiative.

Sullivan told Campus Reform that her comments reflected her belief in preserving history. “Plaques could be put up explaining the person’s life and history. Good and bad! We need to know history or we are going to repeat the sins of the past,” she said. 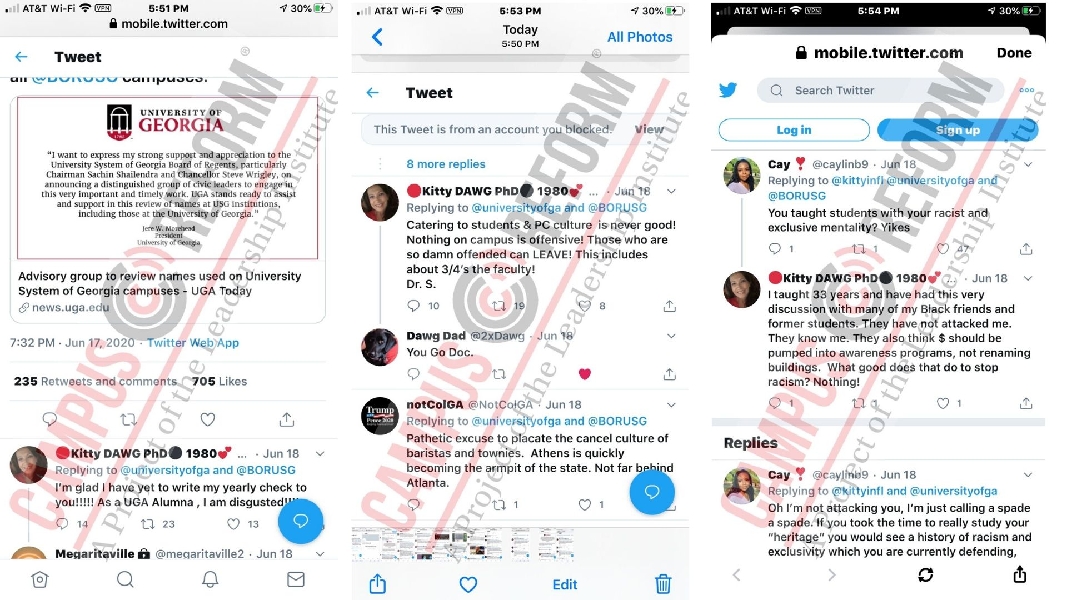 After Sullivan received multiple hostile responses, she reminded those attacking her that potential employers look at social media history. 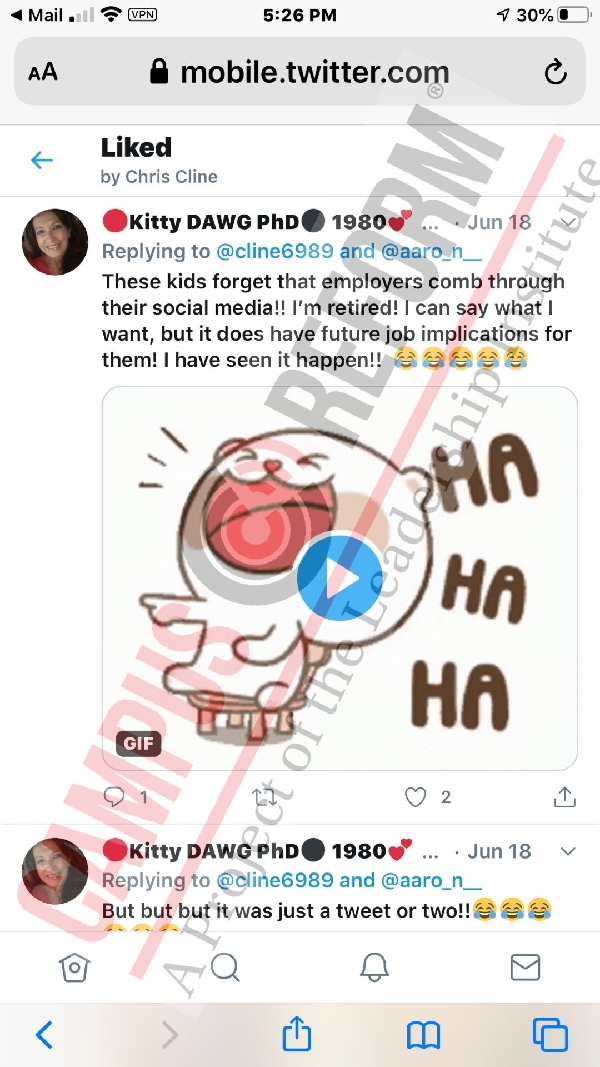 Later that night, an anonymous Twitter account, began using Sullivan’s street address as its username. The account’s bio read, “Catherine J Sullivan Macclenny FL” and her zip code. The first post by the account tagged Sullivan’s personal Twitter account and threatened, “I hope you don’t feel uncomfortable in your house with your 2007 Honda Convertible.” The account included two pictures from Google Street View of her home and the precise pin drop location. The account has since been removed from Twitter.

“I was scared to death!,” Sullivan told Campus Reform. 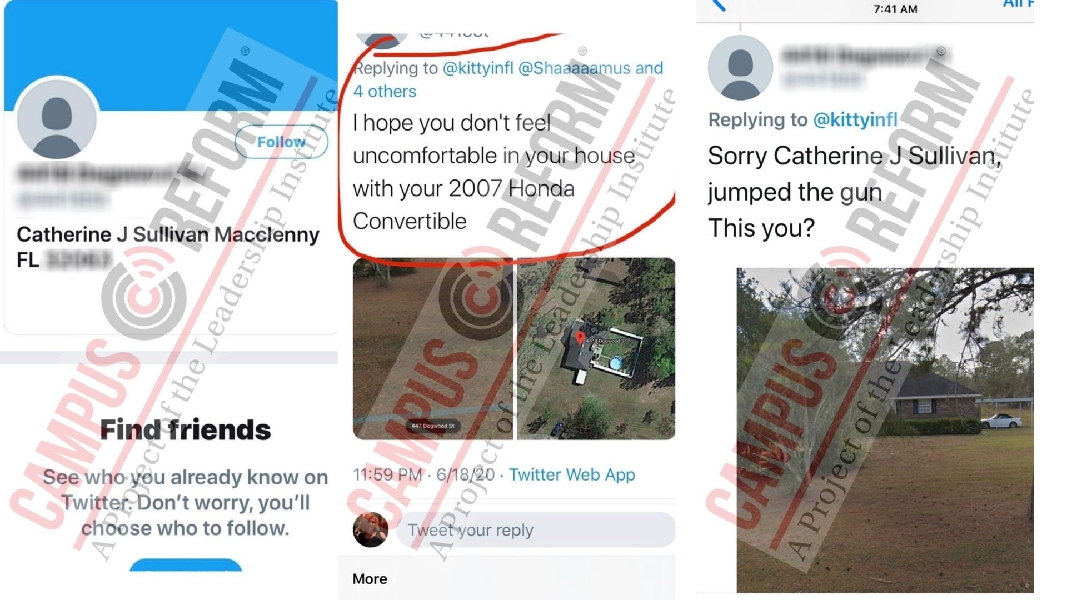 The troll account creator replied to the UGA tweet regarding renaming campus buildings. The anonymous author tagged the official University of Georgia and Board of Regents Twitter accounts and replied as if the account was Sullivan’s.

“I would just like to say that I am in fact a RACIST alumni and I hate what the school is doing to these monuments,” the comment read. “I support the white supremacist so they are big mad! They are important and I’m empowered by them,” another tweet on the troll account read.

“This makes me look terrible! I didn’t tweet this! They did!" Sullivan told Campus Reform. 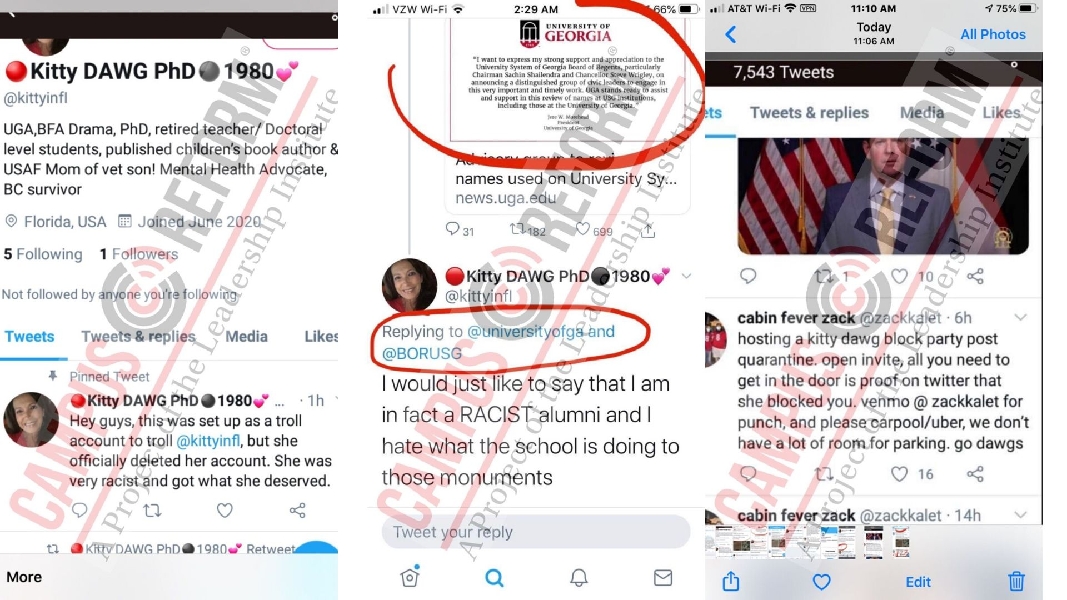 Sullivan says she has sent her driver's license to Twitter nine times to verify her identity in attempts to get the troll account removed from the platform. However, she said that Twitter has not responded to any of her attempts. Sullivan says that she was called a whore, bitch, and a c*nt. I was just not in favor of changing the building names but now suddenly I am the devil incarnate. It’s unreal!” Sullivan said.

“This is frightening and psychologically damaging. I can see how cyberbullying can push those who are fragile over the edge,” Sullivan told Campus Reform. “It’s sad that people behave this way! They are not good representatives of UGA, nor society!”

Sullivan filed a police report with the Baker County Sheriff’s Office in Macclenny, Florida because of the threats. Campus Reform obtained a copy of the report. Sullivan told Campus Reform that the officers are “taking this seriously,” and warned the threats against could be “felonies.”

Sullivan contacted UGA. The Office of Student Conduct replied that it will “review any investigative reports from [the Baker County Sheriff’s] office once the investigation is complete.” The Office asked Sullivan to keep it updated with “any significant developments” or “if any arrests are made.”

“I understand that UGA wants to wait until the investigation proceeds and arrests are made, but there is a climate on the UGA Campus that obviously protects such behavior. [The users] were very comfortable in tagging UGA and The Board of Regents in on some of these tweets,” Sullivan said. 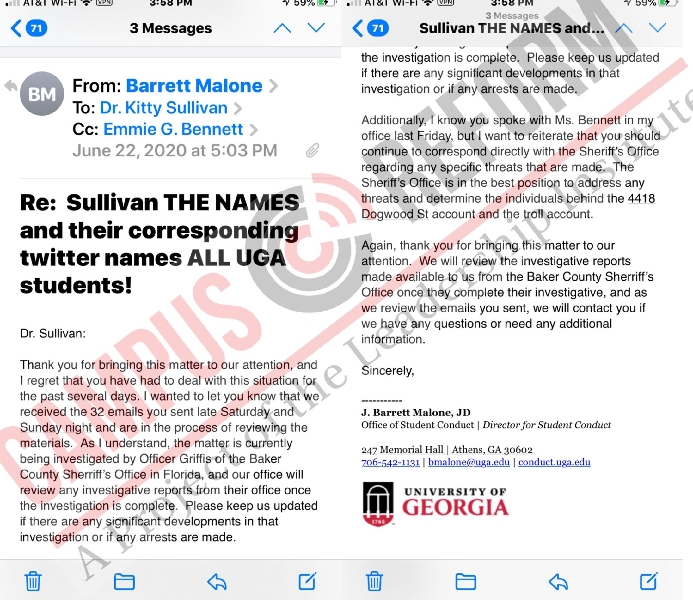 The UGA Office of the President notified Sullivan that it is “monitoring the situation.”

Sullivan says she has not received a response from the Board of Regents Office.

“Well, they have frightened a 67-year-old lady that is now on social security disability, cancer survivor, with major health issues. I hope it makes them feel good. I did not need added stress to my life, because I’ve got enough,” Sullivan told Campus Reform.