The Black Student Union launched a campaign to rename the University, Madison Hall, and the Churchill Center

The BSU considers the individuals’ actions abhorrent, racist, and oppressive

In a statement justifying their campaign, the BSU claims that James Madison “perpetuated and advanced systemic oppression and the societal mistreatment of African Americans.” The union does recognize that Madison ostensibly “stood for liberty and justice,” but concludes that his actions in owning slaves discredit “all of his political and social beliefs.”

Regarding Washington, the BSU disparages the school’s “Colonial Moniker,” claiming, “colonialism has been historically and contemporaneously built upon usurping land, labor, and autonomy from racialized communities through dehumanizing violence and suppression.” 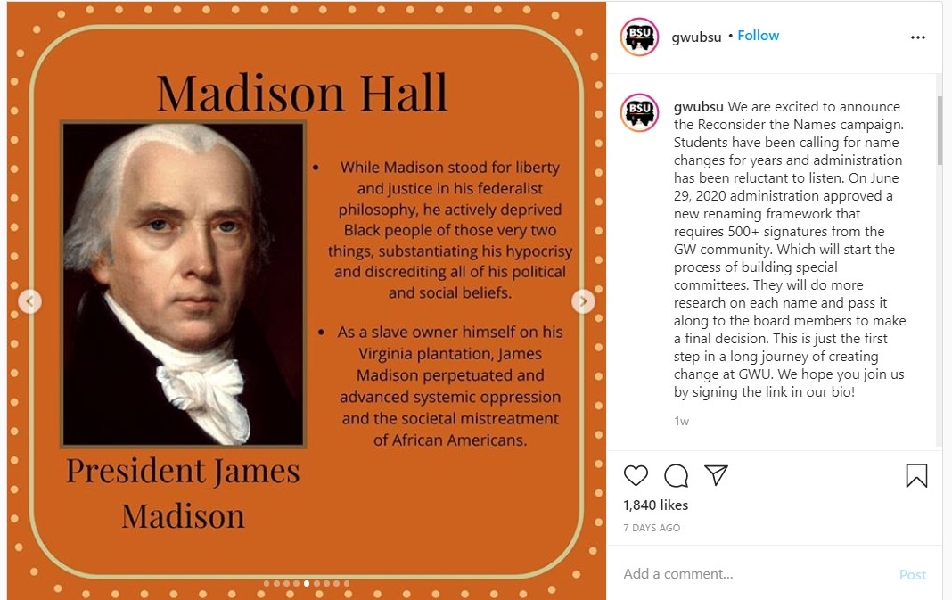 According to the group, a campus center named after Winston Churchill must also go, because Churchill  “oversaw the construction and operation of concentration camps in Kenya and South Africa."

Additionally, the BSU asserts that Churchill shipped “massive amounts of food from Bengal,” “orchestrating a famine that killed 3-4 million people.” Though this is contradicted by Sir Martin Gilbert, a British historian, and Hillsdale College, who contend, “Churchill did everything he could in the midst of world war to save the Bengalis; and that without him the famine would have been worse.”

Churchill, in fact, wrote to Lord Wavell, his new Viceroy of India, to address the famine. In his communication, Churchill wrote, “The hard pressures of world-war have for the first time for many years brought conditions of scarcity, verging in some localities into actual famine, upon India. Every effort must be made, even by the diversion of shipping urgently needed for war purposes, to deal with local shortages.”

After exhausting Britain’s ability to send wheat to India, Churchill was forced to write President Franklin D. Roosevelt for help. Churchill stated, “I am seriously concerned about the food situation in India….Last year we had a grievous famine in Bengal through which at least 700,000 people died. This year there is a good crop of rice, but we are faced with an acute shortage of wheat, aggravated by unprecedented storms….By cutting down military shipments and other means, I have been able to arrange for 350,000 tons of wheat to be shipped to India from Australia during the first nine months of 1944. This is the shortest haul. I cannot see how to do more.”

The university's new renaming frameworkincludes the cited stipulation that requests  for renaming facilities "should include the basis for change and a supporting petition signed by at least 500 GW community members," but notes that this particular requirement  "may be waived at the president’s discretion."

Kyle Reynolds is an Indiana Campus Correspondent with Campus Reform. He is a sophomore at Indiana University, Bloomington where he studies public policy, economics, and political science. Kyle is the president of The Crimson Post, a student publication on IU's campus, and is a campus ambassador for the Leadership Institute.