Prof: It's 'distressing' when white people say 'all lives matter,' 'asking them to stop' is a 'form of antiracist action'

A Bellevue University professor messaged students about how to recognize their privilege be “anti-racist” when confronting race.

An introductory anthropology course took a political turn when a Washington State professor began sending students messages about her personal opinions about racism in America, including encouraging students to take “antiracist action” by correcting people on Facebook who say “All lives matter,” a phrase she told the class she finds personally “distressing.”

Student announcement messages and slides obtained by Campus Reform show that students in an Antropology 100:Survey of Anthropology class at Bellevue University, taught by Faculty Development Curator Stephanie Brommer, received numerous messages discussing her thoughts on the George Floyd protests, while encouraging students how to become “anti-racist” and how to recognize their privileges and address “systemic racism” in America.

The course is meant to serve as an "introductory course on the cultures and biology of humans, from scientific and humanistic perspectives."

“At first it started off pretty good. We learned about the different epochs and branches of anthropology,” one student in the class told Campus Reform. “Then after a few weeks [til] the end of the class, she pushed very lefty agendas on us constantly.”

The student further explained that the professor pushed ideas ranging from feminism to systemic racism and, at one point, “taught that race is an illusion invented by white European colonists.” The student told Campus Reform that the class felt like “a waste of time and money.”

In one message to students, Brommer wrote about how it was “particularly distressing” that white people were using the term “all lives matter” in response to “black lives matter.” Brommer went on to share comments she made to both her cousin and friend who used the term on Facebook. She told students making these types of comments are “a form of antiracist action.”

In another message to students, Brommer discussed the “uprisings” in the wake of the death of George Floyd.

“What is going on illustrates race as culturally real, and that the legacy of race, white privilege, and white supremacy are alive and well and continuing in our world,” Brommer told the class. “It's important to address this and not push it under the rug. We cannot be colorblind.”

“We need to address the systemic racism and police brutality, and how to promote racial justice,” she added

She then gave students specific instructions as to how to respond to current events.

“Educate yourselves by watching and reading the news and having conversations about peaceful protests and what is happening when they turn violent - what are the differences between protesters, rioters, and looters; how can we change the systemic racism and inequity within which we live; research the institution of policing which was created in the South as slave patrols to keep blacks enslaved and later enforce segregation; research the criminal justice system and documented injustices and inequalities disadvantaging people of color. Be anti-racist through action - speak your truth, be an ally, educate, listen, post articles and opinions on social media, work for equity and justice, sign petitions, contact legislators, and vote.”

Brommer sent one final email to students on June 15, calling on students to work together in their own community “to end hate and discrimination and promote a United States that is open, welcoming, valuing, and supporting all people.”

"Vote in local, state, and national elections, be critical, and consume multiple media - and be aware of what is happening in your community, your nation, and the world,” Brommer wrote to her class, before going on to detail a specific set of current events and news headlines.

“Just today, we have news that the Supreme Court ruled that federal law protects LGBTQ+ workers from discrimination; the Atlanta mayor ordered police reforms after Rayshard Brooks was killed this weekend by cops; a second coronavirus shutdown could be in our future if measures aren't taken to prevent it; a white woman called a gas station worker 'Hitler' for asking her to wear a mask; Trump tweeted that media is trying to "covid shame" people going to his political rally; Seattle banned police from using or purchasing tear gas, pepper spray, blast balls and rubber bullets,” she wrote. 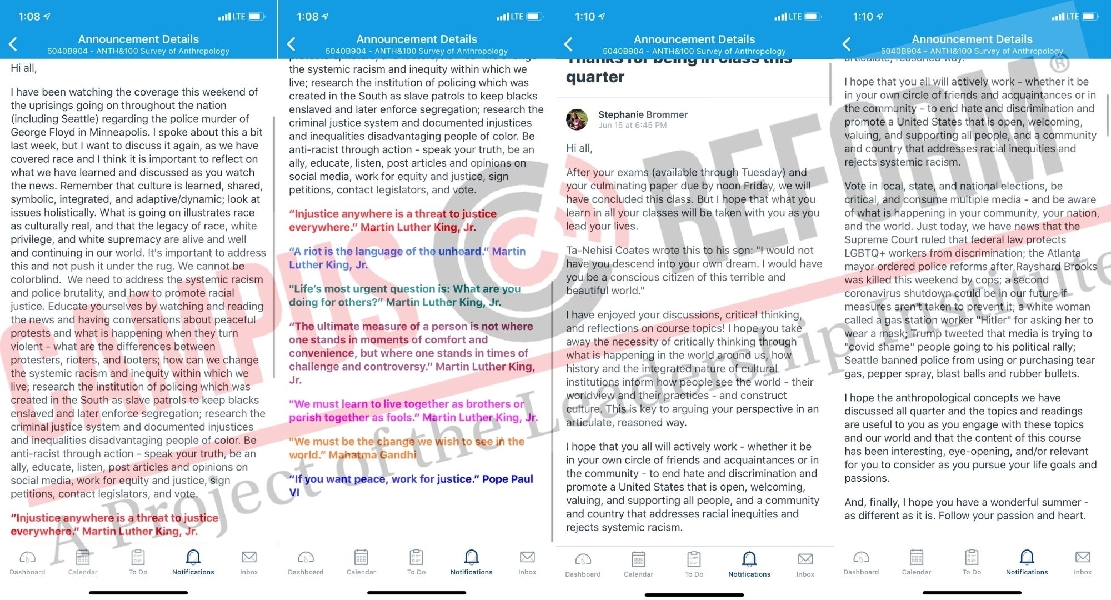 In the next slide, the professor poses questions to the students, asking them “what was it like to focus on privileges, rather than our oppression,” and “How did it feel to have certain privileges but maybe having other areas of oppression?” 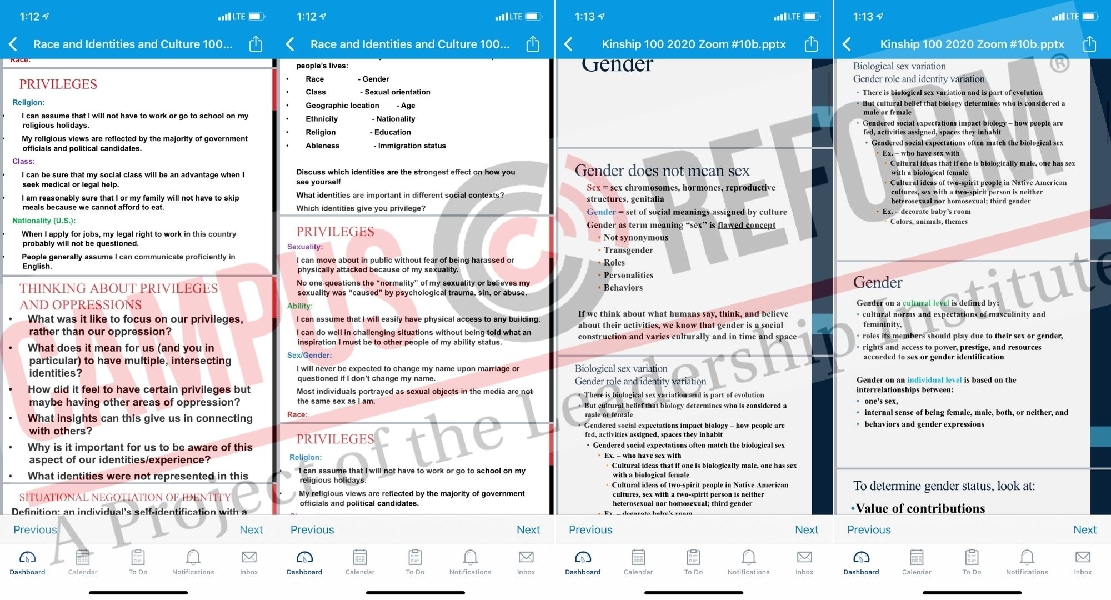 In another set of slides, the professor lays out the differences between gender and sex, stating “gender does not mean sex” suggesting that the meaning of gender as sex was a “flawed concept” and was not synonymous. The professor further suggested gender was defined on a “cultural level” by things like “expectations of masculinity and femininity,” but could be defined on an “individual-level” by “behaviors and gender expressions” and one’s “internal sense of being female, male, both, or neither.”

Campus Reform reached out to Brommer for clarifications about her teachings and student messages but did not receive a response in time for publication.

Jesse Stiller is a Associate Editor for the Daily caller. Previously he was a senior New Jersey Campus Correspondent for Campus Reform. He graduated in December of 2020 from The College of New Jersey with a Bachelors in journalism and professional writing with a minor in political science. Prior to the Daily Caller, he also worked as the Nation and World Section Editor for his college newspaper, the Signal.