The event itself was also disrupted, and the university did little in response, the lawsuit alleges.

The lawsuit stems from an incident in which the group was attacked by leftists while promoting an event with a conservative economist.

Young America’s Foundation (YAF) announced a civil rights lawsuit against the State University of New York-Binghamton for alleged First and Fourteenth Amendment violations. According to court documents, YAF is joined by the Binghamton University College Republicans.

On November 14, 2019, the College Republicans were tabling outside of the University Union to promote a YAF lecture featuring world-renowned conservative economist Art Laffer, who served as an advisor to President Ronald Reagan and was recently awarded the Presidential Medal of Freedom by President Donald Trump.

The College Republicans were quickly swarmed by a group of leftist students who shouted obscenities at them, flipped over their table, and tore their signs. One student, Campus Reform Correspondent Lacey Kestecher, even had her Make America Great Again hat ripped off. According to the lawsuit, none of the leftist students were held legally liable although the university admitted that the students “acted in a manner that may have violated University rules.” However, Campus Reform has seen no indication that those students were disciplined in any way.

Following the tabling debacle, SUNY Binghamton allegedly declined to assure YAF that Laffer’s right to speak would be protected. Further, the lawsuit alleges SUNY Binghamton was aware of plans to disrupt the speech and took no action in opposition. On November 18, Laffer’s speech was interrupted within seconds after a man began accosting him from across the room.

Chaos ensued and Laffer was rushed out of the building by police. Following the events, the university suspended the Binghamton University College Republicans as a campus organization.

“Enough is enough. Universities have a choice to either protect free speech or lose federal funding,” Kestecher said.

[RELATED: Binghamton CRs dealt ANOTHER blow after being taunted, shut down by leftists]

“This is part of a pattern and practice of discrimination against conservative viewpoints on campus at Binghamton. It’s unacceptable,” Michael Ross, Legal Counsel at the Alliance Defending Freedom, said. “Free speech is fundamental to a self-governing society. It is fundamental to us as Americans." 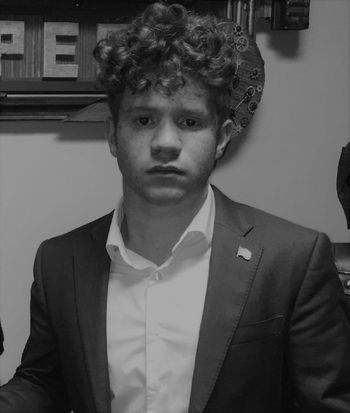