UPDATE: Goldberg has been reassigned to the role of researcher instead of lecturer.

The university has made statements indicating it could take action against him.

An incoming Auburn University professor is under fire for controversial statements about the law enforcement community.

UPDATE: Auburn University spokesman Preston Sparks confirmed to Campus Reform that Goldberg "will not be lecturing" this fall.

"Auburn agreed to Dr. Goldberg’s request that his role transition to a research-focused assignment," Sparks said.

This comes after Auburn University Jay Gogue told the Foundation of Individual Rights in Education that Goldberg would not face disciplinary action: "Auburn affirms that it will not take adverse action against Dr. Goldberg or any member of the Auburn community based on that person’s engagement in individual speech or conduct protected by the Constitution or laws of the United States or the State of Alabama. That is true even when such speech is deemed by many to be offensive, indecent, of little value, and of great cost to the institution. Indeed, even when a message may be viewed as disrespectful and abhorrent, Auburn will not violate the law or Auburn policy."

An Auburn University professor is facing criticism and potential action from the university’s administration after making controversial comments about the police on his personal social media accounts.

Jesse Goldberg, who was recently hired to teach African-American Literature courses, said in a now-deleted post on Twitter, “f*ck every cop. Every single one." He then added, “the only ethical choice for any cop to make at this point is to refuse to do their job and quit.”Goldberg's comment came in response to the viral video showing the arrest of protester Nikki Stone by plainclothes NYPD officers.

Stone has since been released but police say she is responsible for participating in vandalism during recent New York City demonstrations. 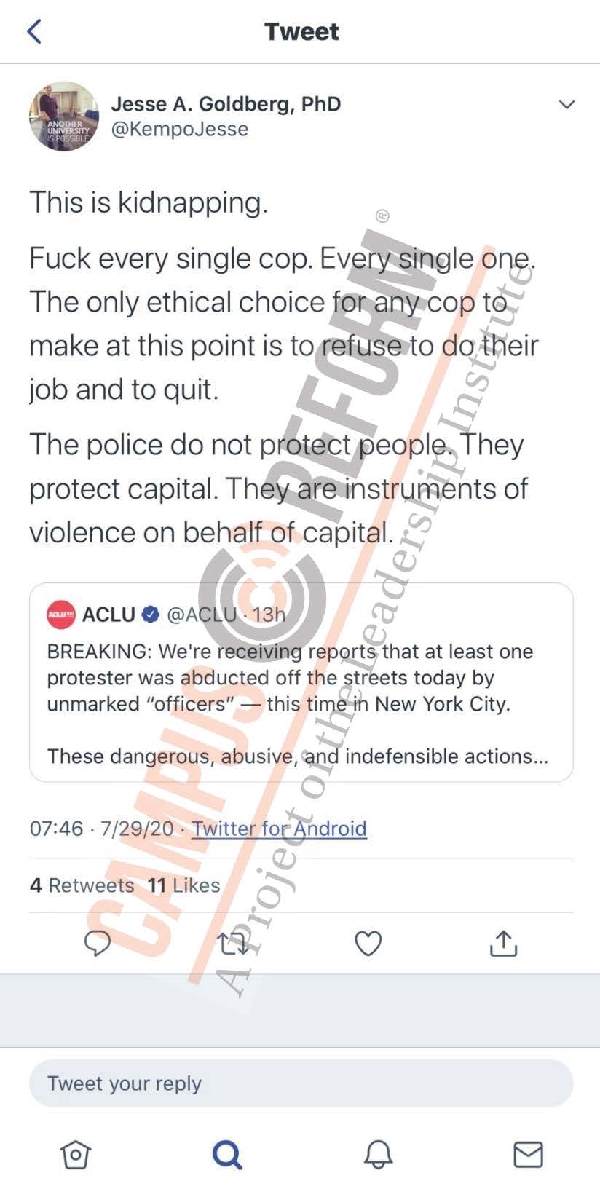 Goldberg also made a post on his personal Facebook page reflecting the statement he made on Twitter.  In the post, provided by Yellowhammer News, he echoed the anti-law enforcement rallying cry that has become popular on the left, “ACAB,” which means “All Cops are Bad,” or alternately, “All Cops are Bastards.”  Stone also spoke about the Stone arrest, describing it as a “brutal display of fascism.”

In the same post, Goldberg also complained about issues unrelated to policing and the Stone arrest, including the Democratic Party’s refusal to adopt the single-payer healthcare proposal known as "Medicare-for-All" as part of its platform. 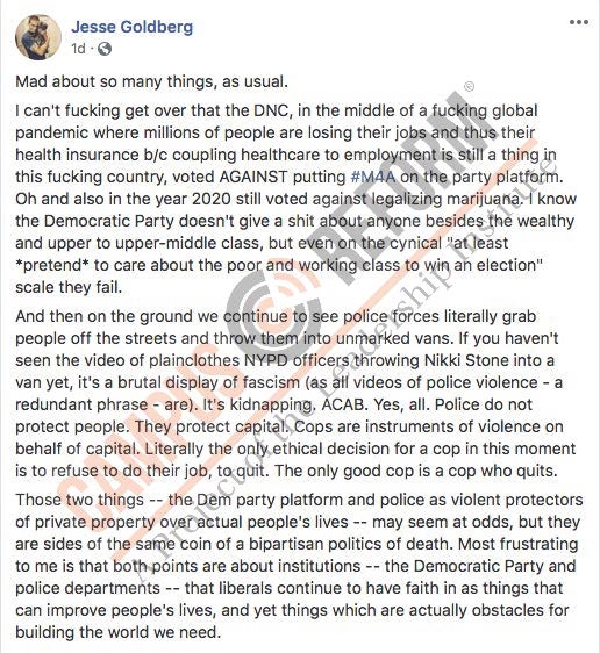 "Hate speech of any kind is simply wrong. Auburn is fully committed to the fundamental right of free speech, but we do not support hateful words or actions that degrade, disrespect, or exclude. Especially during these difficult times in our nation, it’s vital that we reject crude stereotypes and work together to foster mutual understanding and respect within our communities," Keeter said.

"Auburn officials are considering options available to the university," he added.

This isn’t the first time that Goldberg has come under scrutiny for controversial statements.

Previously, he has been ridiculed for saying he would not call himself a "war eagle," referring to the university's popular battle cry, citing issues with using the term "war."

Goldberg received a Ph.D. in English Language and Literature from Cornell University in 2018, and a Master of Arts degree from the same institution three years prior.  While at Cornell, he taught classes for the Cornell Prison Education Project.  More recently, he served as a Visiting Professor at Virginia’s Longwood University.

Campus Reform reached out to Goldberg for comment via email but didn’t hear back in time for publication.