A professor at Texas A&M made several Facebook posts, including one calling President Trump a "fat klansman" and depicting the president wearing an armband resembling those of nazis.

He also said it was a "good thing" that Rep. Louie Gohmert (R-Texas) contracted the coronavirus.

A Texas A&M University professor celebrated on his personal Facebook page that conservative leaders have tested positive for and have died from coronavirus, even expressing hope that President Donald Trump and Vice President Mike Pence contract the virus as well.

Texas A&M anthropology professor Filipe Castro wrote the posts, which expressed distaste for the Trump administration and other Republicans.

“We have a moron as president and everyday [sic] he paints the walls of the Oval Office with his own shit, and the republicans- including Lying Ted [Cruz] and [John] Corny Cornyn- clean the walls and the carpet, wipe the drool of [sic] his mouth, and pretend that he is normal," the professor wrote.

Castro referred to Trump's senior advisor Stephen Miller, former Attorney General Jeff Sessions, Senate Majority Leader Mitch McConnell, and Texas Lt. Governor Dan Patrick, advocating to "lock them in some institution where we don't have to be confronted with their vulgarity and their stupidity."

In reference to Tesla founder Elon Musk, Castro said “we must build that guillotine.” In an earlier post, the professor responded to a tweet from Musk, who he called a "parasite," with “we will come for you, Elon, with a spray for pubic lice.”

Castro also referred to Trump as a "fat klansman,” Melania Trump as “bought from a catalog” and Trump administration officials as “savages and misfits all physically deformed and resentful of their deformities.” 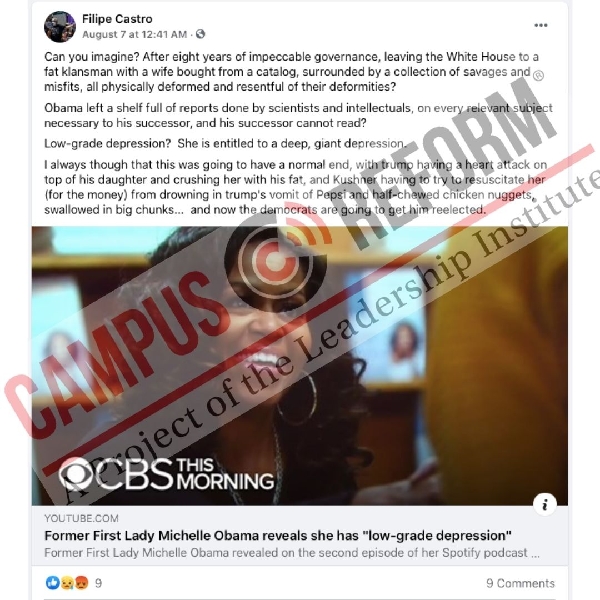 “I always though [sic] that this was going to have a normal end, with trump having a heart attack on top of his daughter and crushing her with his fat, and Kushner having to try to resuscitate her (for the money) from drawing in trump’s vomit of Pepsi and half-chewed chicken nuggets, swallowed in big chucks…,” Castro continued in the same post.

Castro re-posted a picture, shared by colleague Michael Alvard, of Attorney General Bill Barr and Trump outfitted in uniforms resembling those of the nazis.

Campus Reform reported on the arrest of Alvard for allegedly trespassing during a BLM protest in June.

Alvard did not respond to Campus Reform in time for publication. 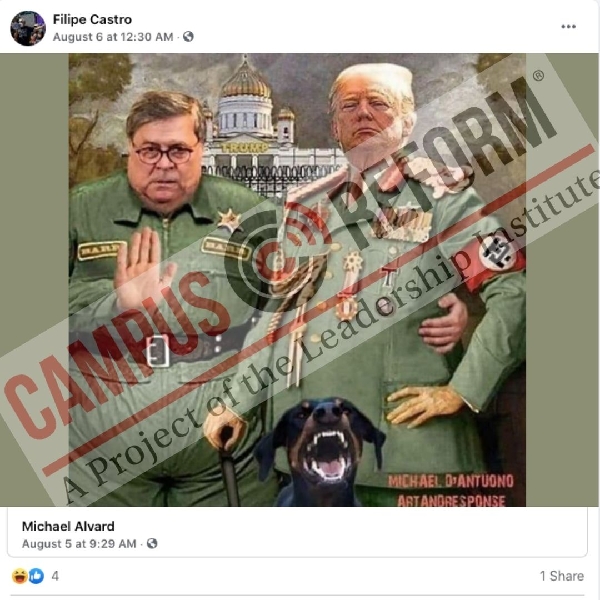 When contacted by Campus Reform, Castro defended his comments and called Trump a “small time crook.”

“What are you? The Spanish Inquisition? Have you read the Constitution? My comments are public, as you can see,” Castro said. “I find this president disgraceful, a compulsive liar, a repugnant misogynist, a racist, and a small time crook. And i [sic] find most fundamentalist Christians enemies of freedom, truth and reason. And I find religion - as practiced by fundamentalists - the exact opposite of religiosity: something dumb and prescriptive that prevents people from thinking and feeling.”

According to Castro, Trump supporters “don’t count on the government for anything, except bombing poor countries.”

“To the right, as long as African Americans and women are treated like shit, everything is fine,” another post read.

In the midst of COVID-19, the professor said it was “good news” that Rep. Louie Gohmert (R-Texas) contracted the virus.

“In the last 59 years I thought that desiring other people’s death was a horrible thing, but president trump showed me how wrong I was. :) Now I am like: I hope this is true, and that [Brazilian President Jair] Bolsonaro dies, but that its [sic] takes a month, and that Trump and Pence get it too,” Castro said.

Castro also took several shots at religion, describing it as a “neurological defect" and "magic thinking."

Castro superficially targeted Catholic priests, whom he generalized as being pedophiles.

One of Castro’s posts, written in Portuguese, translates to “the priests are asking for it again…” He clarified in the comments about what they are asking for: "A two by four in their backs. On and on, until we are too tired."

He also stated that evangelicals want to “execute” non-evangelicals “in the public squares.”

“We all would prefer if there were no mosques, no churches, no synagogues, just libraries and museums. And ethnic restaurants,” Castro stated.

In an earlier post, Castro said, “I want to watch the comet, but the Catholic compound (st. something) is covering the horizon… and I have matches, but I don’t have gasoline.”

Brendan Cassell, a senior at Texas A&M, told Campus Reform that, as a Catholic, he finds the posts "extremely grotesque and disturbing."

“They show a deep disdain for the Church that goes beyond hateful rhetoric by entertaining the ideas of assaulting priests and burning down churches,” Cassell said. “I don't believe any of his practicing Catholic students knowing what he posts could feel respected in his class. His posts clearly don't reflect the Texas A&M core values.”

Castro also took to Facebook to express his distaste for law enforcement.

“My daughter worked in a restaurant and they would come, eat like pigs, make abusive and lewd comments on the waitresses, and leave without paying. And they left the car on outside, all the time, polluting and wasting money,” he said.

Texas A&M University did not respond to Campus Reform’s request for comment in time for publication.

According to Castro's reviews on RateMyProfessors.Com, Castro talks about politics too much during class.

“DO NOT TAKE THIS CLASS IF YOU ACTUALLY WANT TO LEARN. Dr. Castro does not teach at all. He will only talk about politics and ramble through the entire class,” one review stated.

Another complained that Castro “really didnt [sic] teach the material, just his own ideas.”

Another said, "He instead of teaching about the world taught about everything he thought was wrong with America from politics to religion."