Students at the University of Richmond are calling for the abolishment of Greek life on the campus.

A petition calling for the abolishment of the Interfraternity and Panhellenic Greek Life (IFCPF) Organizations on the University of Richmond campus has amassed more than 900 signatures.

A “group of UR BIPOC womxn” wrote an Open Letter of Group Disaffiliation to the UR community that called for the abolishment of Panhellenic and IFC Greek life at the university “due to its misogynistic, racist, classist, ableist, heteronormative, and myriad of other damaging characteristics that are intertwined in its history and existence.”

"We have realized, through our personal experiences and those of our peers, that the social power that Panhel and IFC hold is toxic and damaging to the individual, and to the University of Richmond community—but especially those who are not involved with Greek life," the letter stated.

[RELATED: Yale art installment aims to ‘confront’ the school’s past without erasing history]

Amid a push to abolish Greek life that has extended nationwide, University of Richmond students pledged to end their membership after an Instagram page, @abolishrichmondgreeklife, shared stories of “homophobia, misogyny, racism, sexual assault/harassment, rape, etc.” that allegedly happened at sorority events.

According to the Collegian, the student newspaper at UR, multiple posts came from anonymous sources and detailed accounts of alleged sexual violence and racism by unnamed members of Greek life. 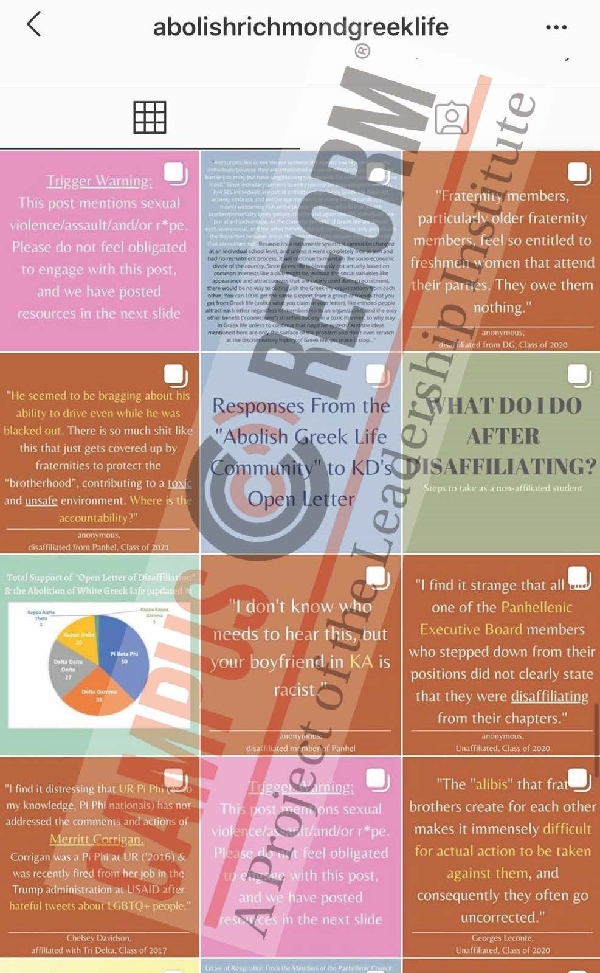 In response to calls for a “reform” of Greek life instead of “abolition,” the letter stated, “This history will always be present, making it a flawed system that is unsafe for the people for whom it was not built. IFC and Panhellenic Greek life was never designed to include BIPOC, the LGBTQ+ community, low-income students, etc. It is not broken; it was built this way, and has always functioned under its initial purpose. As we, womxn of color, disaffiliate from our chapters, UR Panhellenic organizations will only become whiter and more affluent.”

A month after the petition was made, all members of the Panhellenic Council at the University of Richmond resigned, according to the Collegian.

“We have read about and understand the violence against womxn on our campus that has occurred by Interfraternity Council chapter members and we no longer wish to be associated with the IFC community as leaders within Panhellenic,” the group wrote.

While Greek life will look different due to dwindling enrollment and students pledging to quit their sorority or fraternity, the upcoming fall semester presents another obstacle: COVID-19.

In response to the upcoming academic year and how Greek life will change, Dani Weatherford, CEO of the National Panhellenic Conference told US News, "We feel like in the pandemic and this virtual atmosphere, our organizations are more important than ever before, to assist students in building relationships and to get to know other students."

Not all is lost for Greek life. According to Weatherford, some chapters have seen a spike in membership, even as recruitment has gone virtual.

Campus Reform reached out to the University of Richmond for a response but did not receive a response in time for publication.