Another professor at the University of Wisconsin Madison said that Trump is a “climate terrorist, traitor, and mass murderer.”

A professor at George Washington University said that President Donald Trump is guilty of "negligent homicide."

George Washington University Professor of Medicine Jonathan Reiner stated on CNN that President Donald Trump is guilty of “negligent homicide” by hosting rallies around the country, while another professor at the University of Wisconsin-Madison, Zach Peery, took to Twitter to call Trump a “climate terrorist, traitor, and mass murderer.”

During an interview on CNN with Erin Burnett, Reiner stated that while Trump’s rally in Tulsa, Oklahoma in June was considered “criminal endangerment," rallies now are “negligent homicide.” When asked during a second interview with CNN why it was “negligent homicide’ Reiner stated, “Well that’s what you call the actions of somebody who through their negligence causes the death of other people.”

Reiner goes on to imply that Trump wanted people to get COVID-19, stating “…if you were trying to somehow increase the amount of virus in the community, what you would do is you would gather thousands of people, shoulder to shoulder, without masks and have them scream and yell and laugh for a few hours.”

"That's what the president did," he added.

He goes on to say that shutting down travel from Europe altogether was a good move, but states, “…that wasn’t some sort of extraordinary move, that was a standard move within an evolving pandemic like this one.”

Trump announced the travel restrictions from China on January 31 in response to COVID-19, and on February 1, former Vice President Joe Biden criticized Trump by tweeting, “We are in the midst of a crisis with the coronavirus. We need to lead the way with science — not Donald Trump’s record of hysteria, xenophobia, and fear-mongering…”

Perry took to Twitter and stated, “Donald Trump is a climate terrorist, traitor, and will go down in history as a mass murderer. There, I said it and stand by it – feel free to put me on Fox News as a crazy liberal professor or report me. No need to like or retweet – I feel better just saying it.” 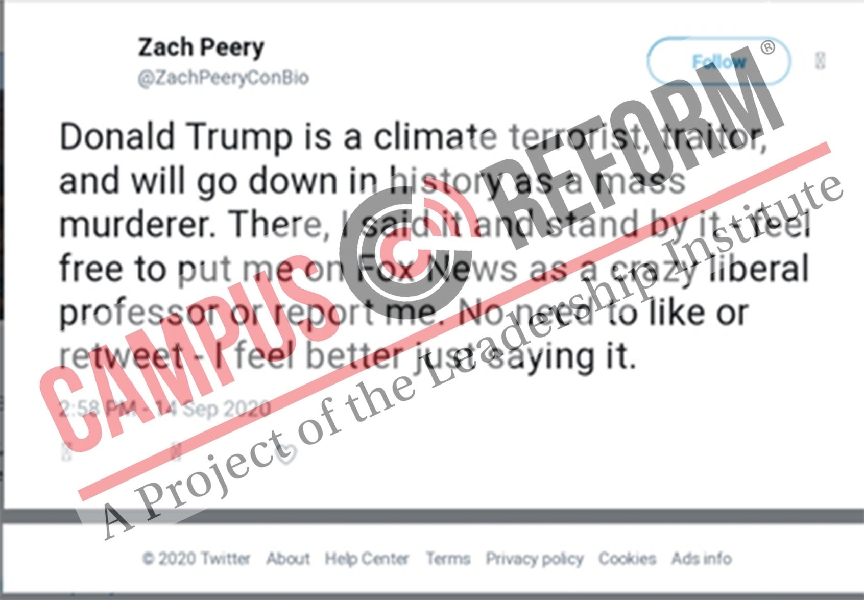 When Campus Reform reached out to Peery for comment on the story, he stated, “that was just an off-the-cuff tweet and not really sure I want to elaborate further in an article.”

The University of Wisconsin-Madison told Campus Reform that staff members have the right to express their opinions.

“Students, faculty, and staff all have the right to express their own opinions on social media. When they do so, they are speaking for themselves, not the university.”

Campus Reform has also reached out to Reiner and George Washington University for comment but did not receive responses.