A University of California English professor called on her followers to burn a book that documents the transgender movement.

A University of California-Berkeley English professor encouraged her followers to purchase a book criticizing the transgender movement, then “burn it on a pyre.”

Following criticism, Target removed Abigail Shrier’s book Irreversible Damage: The Transgender Craze Seducing Our Daughters, which discusses the effect of the transgender movement on young girls, from its site on Nov. 12. However, the department store chain reversed its decision the next day, returning the book to its shelves.

University of California-Berkeley English professor Grace Lavery criticized those who approve of the book’s message: “If you don’t think the phrase ‘transgender craze that’s seducing our daughters’ is transphobic, I presume it is because you don’t believe transphobia is real.”

Lavery then pointed out that Target does not carry many academic works about transgenderism. 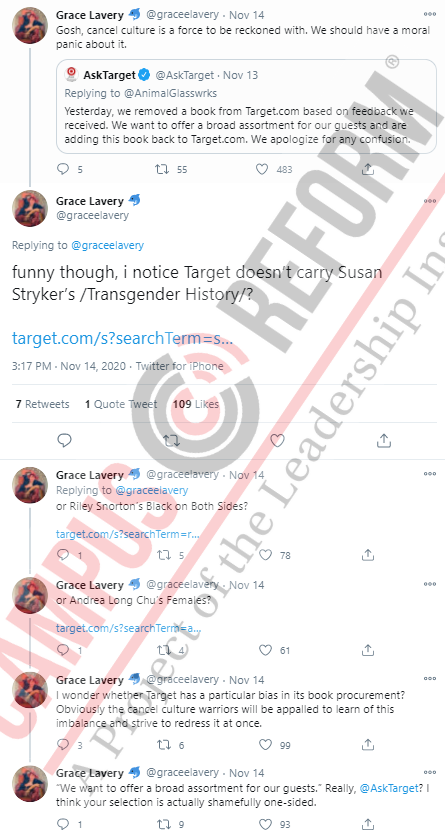 She then called upon her followers to “steal Abigail Shrier’s book and burn it on a pyre.”

Lavery referred Campus Reform to another thread on her Twitter page, in which she backed down and insisted that her tweet was intended to be interpreted as "irony.”

"If you think I was sincerely encouraging people to burn books, I suggest you look around and see how many books were actually burned. Either my words weren’t taken seriously bc I was misunderstood, or they were meant not to be taken seriously. You can figure this out yourselves," Lavery said.