UT lets students decide if they want to keep their final grade, despite 'unintended consequences'

The University of Texas will allow pass/fail grading for the fall semester.

However, the provost said that choosing to take a "pass" grade may have “unintended consequences."

In response to the University of Texas Faculty Council and Student Government, university President Jay Hartzell approved a resolution allowing students to opt to be graded on a pass/fail basis, rather than the traditional A-F scale.

The resolution cites the “lack of opportunity to collaborate with other students,” the “extra effort” having to be put in for “social cues interpretation,” the loss of jobs, “depressive thoughts,” and “disruptions in sleeping patterns” as reasons the resolution should be passed.

J.R. 20-05 “urges” the Faculty Council and the university to act by giving students the option to change their course grading scales to pass/fail and extend the deadline for Q-drops “to one week after final grades are submitted.” Should the student decide to Q-drop a course, the drop would not count towards the “6-drop limit" the student's grade for that course would appear on their transcript as "Q."

The University of Texas Faculty Council Chair and professor Anthony L. Brown filed an emergency resolution endorsing J.R. 20-05, but the resolution only addressed changes that would take effect for fall 2020.

The Faculty Council’s resolution concurred with the student’s joint resolution for fall 2020.

“Students who wish to [change to pass/fail] will have until Wednesday, December 9, 2020, to meet with their academic advisor to change a course from a letter grade to Pass/Fail or to Q-drop,” the resolution states.

“All Q-drops will be treated as non-academic Q-drops. A Q-drop granted in Fall 2020 will not count toward a student’s allowable total of six Q-drops,” the resolution continued.

The Faculty Council’s resolution passed during an emergency meeting on November 23.

According to the Daily Texan, 39 council members voted to approve the resolution, 12 voted against, and 7 abstained.

In an announcement made by Interim Executive Vice President and Provost Daniel Jaffe, UT President Jay Hartzell approved the resolution for fall 2020 and spring 2021.

Undergraduate students may now change the grading of a total of three classes during both the fall and spring semesters to pass/fail.

Before students make a decision to change the scale on which they're graded to pass/fail, they will be able to view their final grades.

“[Students] using a COVID-19 Pass/Fail Exception will allow the class to count toward degree and course requirements, where a standard Pass/Fail will not,” one exception states.

Jaffe notes that the change may have “unintended consequences” however.

“It is also important to keep in mind how classes taken with a grade of “P” (Pass) will be treated by graduate and professional school admissions, licensure requirements, and others. It is therefore recommended that you work with your advisor to make this decision, as changing a letter grade to Pass/Fail may have unintended consequences,” Jaffe states.

When the author of J.R. 2025, Leland Murphy, learned of Hartzell’s approval, he told Campus Reform that he was “ecstatic.” However, he was “disappointed” that the final resolution was a “weaker ‘compromise.’”

“It is less about the policy administration ended up implementing rather than it is about the principle. President Hartzell repeatedly deferred to the Faculty Council to make this decision and then when they did and voted in favor of our proposal which students had organized for, they didn’t end up implementing it and very anti-democratically went with what he wanted,” Murphy said.

Campus Reform was provided with an infographic from Leland Murphy, comparing the resolutions. 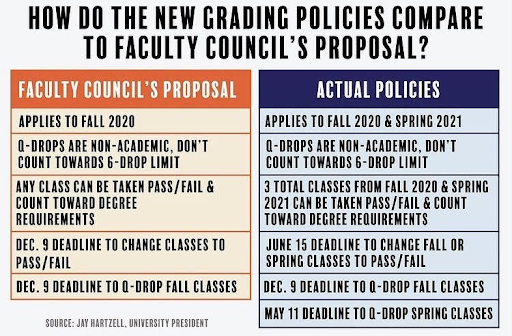 “Similar issues have been raised at many universities this fall, including at our peer state flagship universities. We want to support the student circumstances we are hearing about in a way that we feel is responsible and feasible given where we are in the semester,” Bird said.

When asked if students should have been better prepared for the semester, Murphy told Campus Reform that he thinks “students were prepared as much as we could be.”

“To be honest, this semester was just as bad as spring or even worse. Many of the same problems still persist. Cases are currently surging. Students and their families are sick. The economy is in shambles. Students are displaced at home still. Nothing is ‘normal,’” Murphy concluded.