The Students for Trump president at Texas A&M University received a letter from the school after he placed a Trump sign on public property, informing him that he is "required" to meet with the Student Conduct Office.

The letter, a copy of which Campus Reform obtained, states that if he does not attend, he could face student conduct charges and his registration placed on adminstrative hold.

The president of Students for Trump at Texas A&M University received a letter from the Student Conduct Office requesting a meeting after he and other club members placed pro-Trump signs on “public property."

If he does not attend the meeting, he could face student conduct charges.

Texas A&M junior and Students for Trump president Dion Okeke told Campus Reform about the events that led up to the letter he received from the Student Conduct Office.

On the eve of election night, November 2, Okeke and four Students For Trump members spent the evening placing “Trump 2020 Keep America Great” signs around campus until police officers with the University Police Department approached the students telling them “to remove the signs due to ground damage.”

After speaking with their supervisor, the university police officers gave the students “full permission to continue placing signs” according to Okeke.

“This is when a university police officer took down my number in order to later provide me with all the rules of placing signs on campus. One month later, the Texas A&M administration decided to email me regarding ‘placing signs on public property,’” Okeke said.

Okeke received a letter via email from Student Code of Conduct Office Assistant Coordinator Jessica Welsch after information was “forwarded” to her office about “placing signs on public property on or about November 2, 2020.”

Campus Reform obtained a copy of the letter. 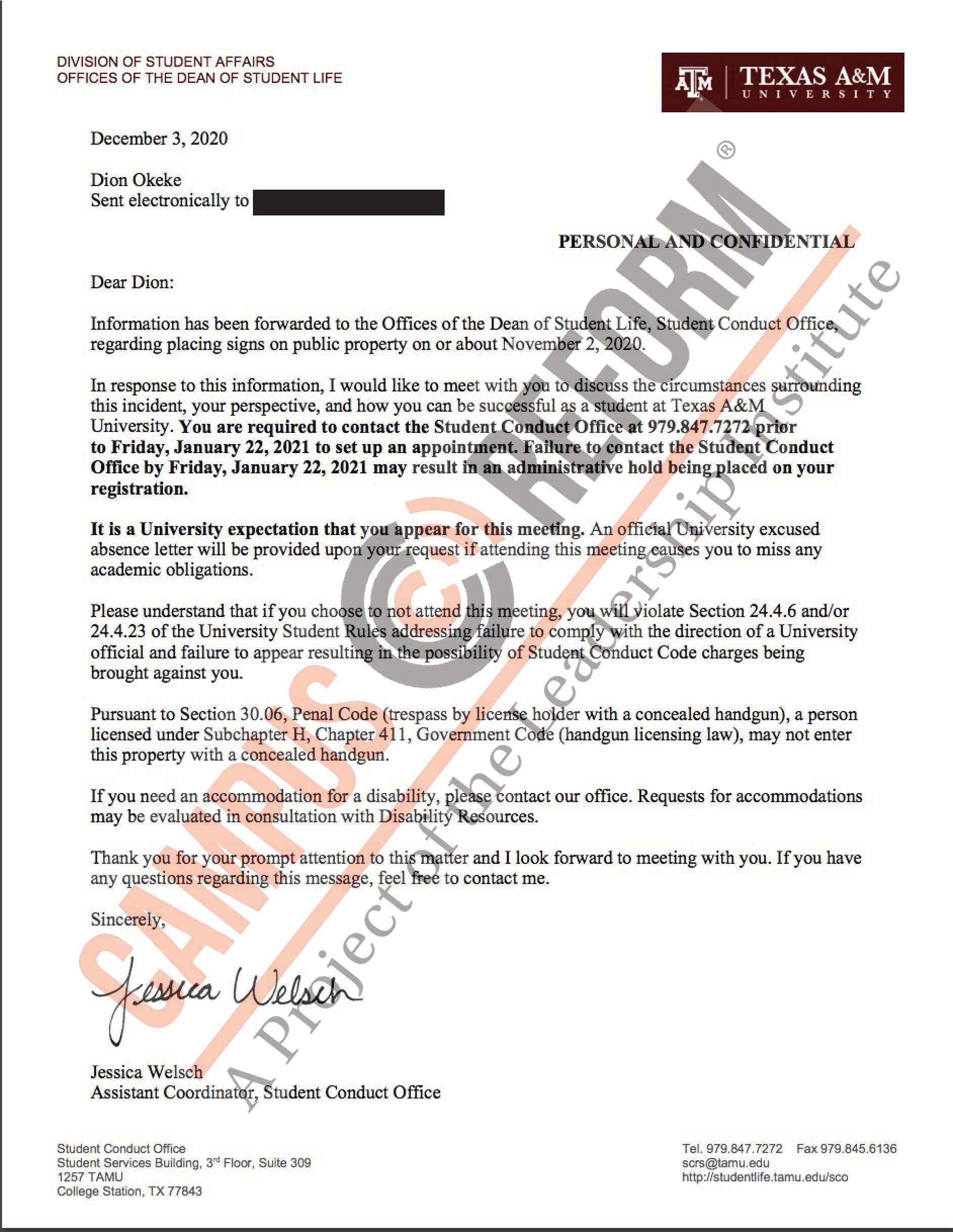 “In response to this information, I would like to meet with you to discuss the circumstances surrounding this incident, your perspective, and how you can be successful as a student at Texas A&M University,” Welsch wrote.

Okeke is “required” to reach out to the Student Conduct Office by phone before January 22, 2021 to schedule the meeting, or an “administrative hold [may be] placed on [his] registration.”

Attendance at the meeting is not optional for Okeke as Welsch cites the “possibility of Student Conduct Code charges being brought against [him].”

Dean of Student Life at Texas A&M Anne Reber told Campus Reform that the letter was in response to a “reported incident” and the meeting would give Okeke a chance to “share his perspective.”

“Generally speaking, there are times when University officials will reach out to students in order to engage in educational conversations that are not punitive in nature. These conversations are designed to give students the opportunity to share their perspective on a reported incident, as well as assist them in understanding their rights and their responsibilities in order to best meet their goals,” Reber said.

Reber addressed the language used in the letter and said she is going to look into the matter.

“When these meetings are scheduled, it is common to use a template form letter, which in this case, may have been the incorrect form letter to use. I have my staff following up on that issue,” Reber revealed.

“[The letter] doesn’t sound like reasonable and rational people that simply wish to ‘talk,'" Okeke told Campus Reform. "I believe this email was sent in order to intimidate and discourage any student who wished to express their right-leaning political ideology through the use of signage on campus. It was clear, given the nature of the email, Texas A&M was not looking to sit and have a civil conversation about the matter but rather to ensure I was to never place any signs again."

Following Okeke’s receipt of the letter, Okeke told Campus Reform that he received a call from the program coordinator at the Office of the Dean of Student Life Jaclyn Upshaw-Brown “explaining that they only wished to ‘talk’ about the incident.”

He said Upshaw-Brown told him that the email was a “reaction of the police report that had been made.” But Okeke said that no police report was made the evening in question.

Okeke told Campus Reform that the Students For Trump signs are not present on campus any longer and that he is not aware of who removed them. However, other campus organizations’ signs are still standing.

Campus Reform obtained photos of current signs being displayed on campus in the same areas where the Students For Trump signs were placed. Those include Black Lives Matter and gay pride flags in the windows of the academic building at the center of campus.

“The current Texas A&M administration has been clear with their biases. They allow signs for ‘Draggieland,’ a drag show on campus, but won’t allow the promotion of the President of the United States. No rules were broken in the placement of our signs, in fact, there were signs placed in the locations we had placed. This is yet again an act to censor conservative students at Texas A&M,” Okeke said.

“It seems liberal activists are free to organize, march, and speak as they please while conservative speech is labeled as violence by the woke mob. Rather than focusing on censorship, administrators should focus on making A&M a place where the free exchange of ideas is cherished,” Sattler said.

Okeke said that this is not the first time his signs have been a center of controversy as students have destroyed their signs by stomping on them.

Okeke provided Campus Reform with a photo of a student jumping on one of his group's signs in the middle of campus.

“There has been a disturbing trend in recent years of universities across the country cracking down on the free expression of conservative speech and ideas. It is sad to see administrators at the university I love taking us down that same dark path,” Sattler concluded.