Ithaca College’s student newspaper asked the president of the school’s College Republicans chapter to write an op-ed addressing the results of the 2020 election.

After backlash, the student newspaper removed the article.

The outlet later republished the op-ed, but with one noticeable omission.

The student newspaper at Ithaca College in Ithaca, New York asked Michael Deviney, president of the school’s College Republicans chapter, to write an op-ed addressing the results of the 2020 election from a conservative perspective.

However, the outlet removed the op-ed within 24 hours of publication, claiming that the article spread “false statements regarding voter fraud.”

Deviney sent screenshots of the original op-ed to Campus Reform. The piece, published on December 6 by The Ithacan, detailed examples of young, Hispanic, and African-American Republican candidates emerging victorious on election night. 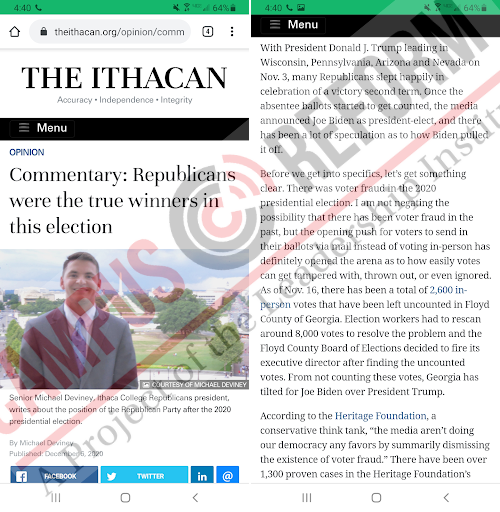 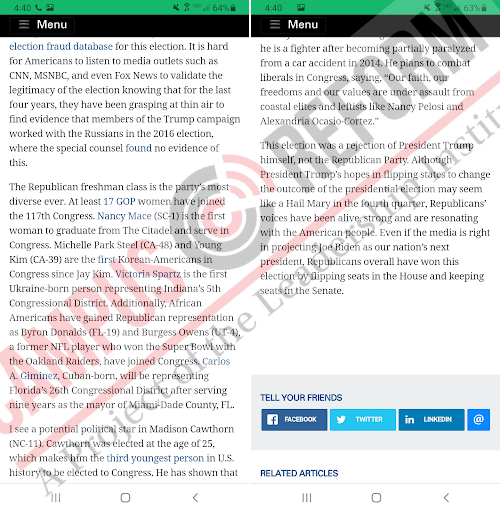 Citing the Heritage Foundation’s database of 1,300 recent voter fraud cases, Deviney also mentioned that there was substantial evidence of voter fraud in the 2020 election.

On December 7, however, The Ithacan removed Deviney’s article.

“Deviney’s description of the outcome of the 2020 presidential election presented as facts a number of demonstrably false statements regarding voter fraud as the grounds for his opinions,” explained an editor’s note published by The Ithacan. “President Donald Trump and Republican allies have been attempting to overturn the 2020 presidential election results by using claims of voter fraud as a political tool. However, these claims of wide-spread voter fraud are not substantiated. While there have been some instances of voter fraud, it is extremely rare.”

“It is in no way our intention to suppress the opinion expressed in Deviney’s piece,” insisted the editorial board.

Madison Fernandez, Editor-in-Chief of the Ithacan, told Campus Reform that the publication’s “general policy about running commentaries is that they are from people with expertise or relevant direct experience with an issue.”

Fernandez said that the outlet encourages a “wide range of opinions,” but does not “provide a platform for the dissemination of demonstrably false or unsubstantiated factual claims.” The editorial board asked Deviney to make “factual corrections” to the op-ed before it could republish it.

Deviney told Campus Reform that he believes this incident is an example of censorship.

“In their Editor’s Note, they accuse me of ‘a number of demonstrably false statements regarding voter fraud as the grounds for my opinions” and agreed with my claim that there was voter fraud in the election by saying, ‘while there have been some instances of voter fraud, it is extremely rare,’” said Deviney. “Also, in their Editor’s Note, they claim that ‘the commentary has been taken down to avoid the further spread of false information,’ but I feel like they only said that in regard to false statements being said against the wellbeing and credibility of the Ithacan and are too afraid to give out a piece that isn’t a part of their liberal agenda.”

“They are also too afraid of losing their audience,” he added. “If we had school in person, there is a chance that this type of backlash could have erupted into violence.”

Deviney also explained that the general disposition of Ithaca College’s students and professors “are to always prompt free speech towards conservatives and Republicans,” although “this does not necessarily mean that they respect your opinions.”

As an Ithaca College student, Deviney has “always been careful in expressing my views in class,” even though he has been encouraged to speak his mind.

“There has been an overwhelming outreach of support from students as well as the college advocating the BLM movement by offering the student body a safe space called ‘Anti-Racist Workspace for White-Identifying Students,’” he explained “This workshop is meant to teach students in being aware of their prejudices and in speaking out against homophobia, sexism, bigotry, and racism. It seems like the school does not show the same sympathy and empathy where it comes to speaking out against falsely being called a Nazi.”

On December 11, The Ithacan allowed Deviney to publish a modified version of the op-ed, which contained more detailed information about voter fraud allegations. Most notably, Deviney’s original assertion that “there was voter fraud in the 2020 election,” was absent.

Campus Reform reached out to Ithaca College for comment; this article will be updated accordingly.