A professor is suing St. John’s University after students accused him of racism for a question about slavery.

The professor — a former NYPD officer who served during 9/11 — says that the university violated its own policies while investigating him and violated his right to free expression. 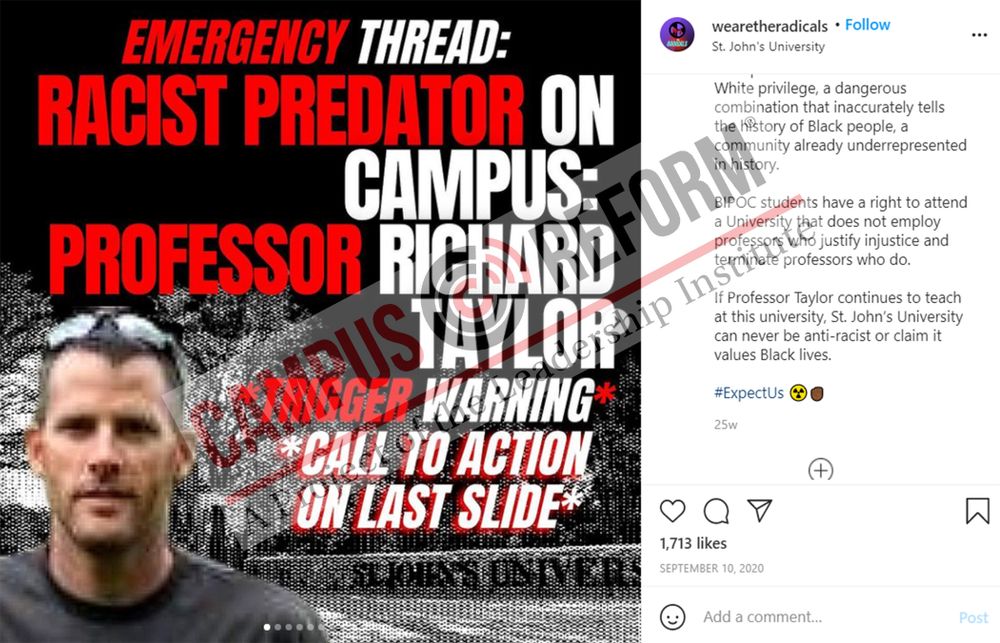 A professor is suing St. John’s University in New York City after students found his lecture questions about slavery to be inappropriate.

On September 7, former history professor Richard Taylor gave a presentation for his class “History 1000: Emergence of a Global Society,” according to a letter from the Foundation for Individual Rights in Education sent to administrators on October 8.

During the lecture, Taylor discussed the Columbian Exchange — the transfer of plants, animals, disease, people, and culture following Christopher Columbus’s voyages — as well as its positive and negative implications for world history. FIRE counsel Adam Goldstein told Campus Reform that the university never responded to the letter.

The final slide of the presentation asked if the “positives justify the negatives.” In response, an Instagram account called “SJURadicals” claimed that Taylor was a “RACIST PREDATOR ON CAMPUS” who “forced students to formulate a pros and cons list concerning the topic of slavery.”

Taylor — a former NYPD officer who served during the 9/11 terrorist attacks — was unceremoniously fired from his position over an October 9 Zoom meeting that lasted for five minutes, according to Taylor’s lawsuit.

Ronald G. Russo — the attorney representing Taylor — is a St. John’s Law School alumnus who sponsors a scholarship at the school. Russo told Campus Reform that upon reading a petition to reinstate Taylor, Russo offered to represent him on a pro-bono basis.

In addition to violating policies that prohibit the firing of a professor in the middle of the semester, the suit states that the school’s highest priority was the appeasement of the SJURadicals. The suit also says that St. John’s University is violating its own policies on free speech and inquiry.

FIRE's letter details the school’s professed commitment to free expression in its letter. For instance, St. John’s mission statement expresses a commitment to “academic excellence and the pursuit of wisdom which flows from free inquiry, religious values, and human experience.” The school also promises affiliates “the right to freedom of speech and expression that is consistent with the University Mission and its Catholic character and Vincentian tradition.”

Taylor told Campus Reform that this situation has important implications for free speech in academia.

“I think it will impact the way teachers teach, and what they teach. They will avoid topics that might raise tough questions,” he explained. “The questions that get students to think about history from multiple perspectives, and get students conversing and thinking.”

"You can’t simply tar and feather an academic," he said.

In discussing Taylor’s police service — which included several hundred hours of responding to 9/11 — Russo commented that he is a “very good man.”

“I’m a left-of-center guy. As I see it, this is not a left or right view,” said Russo. “This is not a conservative or liberal view. This is the ability to think freely. Universities are supposed to be engines of knowledge. The idea that we are at a stage in this country where if anybody says anything that annoys the far left or the far right they get cancelled, that can’t continue.”

Goldstein explained to Campus Reform that “St. John's promised academic freedom and due process and didn't deliver either one.”

“In most cases, private universities, including private religious universities, have the ability to choose how much freedom of speech they offer their employees and students,” he said. “So the implication, I think, is that universities in New York should expect to be held to the promises they make.”

Campus Reform reached out to St. John’s University. This article will be updated accordingly.