A new course at Florida State University pledges to examine the “weaponizing” of White womanhood.

A poster promoting the course features an emoji-character with a stereotypical "Karen" hairstyle.

Trending
1
Stanford band mocks Christians during halftime show
By Thomas Stevenson '23
2
Harvard Law instructor: 'It is our civic duty to accost' the '6 justices who overturned…
By Blake Boudreaux  '25
3
UChicago announces 'The Problem with Whiteness' course
By Caroline Cason  '22
4
Steven Crowder delivers fake ‘Fatness as Self-Care in the Era of Trump’ paper in drag a…
By Katelynn Richardson  '22
5
Will Witt responds to students' accusations that he is a 'fascist'
By Kate Anderson
6
College drops disciplinary charges against conservative student
By Toni Airaksinen
Wyatt Eichholz '24 | Senior Alabama Campus Correspondent
Saturday, March 27, 2021 5:00 AM

An upcoming class at Florida State University promises to examine the “weaponizing” of White womanhood. According to a flyer for the summer 2021 section of WST 4930, the discussion will cover the “History of Karen.”

The poster includes a cartoon portraying an emoji-character with a stereotypical hairstyle alongside an image of women draped in Klan hoods.

[RELATED: College hosts ‘community radical’ who claims White people must be willing to say ‘I am a racist’] 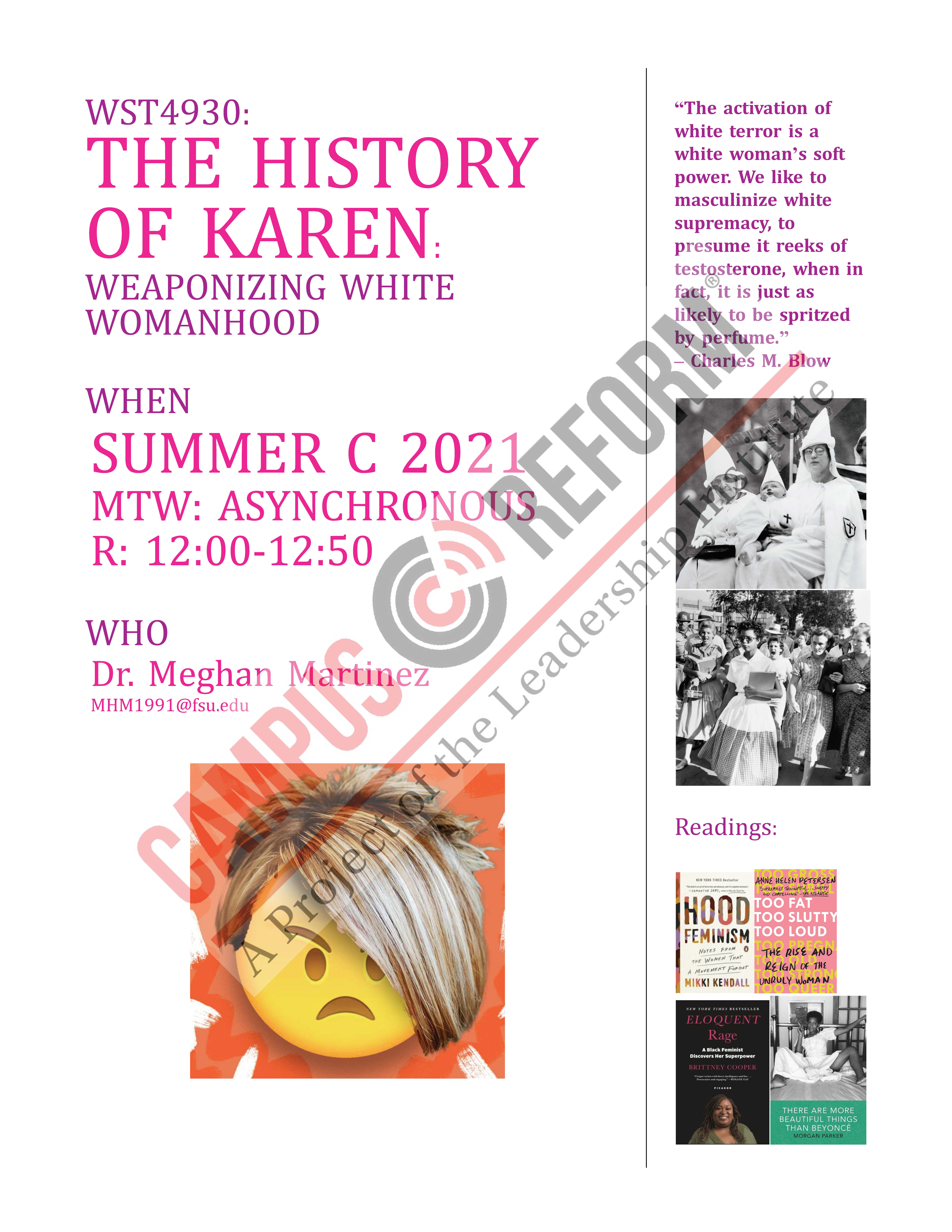 “The activation of white terror is a white woman’s soft power,” the poster reads. “We like to masculinize white supremacy, to presume it reeks of testosterone, when in fact, it is just as likely to be spritzed by perfume.”

The course is slated to be taught by Megan Martinez. According to her profile, “she primarily researches the history of racial violence and racial inequality in the US and its legacies.”

Florida State University and Martinez did not respond to a request for comment by Campus Reform.