A UM law student has been campaigning for the college to release a statement on anti-Asian racism. 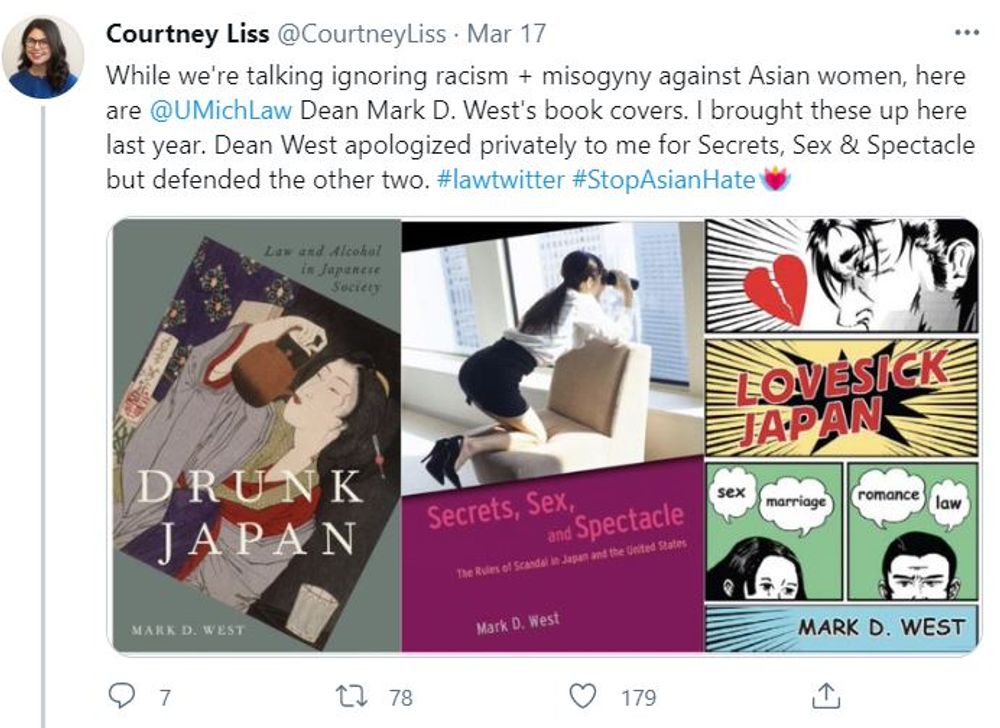 At the University of Michigan, a dean under fire for "offensive characterization" of Asians has issued an apology calling himself “part of the problem.”

Michigan Law Dean Mark West has published several books on Japanese culture, including Secrets, Sex and Spectacle: The Rules of Scandal in Japan and the United States and Lovesick Japan: Sex, Marriage, Romance, Law. After pushback over the book covers, the dean announced in an email to students that the covers will be redesigned.

Courtney Liss, a third-year University of Michigan law student, shared tweets on March 17 about the book covers and her March 16 email to the college’s deans, calling on them to release a statement about “anti-Asian xenophobia and racist attacks.”

Liss has been rallying for the book covers to changed for three years.

A statement released by West on March 17 discussed inequalities, the Atlanta shooting, calling on the community to “eliminate anti-Asian sentiment and all aspects of racism.”

Days later, the dean shared with UM law students how his books on Japanese culture have “contributed to a narrative that promotes a two-dimensional and offensive characterization of people, and especially women.” The email, published by Above The Law, states that the dean initially saw the covers as “edgy,” but began changing the book covers in spring 2020.

“We as an institution have been grappling with the structural racism in American life and with our own role in addressing it...I have been reflecting on choices I have made that are, quite simply, part of the problem,” Dean West said in the email.

West shared that he found himself “increasingly uncomfortable” with the imagery and believed the books would have gone out of print sooner. The dean is now working with the publishers to completely change the covers on his books and on the publisher’s website.

“I am glad to see Dean West is recognizing the racist and sexist stereotypes that his book covers portrayed and working to change the book covers,” Liss told Campus Reform. “This is a great step in creating a more equitable law school and I hope to see Dean West and the rest of the administration continue to confront these issues as they arise.”

Campus Reform reached out to West and the university for comment; this article will be updated accordingly.