The University of Pennsylvania announced measures to achieve net zero in its fossil fuel investments by 2050.

Student activists demanded that the change occur by 2025 — four years from now.

The University of Pennsylvania pledged to make its endowment portfolio carbon neutral by 2050. Many students, however, are criticizing school officials for not entirely divesting from fossil fuels.

On April 7, administrators sent a message to the Penn community explaining that the school’s Office of Investments “has established the goal of reducing the net greenhouse gas emissions from Penn’s endowment investments to zero by 2050” in accordance with the 2015 Paris Agreement.

“We expect that progress toward the endowment’s net-zero goal will occur both through emissions reductions at the many hundreds of companies in which the endowment is invested, as well as through the redeployment of capital towards investments with low or improving carbon footprints,” the email said. “Any residual emissions across the endowment’s holdings would need to be offset, ideally through investments in enterprises that remove carbon from the atmosphere.”

The university is taking great pains to calculate and measure its investments’ encouragement of greenhouse gas emissions.

As the email explains, “this is a complex undertaking, and achievement of our goal will require significant efforts across many fronts.” The Office of Investments “anticipates collaborating with Penn faculty experts, with organizations developing frameworks and accounting standards, and with other institutional investors who have similar goals.”

Students quickly released a statement declaring that the university ought to be more aggressive.

The Student Sustainability Association at Penn — an “umbrella sustainability community” incorporating twelve undergraduate activism groups — doubled down on its demand for Penn to reach carbon neutrality in its endowment by 2025. 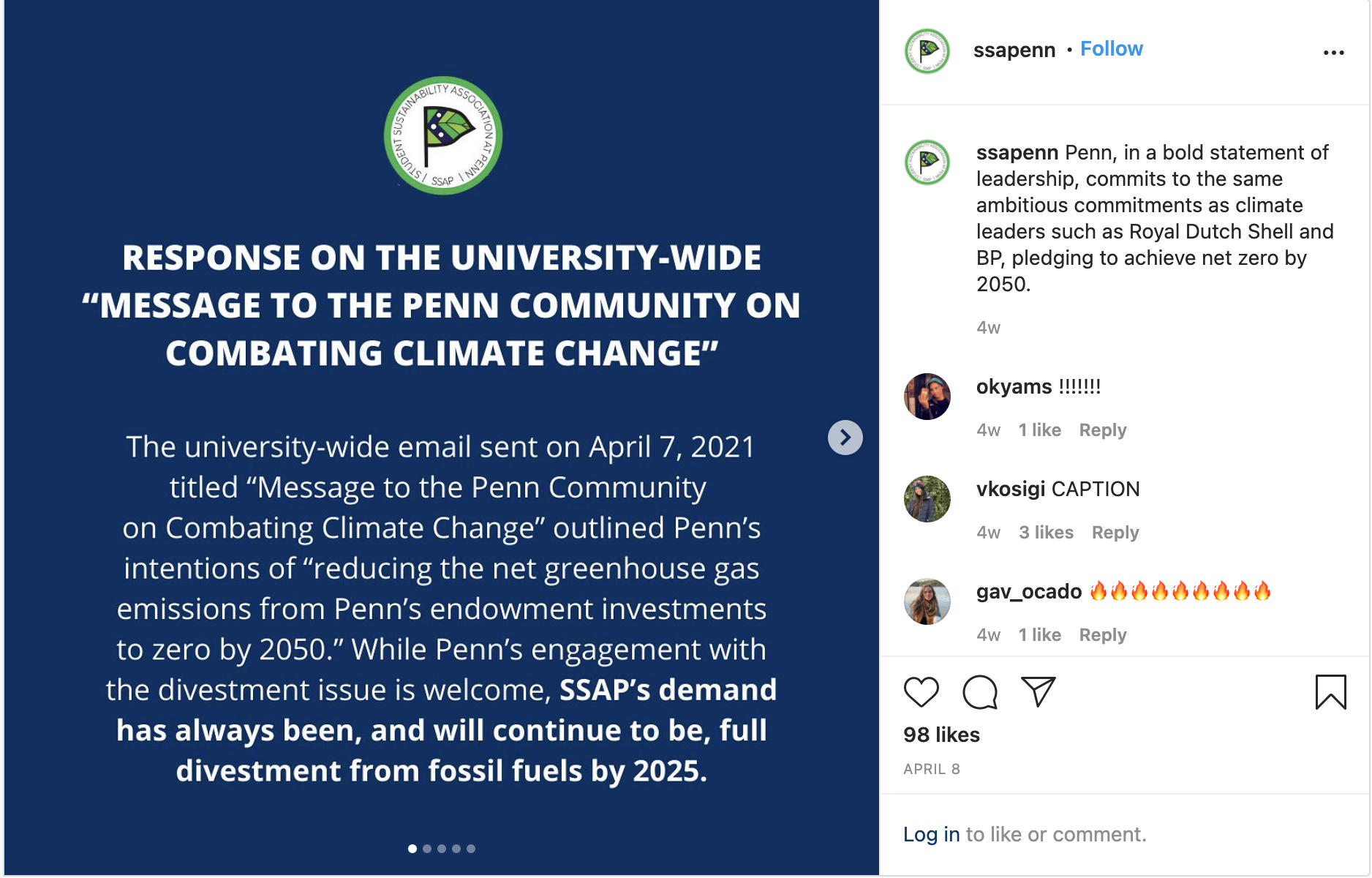 “A commitment to net zero by 2050 is a commitment to the status quo,” the students declared on Instagram, "In fact, Penn’s failure to even mention the word ‘divestment’ highlights how woefully inadequate this plan is in meeting the urgency of the climate crisis.

“Net zero is NOT divestment."

[RELATED: Penn requires all sophomores to shell out for expensive dining plan – whether they need it or not]

The students promised to “host events furthering [sic] demonstrating divestment’s role in the constructive climate solutions conversation" and blamed the university for “greenwashing” under the guise of “a bold act of leadership.”

Campus Reform reached out to the Student Sustainability Association and the University of Pennsylvania for comment; this article will be updated accordingly.