University decides to segregate educators based on race during teaching conference...then changes its mind

Michigan State University will be hosting its Spring Conference on Teaching, Learning and Student Success on May 4-7.

The university has since deleted that portion of the event description.

A university deleted an advertisement for race-based affinity groups after that portion of the event was deemed “discriminatory."

In an earlier version of the event page, Michigan State University listed several features that were new to this year’s annual Spring Conference on Teaching, Learning, and Student Success.

[RELATED: Author of debunked 1619 Project to join UNC as 'Knight Chair in Race and Investigative Journalism'] 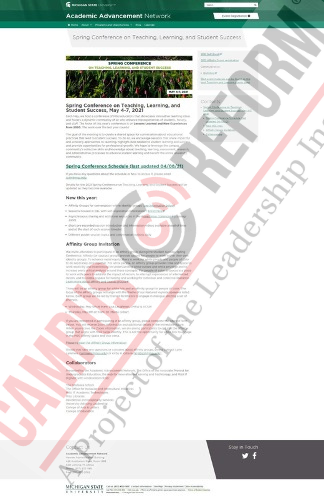 “Affinity (or caucus) groups provide spaces for people to work within their own identity groups. To advance racial equity, there is work for white people and people of color to do separately and together.”

The webpage also provided a link for people to understand and learn more about affinity groups. The page went on to describe what the affinity group will look like for each race.

“For white people, an affinity group provides time and space to work explicitly and intentionally on understanding white culture and white privilege and to increase one’s critical analysis around these concepts. For people of color, a caucus is a place to work with peers to address the impact of racism, to interrupt experiences of internalized racism, and to create a space for healing and working for individual and collective liberation."

[RELATED: Federal court of appeals sides with Christian student group in a case against the University of Iowa]

The university asked participants “to opt into the affinity group that aligns with their racial identity,” reminding them that “this is not the opportunity for white folx to engage in the POC affinity space and vice versa.”

However, the current version of the event page does not include this information on affinity groups anymore.

MSU Deputy Spokesperson Dan Olsen said they “regret the impact the invitation had on some.”

[RELATED: U of Rhode Island denounces prof who won't subscribe to transgender ideology]

“This optional activity established for the Academic Advancement Network’s Spring Conference was not intended to be discriminatory,” Olsen told Campus Reform.

“We are examining and updating the format of the two optional facilitated discussions to be more inclusive. All conference participants are welcome to attend either discussion and we are no longer inviting individuals to join based on identity. Additional information will be shared with attendees soon,” Olsen said. “Our institution values diversity and inclusiveness and continues to steadfastly work to create a more welcoming campus for all.”

The event is hosted every May for MSU educators. According to the university, “the goal of the meeting is to create a shared space for conversation about educational practices that lead to student success.”

“We hope to leverage the campus community’s collective skills and knowledge about teaching, learning, assessment, research, and administrative processes to advance student learning and benefit the entire university community.”

Fourth-year MSU student and Campus Reform Correspondent Sergei Kelley told Campus Reform that the use of affinity groups during this year’s conference is a step in the wrong direction.

“It's another sign of the university getting more left-leaning. I don't think this would have happened 10 years ago, or even 20 years ago,” Kelley said. “I think it's definitely a very scary echo of times past.”

Kelley said he doesn’t see how this could create unity, especially during times where there is a lot of racial tension.

“If there are problems between different groups of people and you don't have them both working together, but rather, you just have them each have their own corner...it seems like it would just make the problem worse,” Kelley said.

As a student, Kelley is scared to see how the use of affinity groups during this conference could potentially influence the way in which professors teach at his school going forward.