Despite the instructor tweeting that there is 'only 1 legitimate side' to the conflict, the school says she will teach the course fairly.

The instructor has protected her tweets, which have caused controversy in North Carolina.

Trending
1
Stanford band mocks Christians during halftime show
By Thomas Stevenson '23
2
Harvard Law instructor: 'It is our civic duty to accost' the '6 justices who overturned…
By Blake Boudreaux  '25
3
UChicago announces 'The Problem with Whiteness' course
By Caroline Cason  '22
4
Steven Crowder delivers fake ‘Fatness as Self-Care in the Era of Trump’ paper in drag a…
By Katelynn Richardson  '22
5
Will Witt responds to students' accusations that he is a 'fascist'
By Kate Anderson
6
College drops disciplinary charges against conservative student
By Toni Airaksinen
Corey Walker '22 | Michigan Campus Correspondent
Tuesday, August 17, 2021 8:30 PM

The chancellor at University of North Carolina at Chapel told concerned citizens recently that a vocal anti-Israel activist teaching a course on the Israeli-Palestinian conflict this fall will be a "welcoming and inclusive environment that fosters civil discourse."

"I am confident that students enrolled this fall in HIST 277 will benefit from a thoughtful presentation of information relevant to the Israeli/Palestinian conflict," Chancellor Kevin M. Guskiewicz wrote in an August 6 letter to the nonprofit Voice for Israel at North Carolina.

Kylie Broderick, the instructor, has used Twitter to promote her BDS platform, which includes calls to investigate any UNC investment into Israel, The Algemeiner reports.

The news outlet also reports that Broderick characterized the United States as a "death cult" in a May 17 tweet.

“Palestinians are murdered for just being alive & bc [because] they’re inconvenient to Israel & its patron, the imperialist US death cult," The Algemeiner also quoted Broderick as saying.

Broderick's Twitter history suggests that her activism may inform her teaching approach to HIST 277: The Conflict Over Israel and Palestine this fall.

In 2020, Broderick publicly questioned the efficacy of teaching both sides of the conflict.

“As an anti-imperialist teaching the modern Middle East, I find it difficult to do role-playing games in class," Broderick tweeted. “2 sides” of most subjects we cover are b/t [between] colonizers/imperialists & oppressed native peoples.” 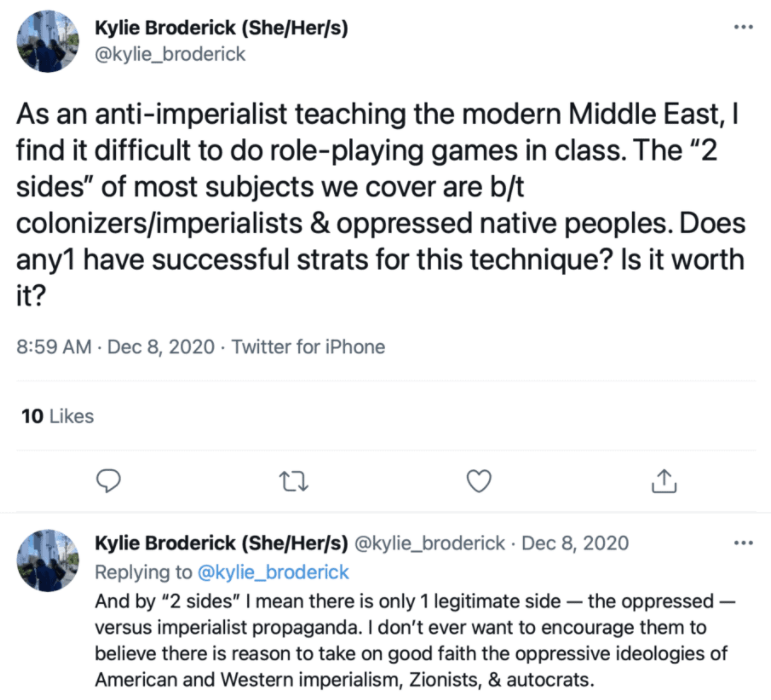 Broderick also characterized the Palestinian argument as the "only 1 legitimate side" while characterizing the US and Israel as vehicles for "imperialist propaganda," as seen in the screenshot published by The Algemeiner.

Likewise, she has also called Israel an "apartheid" state and encouraged boycotts of Israeli goods including Sabra Hummus.

Likewise, Broderick also serves as the managing editor for the online magazine Jadaliyya, which claims Israel is an “established an apartheid regime on the entire territory of historic Palestine”

Tyler Daniel, the president of the Mississippi State University Hillel, told Campus Reform that he disagrees with the content of Broderick’s tweets and her approach to teaching the conflict.

“I completely disagree with the assertion that Israel is an apartheid state. I completely disagree that the entirety of Israel is occupied Palestine.” Daniel said. He also added, “Even if Israel is as guilty of the crimes that she thinks, it’s important to explain their case. She should not dictate to her students who is guilty and not guilty. Students should arrive at their own conclusions.”

These tweets emerged during a summer in which the Israel-Palestine conflict reached a flashpoint and resulted in protests on UNC’s campus. On May 15, 2021 over a thousand demonstrators gathered to protest Israel’s strikes on Hamas. Nadia Yaqub, a professor in UNC’s  Department of Asian and Middle Eastern Studies, and Elyse Crystall, a teaching professor of English, co-organized a faculty statement condemning the Israeli airstrikes against Hamas.

UNC professor Sarah Shields, a previous instructor on an Israel-Palestine course, received numerous negative reviews on the website Rate My Professor for her explicit anti-Israel bias. One reviewer wrote, “Be warned -- she is a strong and vocal critic of Israel. Her sympathies are completely pro-Palestinian, and she doesn't try to hide it.”

In 2019, the Education Department demanded the university change their Middle Eastern studies program after determining it had significant anti-Israel bias.

Campus Reform reached out for comment to UNC and its media relations office replied with the same text as the chancellor's August 6 letter.

Tyler Daniel’s comments are his own opinion and not those of Hillel International. Campus Reform reached out to Voice for Israel at North Carolina, Yaqub, and Crystall for comment; this article will be updated accordingly.