While other schools have canceled mascots over inclusivity concerns, The New School is using its own to promote university values of 'equity, inclusion, and social justice.'

The New School’s mascot, a Narwhal named Gnarls, got a gender-neutral redesign for the Fall 2021 semester, the university reports.

Gnarls backstory includes an “unconventional” upbringing due to “distressing levels of ice loss” that forced the Narwhal’s family out of its Antarctica home.

Get to know our mascot, Gnarls Narwhal (they/them), a social justice advocate and the first and only sea mammal to earn a BA/BFA dual degree from The New School! They can't wait to see you on campus this fall: https://t.co/ZWt6o2IoCB pic.twitter.com/XRa7iAR1rc

Previously, the school's mascot was a narwhal in a basketball jersey. 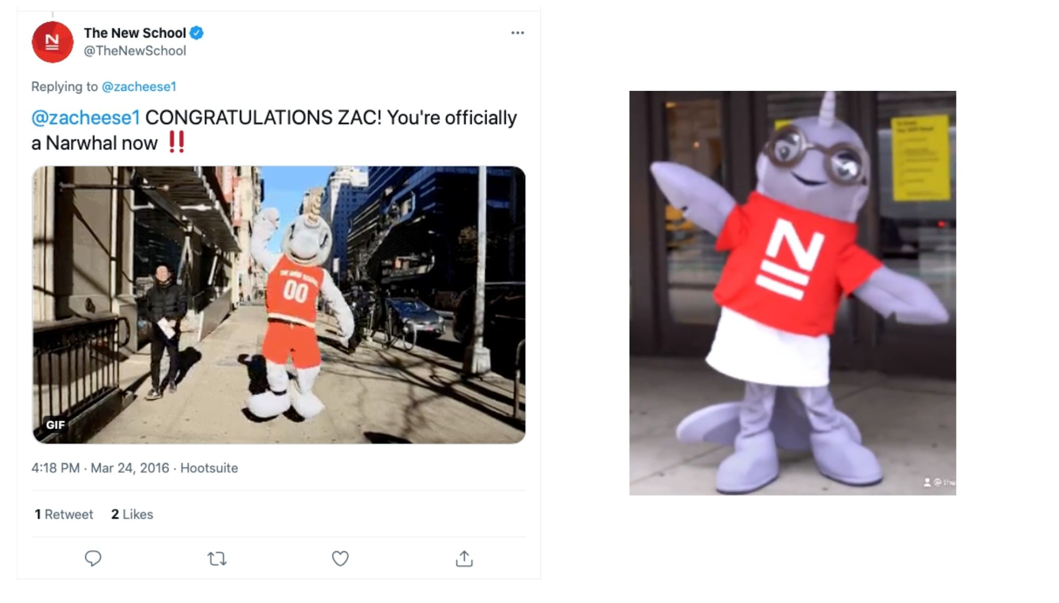 Gnarls then enrolled in The New School after encountering students from a real course called Vogue’ology.

The class focuses on the “African American and Latino lesbian, gay, bisexual and transgender Ballroom scene” and is based on “popular cultural representations of gender, class and race that has informed contemporary notions of gender performativity while also being used to affirm normative notions of femininity, wealth and whiteness.”

Graduating with a BA/BFA dual degree in Communications and Environmental studies would later “bolster Gnarls in [the programs'] environmental justice initiatives and make their signs all the rage at climate change protests.”

The university boasts that the Gnarls is gender-neutral, however, the mascot contains a tusk, which is a predominately male feature in narwhal's, according to the BBC.

The university’s Equity, Inclusion, and Social Justice office states that it is dedicated to using “pedagogy, policies, and practices that institutionalize the values of equity, inclusion, and social justice.”

While the New School has embraced its mascot as a hero of social justice, Campus Reform has reported on numerous other schools — like Marietta College, Valparaiso University, Texas A&M-Corpus Christi, and The University of Nevada-Las Vegas — that have removed mascots due to concerns over “inclusivity” or problematic history.

Campus Reform reached out to The New School for comment but did not hear back in time for publication.