Barnard College told Jewish students to use technology on Rosh Hashanah, stating that the school 'cannot wait' for the Holy Day to conclude.

Cynthia Yang, the head of Barnard’s pandemic response team, sent the directive just hours before the start of Rosh Hashanah.

Barnard College told its observant Jewish students that they would have to violate their religious beliefs and use a mobile application on Shabbat and during the High Holidays for COVID-19 monitoring.

Observant Jews are prohibited from using technology on the Sabbath and High Holy Days, which includes Rosh Hashanah and Yom Kippur. The latter starts tonight.

Cynthia Yang, the head of Barnard’s Pandemic Response Team, sent an email to students who identified themselves as a "Sabbath-observer" to Barnard Residential Life and Housing Department.

The email came in just hours before the start of Rosh Hashanah, the Jewish new year, on Monday.

“We recognize that how you have practiced religious traditions in the past may not align with the use of technology during the high holy days or the Sabbath, but this year it is paramount for the community’s health and safety (as well as your own) that you abide by the Barnard pledge and follow the College’s policies and procedures,” Yang wrote. 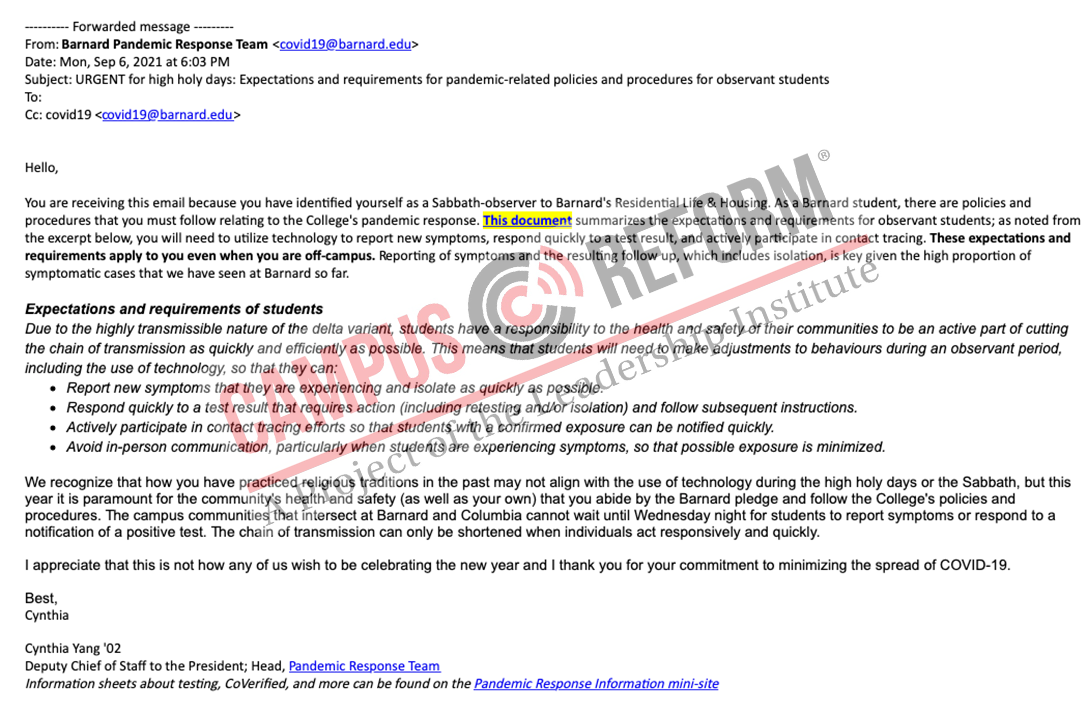 The Federalist first reported on the incident.

The email claimed that Barnard simply could not wait a day, after Rosh Hashana ended, for students to report symptoms.

Yang wrote, “The campus communities that intersect at Barnard and Columbia cannot wait until Wednesday night for students to report symptoms or respond to a notification of a positive test.”

“The chain of transmission can only be shortened when individuals act responsively and quickly," she added.

But after a mere 90 minutes, Yang circled back writing that her first email was “written in haste” and offered a new COVID-19 monitoring system that did not involve the use of technology.

"I write to apologize for the last email you received from me. It was written in haste with the goal to keep everyone as safe as possible during the high holy days and it, regrettably, was not considerate in the way it should have been of each students’ ability to practice and observe their religion how they choose," Yang said in the email obtained by Campus Reform. 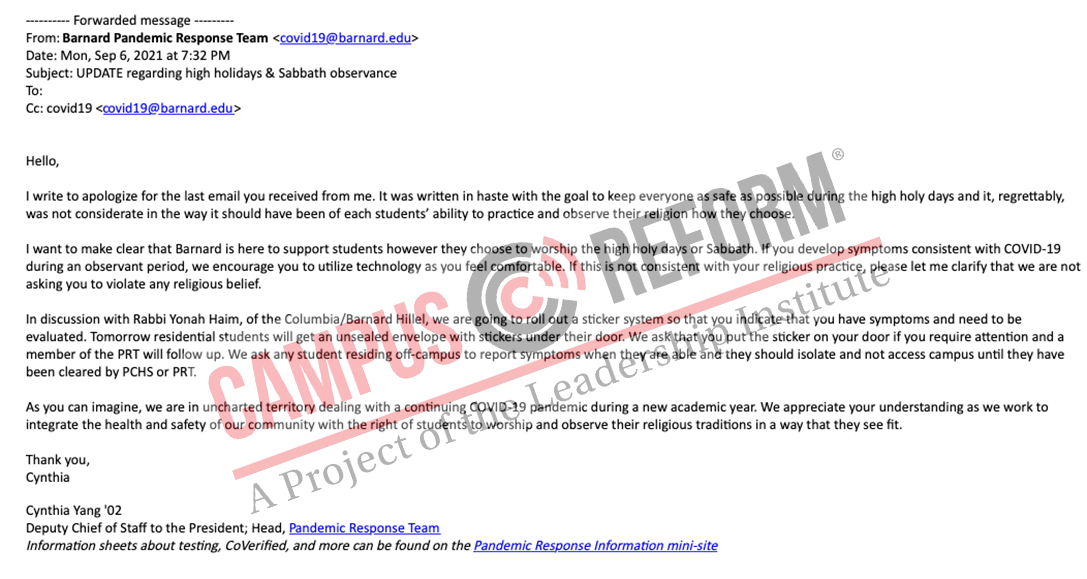 The Students Supporting Israel (SSI) chapter at Columbia University‬ provided Campus Reform with a picture of a letter sent to students who received the email, apologizing again for disregarding religious beliefs.

A representative from Columbia's SSI chapter‬ told Campus Reform that they are happy the university apologized, but noted it came only after complaints were made.

"Although we appreciate the apology, this came only after several complaints were made and after Jews were specifically singled out," the representative said.

The representative continued, "There is no excuse for antisemitism and there is no excuse to force students to violate religious beliefs in their own homes. Jews understand the dangers of the pandemic and, unfortunately, this email used it as a justification to target Jewish students. There needs to be serious improvements when it comes to caring for, considering, and respecting our community."

“I think it’s pretty crazy because Barnard talks a lot about diversity but it’s super interesting that they don’t really respect [observant Jewish students] not being able to use technology,” Nieder said.

A spokesperson at Barnard University provided Campus Reform with the following statement:

"Barnard College deeply respects the religious traditions of our diverse community. We have and will continue to make every effort to minimize exposure to, and the spread of, COVID-19. Upon learning that a member of our community had tested positive for the virus, we sent an email suggesting immediate steps to safeguard everyone's health by referring students to our standard health and safety protocols, which require the use of a cell phone. We have since worked closely with Columbia/Barnard Hillel to make alternative arrangements (not involving electronic devices) for any student who cannot use technology based on their religious traditions."