Twelve candidates ran for student government positions under the Communist Party at the University of Florida during the school’s fall 2021 election.

For the first time in school history, the Communist Party at the University of Florida ran for student government using that name during the fall 2021 election.

The party ran 12 students under its banner slated in various races. The party participated in last fall’s election under the name of the Progressive Party and announced in March its plans to “reinvent” itself. declaring its "Socialist Party" name would become "Communist Party" for the Fall 2021 Election. 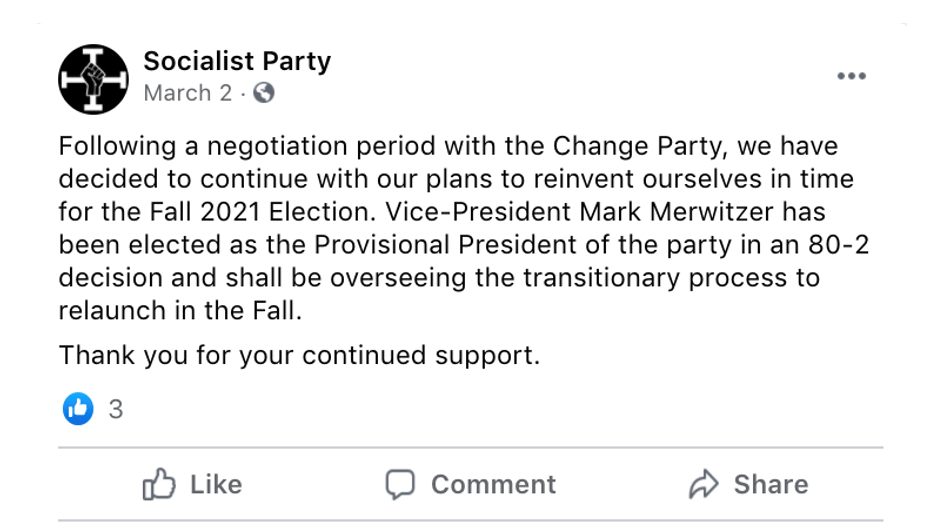 In an August 31 Facebook post, the group explained that they wanted to register for this year's fall elections as the Socialist Party, but were unable to do so, opting instead for the Communist Party name. 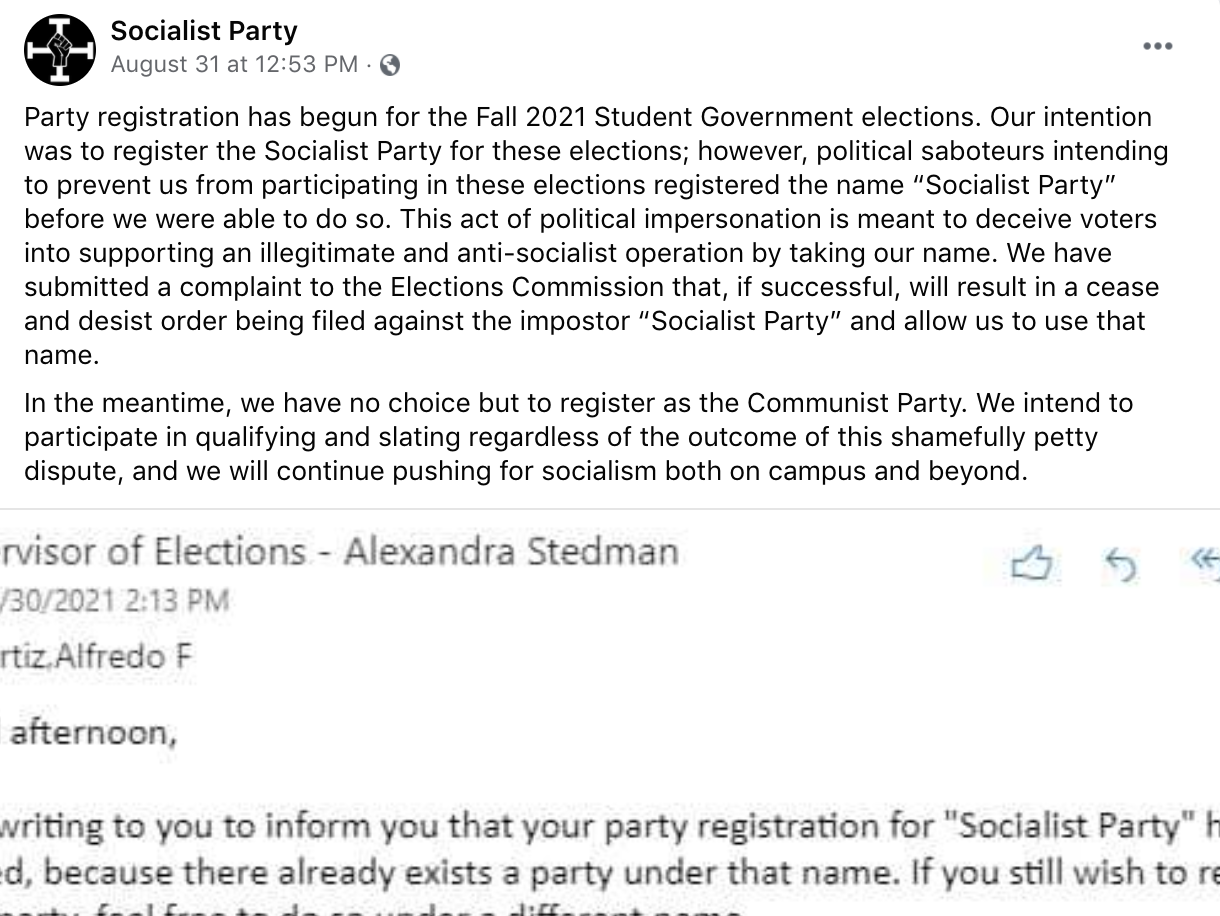 The party claims in the post that “political saboteurs intending to prevent us from participating in these elections registered the name ‘Socialist Party’ before we were able to do so.”

“This act of political impersonation is meant to deceive voters into supporting an illegitimate and anti-socialist operation by taking our name. We have submitted a complaint to the Elections Commission that, if successful, will result in a cease and desist order being filed against the impostor ‘Socialist Party’ and allow us to use that name.”

The post went on to say that “in the meantime, we have no choice but to register as the Communist Party. We intend to participate in qualifying and slating regardless of the outcome of this shamefully petty dispute, and we will continue pushing for socialism both on campus and beyond.”

A Facebook post the next day stated that the party had “compiled evidence that proves the Change Party was responsible for registering the name 'Socialist Party' in an attempt to politically impersonate our party and prevent us from participating in the election.

The statement continued, "We have amended our complaint to the Elections Commission to reflect this new development, and we have requested for a cease and desist order to be filed against the Change Party until our case is heard.”

Also in early September, the Communist Party posted its platform on Facebook.

The platform outlined the party's plan to: host “seminars on Critical Race Theory with Students Taking Action Against Racism and other community organizations,” “Defund the University Police Department and demand student control of campus police funds,” “Use emergency reserves to provide a universal stipend to students during the pandemic,” and “Establish a Senate committee that will protect leftist and LGBTQ+ students from further discrimination by the state government.” 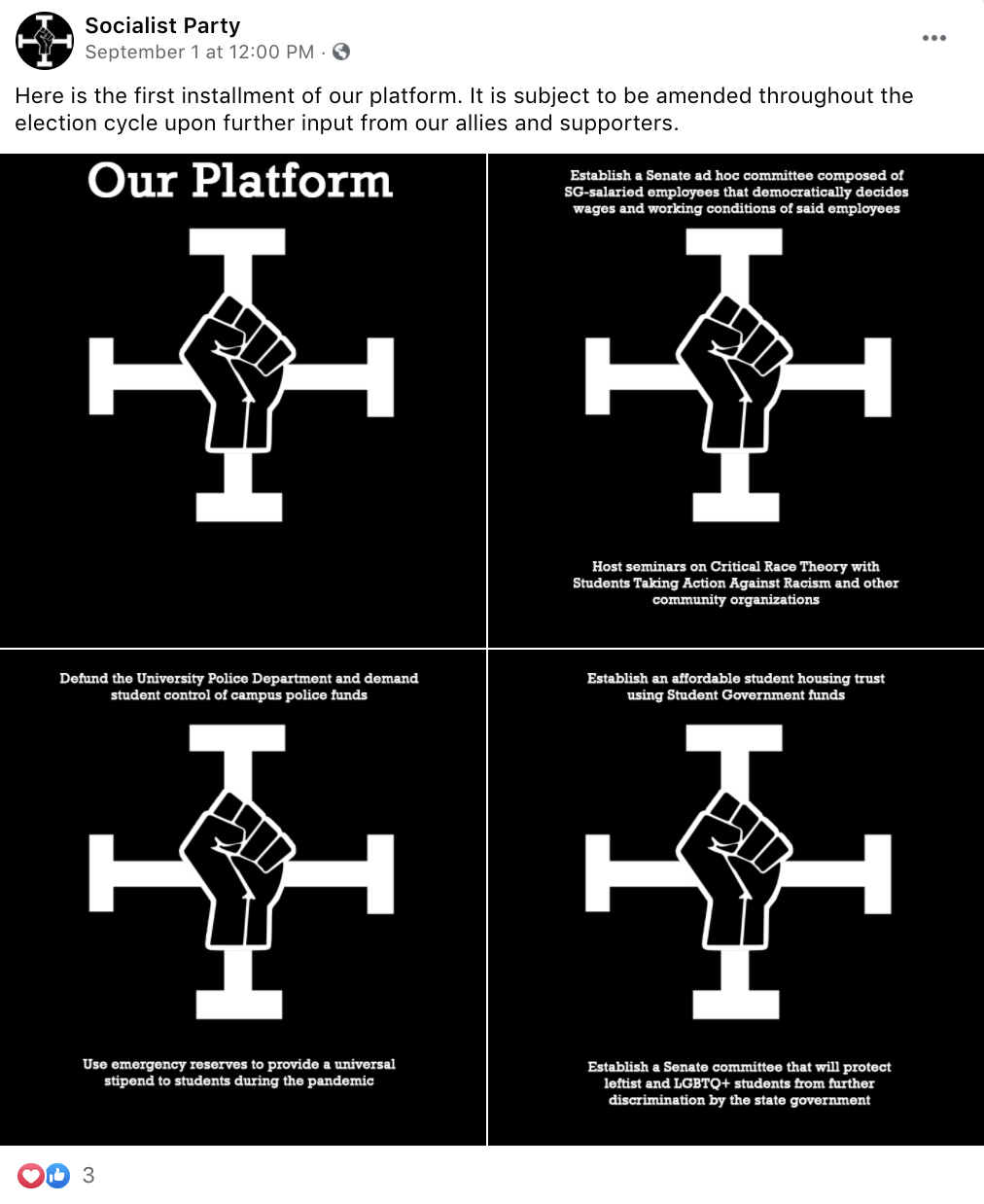 A September 20 post advocates the abolition of “the two-party system by enacting mixed-member proportional representation and ranked choice voting.” Similarly, the called for “a university labor army by paying students and faculty who volunteer to grow sustainably-sourced food that will be freely available to students.” 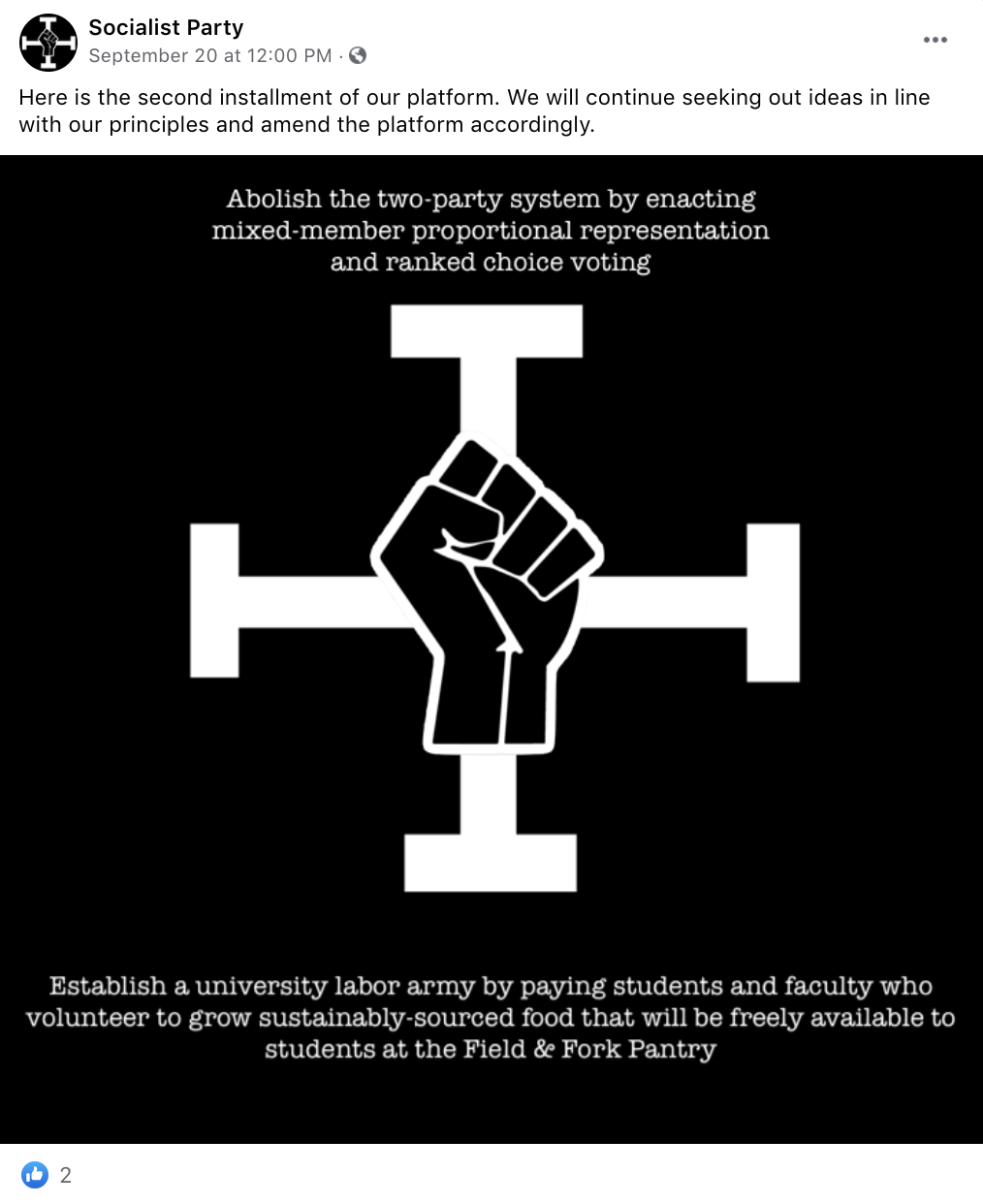 Ortiz also expanded on his party’s platform that claims leftists are being discriminated against by the Florida state government.

“We can see how there have been numerous measures introduced by the state's government, such as a ban on critical race theory, having to report your political beliefs to the state, which is a continuation of surveillance against leftist community,” Ortiz said. “Those would be examples of discrimination, especially if school funding is going to be based on the number of leftists present or not, in any public institution.”

Campus Reform then asked Ortiz if he believed conservatives were being discriminated against on college campuses, to which he replied by recognizing that “there is a liberal bias in public institutions, especially higher education.”

However, Ortiz said “the Communist Party does not benefit from that liberal bias.”

Ortiz, who was born and raised in Puerto Rico, said he supports communism because “it provides for the working class to be in democratic control over the means of production, those being land, labor and capital.”

He continued by saying that “the nature of socialism and communism provides for less alienation than under capitalism, as far as what you work and how you plan your day around your employment.”

When asked why the party wanted to change its name from the “Progressive Party” to the “Socialist Party,” Ortiz said they wanted to “push the narrative within student governments a little farther to the left and make people a little more accepting of the name and of the Communist label.”

“Once they read our ideas...if they agreed with our platform, they would associate those platform proposals with communism, and therefore start becoming more open to self describing as communists,” he said.

Ortiz recognized that there is a negative connotation surrounding communism, especially in the United States. However, Ortiz said he sees this perception as an opportunity to “reinvent” communism.

“I believe that going forward into the future of political discourse surrounding socialism and communism, we will be able to reinvent communism and socialism into something better than what it has been in the past,” Ortiz said, adding that he would like to see “some form” of communism implemented in America.

Campus Reform also asked Ortiz is the UF Communist Party was receiving any funding or support from an actual communist party or communist organization outside of the University of Florida. To that, Ortiz said: “I don't think that I'm at liberty to disclose that information, as of this moment. But if we keep in touch, I would be more than happy to talk to you more about party finances.”

Ortiz said the UF Communist Party will be looking into participating in the next student government election.

The other two parties running in the election were Gator Party and Change Party, the latter being the group the Communist Party accused of pre-emptively registering the Socialist Party name.