Web design students at the University of Central Florida were given a webpage feature Bernie Sanders and pro-socialism rhetoric as an example for a class exercise.

Campus Reform obtained a screenshot of the webpage and video tutorials from the class.

Rachel Winter teaches “Front-End Web Design” at the University of Central Florida, a class which uses a pro-socialism Bernie Sanders webpage as a class example for an assignment.

Campus Reform spoke with a student at UCF who wished to remain anonymous and obtained a screenshot of the example of the page in question, which was used to show students how to add CSS to an HTML webpage they had already designed.

The webpage, "The Social(ism) Hour," which Winter, a PhD candidate at the university, features a raised fist, a definition of socialism, and a description of the political philosophy of Senator Bernie Sanders (I-VT). 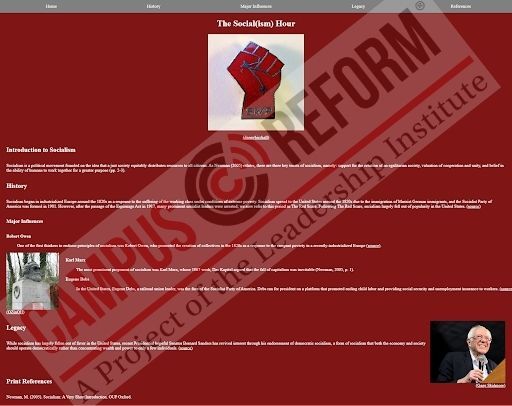 “Socialism is a political movement founded on the idea that a just society equitably distributes resources to all citizens,” the webpage reads.

The page also explains the beliefs held by socialists.

“There are three key tenets of socialism, namely: support for the creation of an egalitarian society, valuation of cooperation and unity, and belief in the ability of humans to work together for a greater purpose.”

The student told Campus Reform, "I'm not a very political person but this is pretty uncomfortable, especially in a web design course."

After summarizing the work of Robert Owen, Karl Marx, and Eugene Debs, the passage then states, “while socialism has largely fallen out of interest in the United States, recent Presidential hopeful Senator Bernard Sanders has revived interest through his endorsement of democratic socialism, a form of socialism that both the economy and society should operate democratically rather than concentrating wealth and power to only a few individuals.”

Winter detailed the coding of the page in two separate YouTube videos. Those online tutorials can be viewed here and here.

Campus Reform also spoke with the student about indoctrination on campus.

"I believe these professors prey on the eager minds of young students like myself," the student said. "They know what they’re doing."

Recent legislation signed by Gov. Ron DeSantis (R-FL), however, seeks to improve civics education by “shielding students, staff, and faculty from certain speech” and permitting students to record or publish their instructors’ lectures.

Several Floridians affected by socialism and communism were present at the bill signing.

For instance, Andrew Bremberg, president of the Victims of Communism Memorial, noted that only 63% of Gen Z and Millennials believe the Declaration of Independence better “guarantees freedom and equality” over the Communist Manifesto.

Campus Reform reached out to Winter and the University of Central Florida for comment; this article will be updated accordingly.