Jaden Heard, an AU student received racially insensitive messages and threats from his peers due to his anti-mandate views.

Students from multiple universities sent Heard comments and direct messages on his Instagram page in disapproval of his position on the school’s vaccine mandate.

A student activist speaking out against Auburn University’s vaccine mandate received multiple racist messages after a photo of him holding a controversial protest sign circulated online.

Jaden Heard, a Black sophomore at Auburn University (AU) and a Turning Point USA (TPUSA) member at the school, has been vocal about his disapproval of the school’s vaccine mandate, which is required for all staff members.

To fight against the mandate, Heard, along with other members of the Auburn community, attended an organized protest to spread their anti-mandate message.

Heard told Campus Reform that over one hundred people were present at the protest, which was covered by the Right Side Broadcasting Network (RSBN). 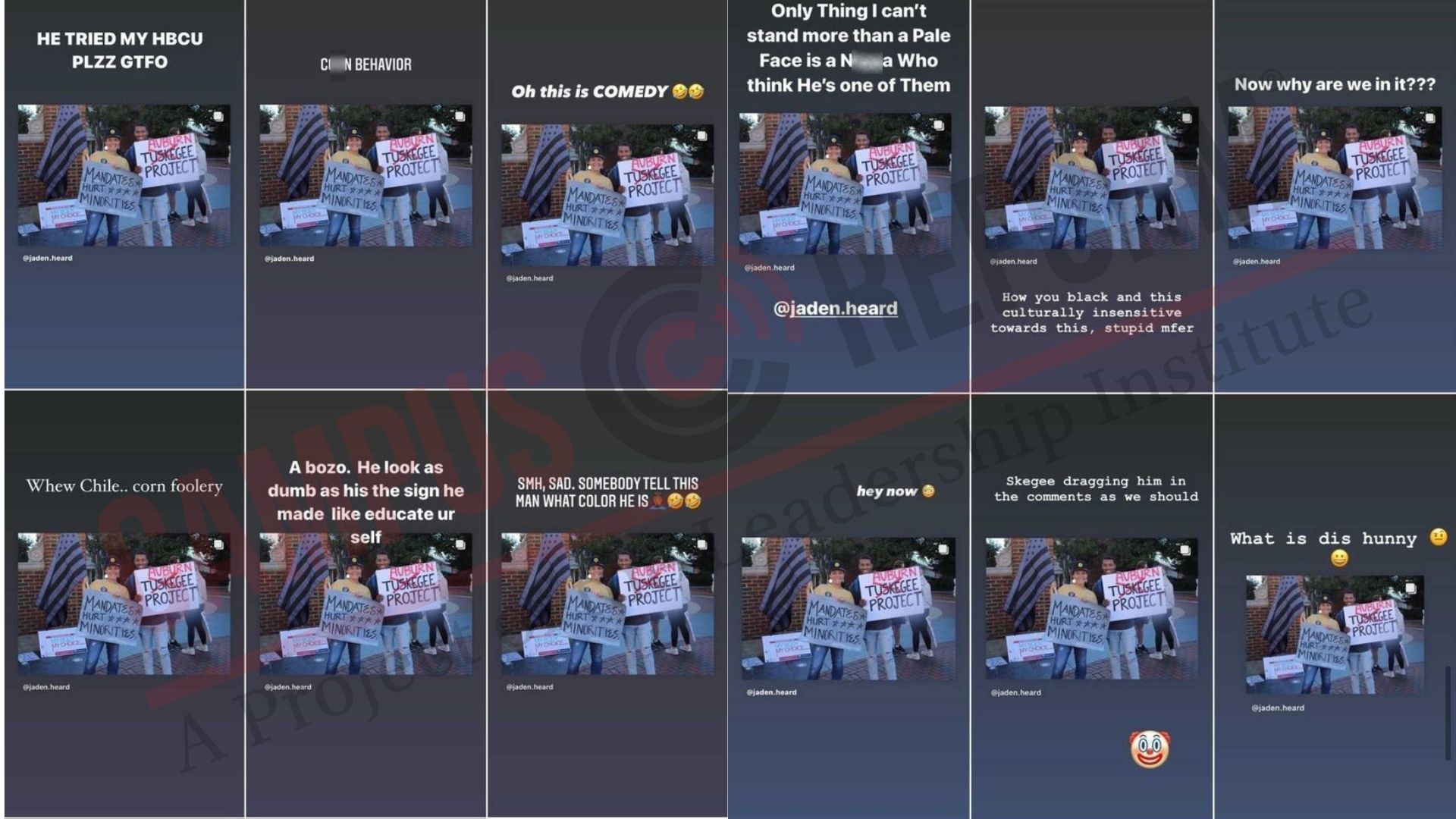 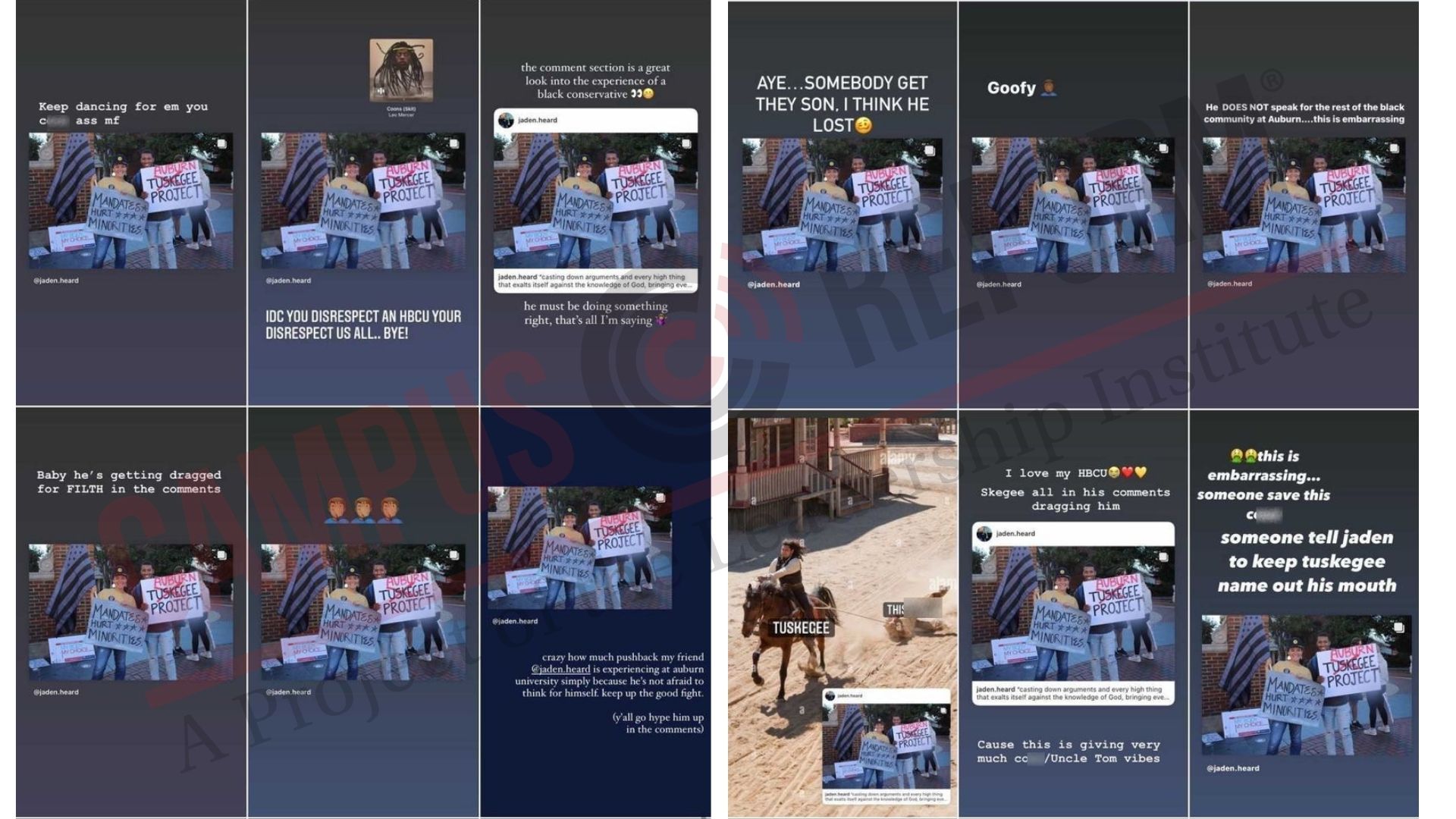 At the protest, Heard held a sign comparing the school’s mandate to the Tuskegee Experiment, a comparison that sparked backlash from students at Auburn University, as well as at Tuskegee University.

“Basically, AU ended up setting a vaccine mandate on all faculty and staff part time and full time. A lot of us from the TPUSA chapter decided to have a protest on our campus and a bunch of faculty and parents [showed] up as well. I decided to bring a sign and even explained my reasoning for using the sign on RSBN to use at the protest. I decided to post the protest and my sign on my Instagram. Students from Tuskegee University are now personally attacking me, threatening me, calling me racial slurs, and here we are,” Heard explained to Campus Reform.

Heard posted his RSBN interview to his personal Instagram page. With this, came backlash from students from his school and beyond.

Campus Reform obtained screenshots of comments and direct messages sent to Heard, some including racial slurs and racist comments in response to him having an opinion that goes against progessive approved narrative.

Multiple individuals called Heard a “c**n.” One posted Heard’s interview on Instagram story, writing “this is embarrassing...someone save this c**n.”

Another user commented on Heard’s Instagram post saying “I hate how brainwashed you are, but remember you still a NEGRO.”

Campus Reform reached out to Sims to get her perspective about Heard and the protest as a whole.

“Honestly, as a black Auburn alumna, it was disheartening to see. Auburn isn’t necessarily the most inclusive arena for black students or students of color so for many, relations with nearby schools like Tuskegee is an important factor of just surviving at Auburn on a day to day basis,” Sims told Campus Reform.

She added, “For him to disrespect that and try to disguise a very serious and controversial experiment that still affects our neighbors to this day, in the attempt to make a literally mute [sic] point, it bothered me deeply.”

After being asked about her comment on Heard’s post and whether or not the comment itself was inclusive, Sims told Campus Reform “You can’t be non-inclusive where you were never included. Black students weren’t originally included in Auburn’s dynamic of equality. Therefore, us creating our own communities were a direct result of being intentionally left [out of the] overall one.”

Some students at Auburn University are standing up for Heard. Campus Reform interviewed two students who  agree that Heard should not have received the treatment he did.

Ava Marano is currently a student at Auburn University, as well as the organizer of the protest that was held in opposition to the school’s vaccine mandate. She is in full support of Heard and his fight against the mandate.

“Jaden is an ardent conservative on campus. He is devoted to his convictions and defends his beliefs with courage and confidence,” Marano told Campus Reform.

“Since the introduction of the forced staff vaccine mandate on Auburn University’s campus, Jaden has firmly stood against its premise and intended to support Auburn staff and student workers against forced coercion," said Marano. "Jaden displayed perhaps the most bold poster at the No Forced Vax for Staff protest taking a robust stance on the mandate relating it to the Tuskegee Project, where African Americans were refused medical treatment for syphilis they unknowingly had.”

“The appalling direct messages Jaden is receiving shows the complete intolerance of the left. The same party that contends for love and unity is the same party bashing a person for his personal beliefs and convictions," said Marano. "The same people that ardently contest racism are the same people using racist slurs. It seems that racism can only be defined by those on the left. They hate racism so much, but employ it when people defy their sentiments.”

“America has become radically intolerant to conservative beliefs and the ramifications are evident even at Auburn University, one of the few largely conservative campuses left in the country," Marano added.

Harrison MacDonald is another Auburn University student willing to speak out against the hate being displayed towards Heard. MacDonald also serves as the President of TPUSA at AU.

“Jaden’s firmly committed to the conservative agenda and movement in general. In regards to the mandate, his goal is to call attention to the unconstitutionality of the mandate,” MacDonald told Campus Reform.

“As far as the messages sent to him, it saddens me to say that it doesn’t surprise me. The 'tolerant' left does this all the time to those that they disagree with, especially black conservatives," MacDonald added.

“I would like to see a statement from the University condemning the racist statements.”

Campus Reform reached out to Auburn University and Tuskegee University for comment, but did not receive a response.