Hunger strike, singing: A day of college student protests at the White House

Students flocked to the nation's capital to protest the Biden administration's record on student loans, as well as a new voting rights bill.

A group of students continued their indefinite hunger strike outside the White House.

It was a busy day outside the premises of the White House as college students flocked to the nation’s capital to make their voices heard on a number of issues.

The Biden administration got a loud wakeup call this morning as a marching band accompanying a handful of college students jammed outside on the sidewalk of Pennsylvania Avenue to advocate against continuation of student loan payment.

Five students danced next to a marching band complete with a tuba, trombone, saxophone, and drums, while holding signs calling for President Biden to take action on student loan debt. 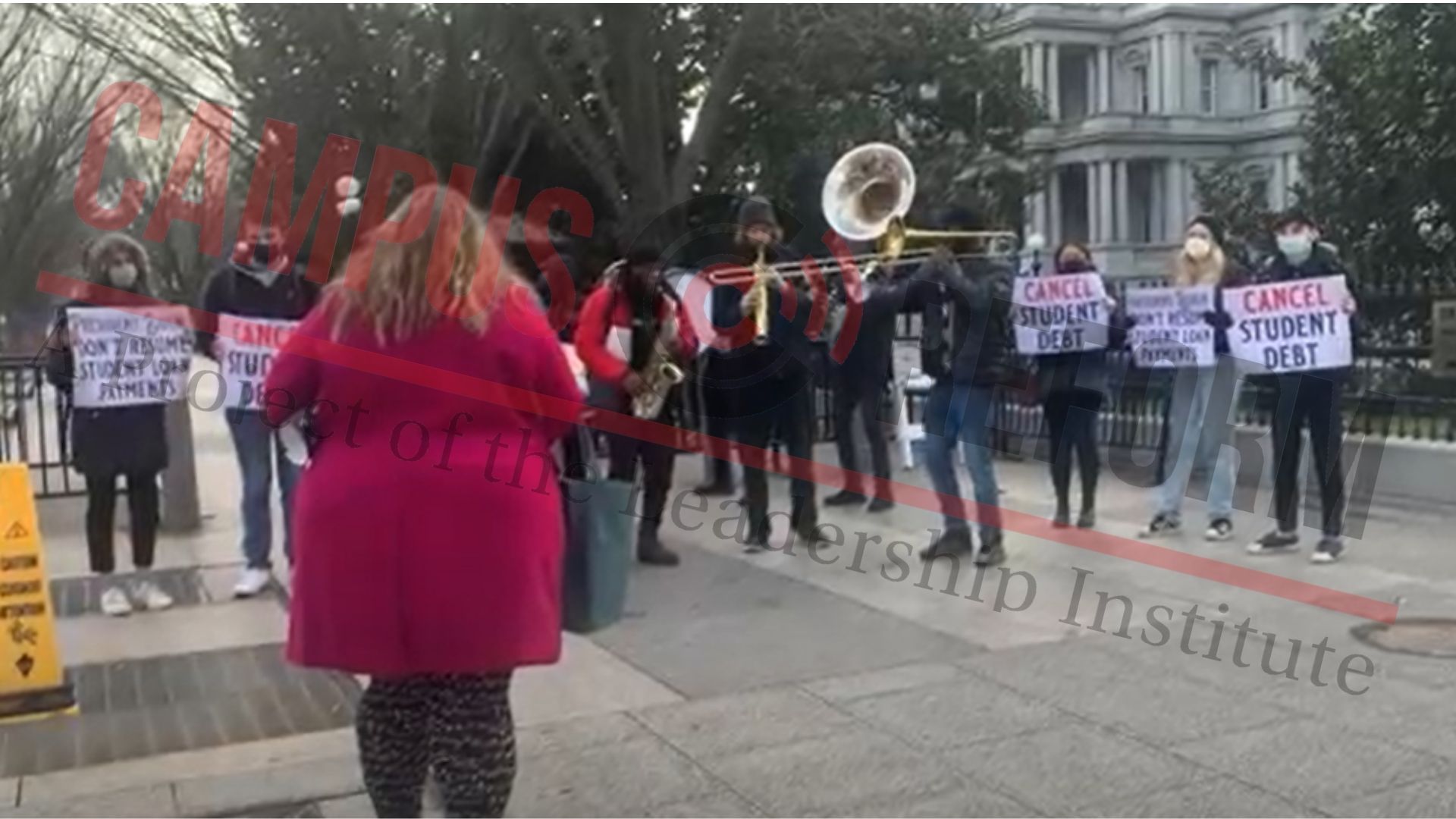 The other three include a clear-cut statement: “Cancel student debt.”

Campus Reform attempted to converse with the students, however was turned away by the event organizer. Although the students were willing, she ordered them not to engage.

A member of the band did tell Campus Reform that the protest was organized by MoveOn, a progressive public policy institute and political action committee.

Campaigns led by the organization include “America for All,” “Solidarity with the Black Lives Matter Movement,” and “Save the Postal Service.”

MoveOn credits their involvement as having an impact on “fighting Trump’s corruption,” “fighting racial injustice,” and the passing of “progressive foreign policy.”

The group also mobilizes progressive candidates to run and defeat “right-wing Republicans.'' Successful candidates they helped ascend to victory include notable members of Congress such as Alexandria Ocasio-Cortez, Ilhan Omar, and Rashida Tlaib.

Another batch of protestors opted for singing, rather than instruments, to catch the attention of the administration.

A group of protesters urging Biden to extend student loan repayments/cancel them outright have brought a small marching band to the White House grounds this morning pic.twitter.com/Ux8Jd8UHyD

The protest follows a recent announcement from the current administration that confirmed student loan payments will resume in February, snubbing promises made on the campaign trail.

Campus Reform has reported on the administration’s approach to student loans, calculating that $11.7 billion of student loan debt has been nationalized to date. 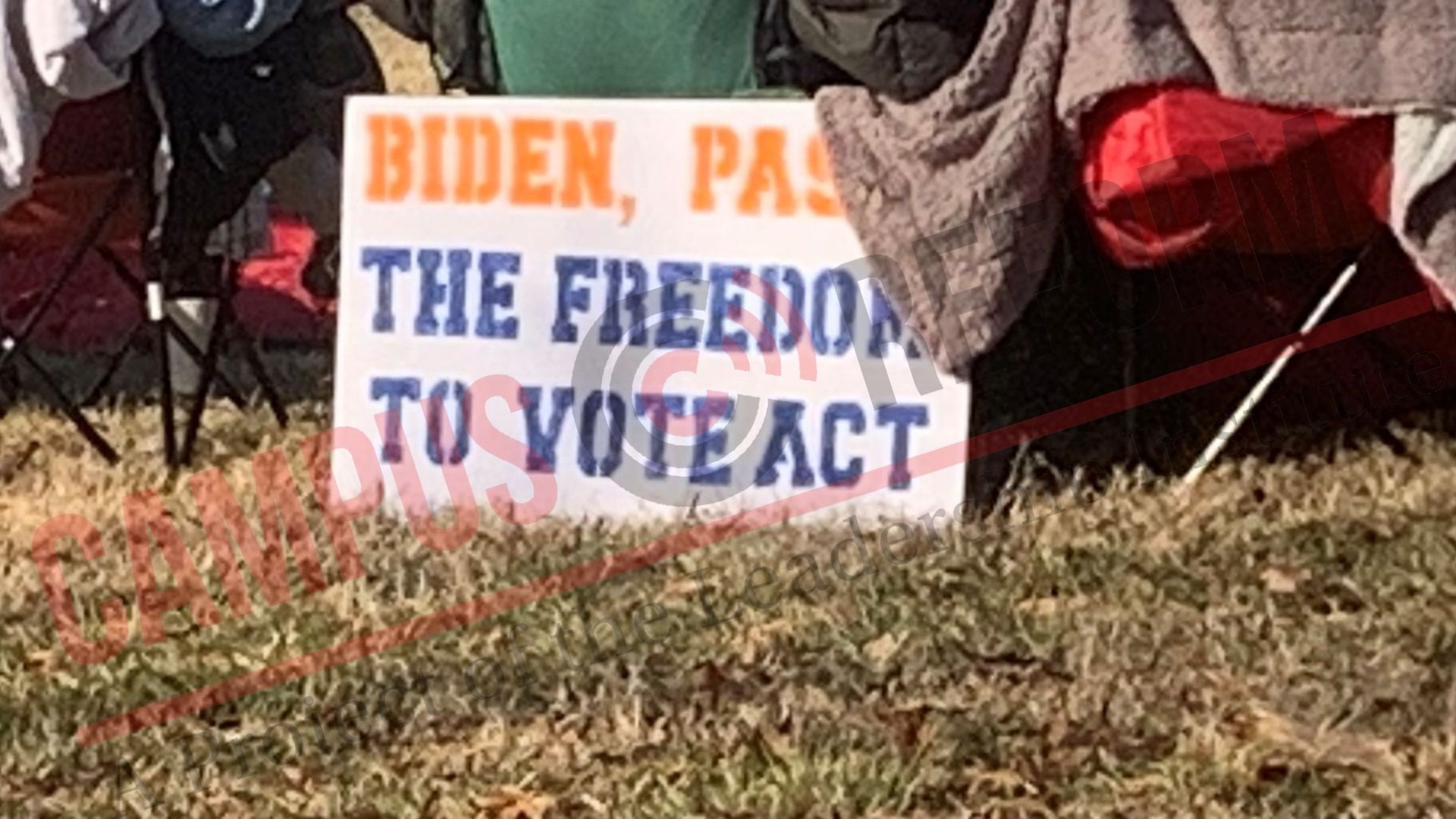 Nearby, gathering at 10:00 am around Lafayette Square, nearly 25 students representing the political organization “Un-PAC” commenced day10 of their indefinite hunger strike.

The students, representing colleges and universities from across the country, are refusing to eat until support is garnered from the Biden White House for the Freedom to Vote Act.

The act introduces changes to the voting process, and was sponsored by Minnesota Senator Amy Klobuchar on September 14. The text of the bill addresses “voter registration,” “voting access,” “election integrity,” and security, redistricting, and campaign finance.

Provisions in the bill include expanding automatic and same-day voter registration, increasing mail-in and early voting, limiting removing voters from voter rolls, and establishing Election Day as a federal holiday.

Additionally, the bill would restore the right to vote to those who have committed a “criminal offense” with the exception of those serving a felony sentence at the time of the election.

Other changes introduced in the bill include defining criteria for redistricting, strengthening audit processes, and restricting campaign finances.

The protest originally gained its spark in Arizona, where students from the University of Arizona and Arizona State University camped out in front of the state capitol, refusing to eat, until action was taken.

Their efforts were noticed by Senator Kyrsten Sinema, and a meeting was arranged for the two parties to discuss voting rights and pitch their support for the bill.

Sinema has been a figurehead of media attention as students from Arizona State University have vocalized their disapproval of her recent hesitations to support on party lines.

Campus Reform reported on an incident in October where left-wing activists stalked the Senator into a campus restroom to express disapproval over her immigration policies.

Now, the students have traveled from Arizona to Washington D.C to take their protest to the next level, surpassing their senator to demand action from the highest level of office. They have been joined by students from Texas, Virginia, Florida, and Utah.

1 week ago, 20 brave young people began a #HungerStrike4Democracy in AZ. Now, we're continuing outside the White House (cc @POTUS!) & our movement is growing! As young people from TX, FL, MT, UT & VA join us, we are moving news about the strike to @LetsUnPAC. Follow us there!! pic.twitter.com/ygaxJJ6ak9

The Freedom to Vote Act, however, is currently at a standstill, and remains in the senate chambers after a motion to proceed was rejected Oct. 20 by a 51-49 vote.

Campus Reform spoke with an organizer of the hunger strike about why the students felt compelled to take drastic action.

Shana Gallagher, Executive Director of Un-PAC, told Campus Reform that the goal of the strike is to pass the Freedom to Vote Act before the end of the year.

“I think that all young Americans can agree that our government isn’t working very well for our generation,” Gallagher said.

“Our politics are overwhelmed by big, dark money and corporate influence and slogans like ‘Drain the Swamp’ really resonate with me for that reason, because there is a lot of political corruption and we need to root it out of politics,” she continued.

[RELATED: POLL: 37% of Democrats in college refuse to be friends with a GOP voter]

Gallagher expressed that the act is not a partisan issue, but rather one all young Americans can agree on.

“We should have a government that works to represent the will of the people and we should all have the freedom to vote,” she stated.

According to Gallagher, the bill has generated bi-partisan support from an “overwhelming majority of Americans.”

Lauren Dorn, a student at Arizona State University, was a part of the original band of strikers who began their plight in their home state, and has been a persistent presence on the outskirts on the White House lawn.

“I think it’s important to understand that there are a lot of people in America that don’t have equal access to vote,” Dorn told Campus Reform.

“Our democracy, our country, was founded on principles of inclusion and equality and there are wonderful aspects and reforms within this bill that allow so many marginalized communities to be able to access voting a lot easier,” she said.

Dorn is a political science major, and credits her experience on a “large and diverse campus” to giving her a pathway to activism.

“This is a great way for young people to be involved and show their support for not only reforming our democracy, but being passionate about policy and especially policy such as the Freedom to Vote Act.”

Attending a large campus is also what gave Dorn the spark to take a deeper role in supporting the act and realizing a need for “federal intervention” in today’s broken system.”

Campus Reform has reached out to MoveOn for comment. This article will be updated accordingly.