Findings are organized within the categories of assignments, biased language, and common readings/textbooks.

In total, Campus Reform surveyed 201 undergraduate course syllabi across these institutions. This number included 25 100-level introduction to sociology courses, which are sometimes taken by non-majors to fulfill general education requirements. The results of the survey, divided into the categories of assignments, biased language, and common textbooks and readings, are below.

Write an essay demonstrating that human existence is political

Students were asked to write an essay arguing that their own “lived experiences demonstrate how social categories and modern human existence is political.” The assignment instructs students to use “personal anecdotes informed by class theories and concepts” to make their case.

A class activity presented students with a hypothetical scenario: a baby whose parents are “trying to raise them with gender creativity.” Students were asked to put themselves in the mindset of these parents and figure out what raising a genderless baby might look like by shopping for outfits, toys, and nursery decorations online.

In the same class that told students to imagine raising a genderless baby, students were asked to “create instructions” on completing a variety of tasks as a man or a woman, including walking down the street, going to the pool, and playing sports. The purpose, according to the syllabus, was to prove the point that “we all have subtly internalized rules” about how each gender performs. 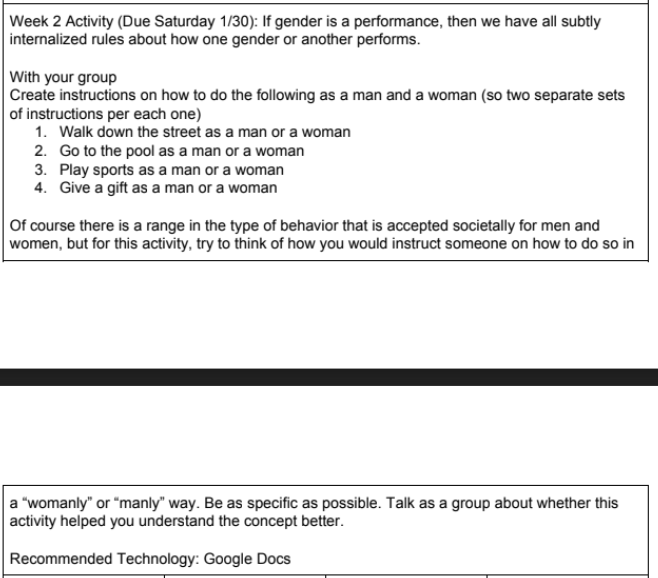 Watch “The Office” to learn how a workplace operates

Covid-19 restrictions complicated or eliminated many typical learning opportunities. In lieu of visiting an actual workplace and writing a paper, one professor allowed students who were uncomfortable going in public or who were required to quarantine to watch a TV show or movie about a workplace—like “The Office, Office Space, Scrubs, Parks and Recreation, [or] Superstore”—and “take detailed notes” as if they were “observing an actual workplace.” 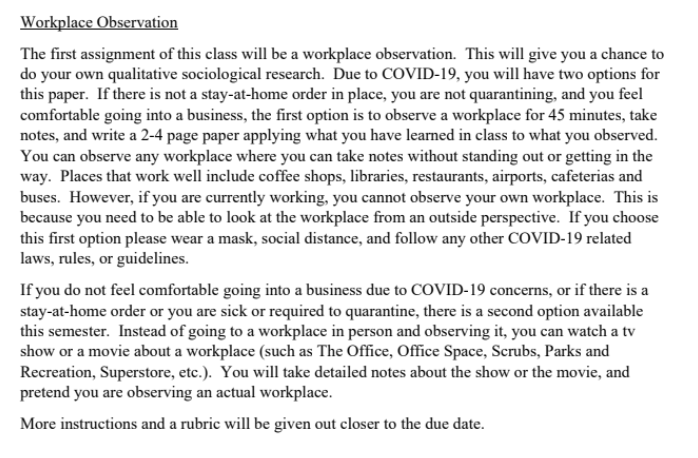 As a final project, students in this class were assigned to work with a team to identify a “gender problem on campus” and create a podcast that convinces listeners to care about it.

UW-Madison spokesman Greg Bump told Campus Reform that students completing assignments like this are not graded on whether they “agree or disagree with a particular viewpoint.”

“The goal for students who choose to take these courses is to deepen their understanding of gender, identity and related issues, including sexual violence,” he said. “Students are graded on their ability to critically analyze the material, not on whether they agree or disagree with a particular viewpoint.”

Students were asked to find a “concrete example” of a step they can take to address “racial and ethnic inequality” from their position and share it with the class on a discussion forum.

People watch and explain your findings “along the lines of class, gender, sexuality, and ethnicity”

This assignment for an Introductory Sociology course sent students out into public social settings—restaurants, parks, or other off-campus locations—to make observations and take notes about the setting and people. Then, students were asked to write an “autoethnographic essay” that discussed “how aspects of one’s identity along the lines of class, gender, sexuality, ethnicity, and/or race may have shaped one’s data collection as well as the relationship to the setting and others within it.” 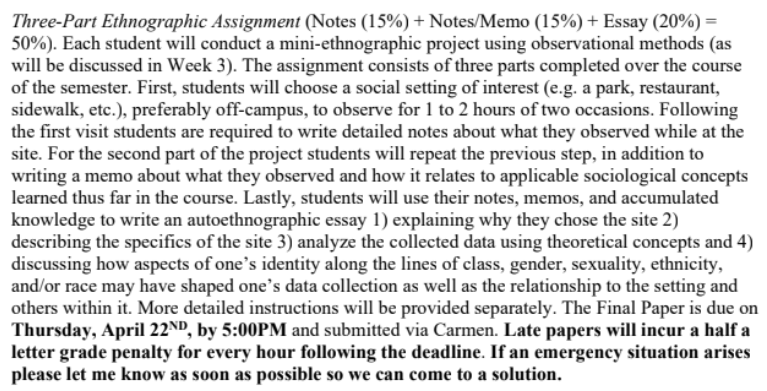 Write a letter confronting your racist friend or relative

Rather than write a traditional essay, students in this class were asked to prove their knowledge of Ijeoma Oluo’s So You Want to Talk About Race by writing a letter to a “friend, roommate, family member, or co-worker” who may “espous[e] racist views, den[y] racism or privilege, and/or ignor[e]/den[y] systemic, institutional racism-.”

“It is fair to include how their racism has made you feel, but the bulk of the paper needs to show your familiarity with the Oluo book,” the instructions state. 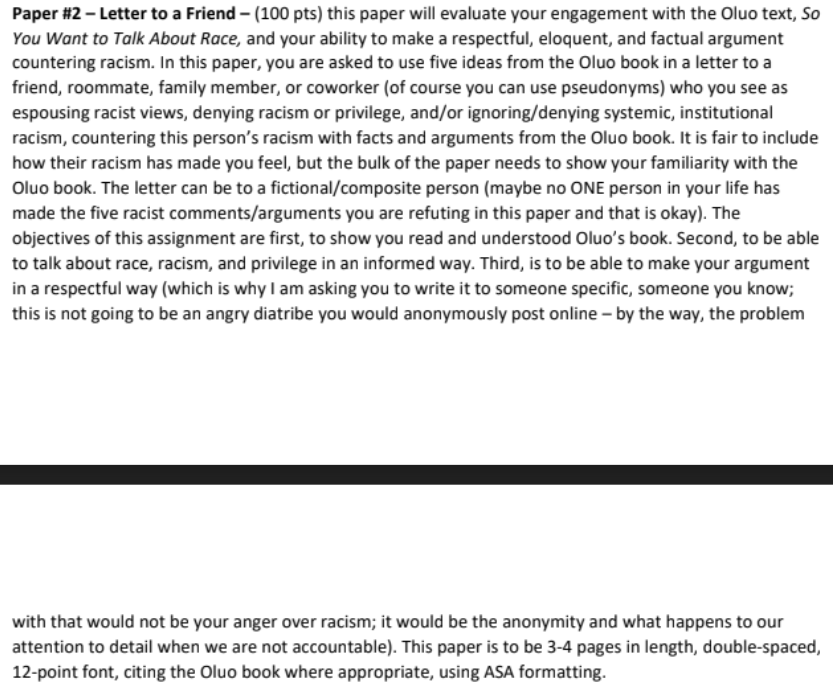 Students in this class were given two possible topics for their final essay paper, both assessing how social justice movements can best move forward. The first topic asks students to “analyze in-depth one form of inequality produced by gender or sexuality” and argue how “policy-makers or feminist/LGBTQ+ activists” should solve the issue.

This syllabus posed weekly questions for students to consider as they learned. Many contained built-in conclusions, like “Why do policing and social control target communities of color?,” “How does class, gender, and race determine our experiences with the criminal justice system?,” and “How can [intersectionality] help us to better understand criminality and deviance?”

In this Gender & Society course, gender is asserted to be “assigned” and characteristics of gender are described as “imposed on individuals, starting in infancy.”

A section of this syllabus was dedicated to providing definitions for the terms “woman” and “man.” The course specifies that the terms are “socially defined categories which are distinct from the biological properties which differentiate males from females in the animal kingdom.” Rather, the course will distinguish the genders by the “cultural and social ideas of gender-appropriate behaviors and roles.”

In the first line of the course description, this instructor claims that “racism is back” in America and never actually left. The instructor continues to assert that Obama’s election “revealed how entrenched racism is in American society” and that white nationalists have since “begun to edge their way back to the center of American life and respectability,” as evidenced by the January 6th attack on the Capitol.

Curriculum is influenced by “social justice”

In a Juvenile Delinquency course, the instructor stated that social justice values will be reflected in class content.

"I am committed to social justice and the celebration of diverse and inclusive human cultures, which you will find reflected in my lectures, assignments, and selection of videos corresponding to each chapter,” the statement says.

The Real World by Kerry Ferris and Jill Stein

You May Ask Yourself: An Introduction To Thinking Like A Sociologist by Dalton Conley

Campus Reform reached out to every university with a class syllabus featured; this article will be updated accordingly.