Have you or a loved one been 'affected' by 'free speech?' Colorado State University has resources to help.

A sign at Colorado State University lists resources available to students who have 'been affected by a free speech event on campus.'

CSU has consistently been a hostile environment for free speech, especially for conservative organizations.

Colorado State University (CSU) is promoting resources for students who may be affected by free speech events that occur on campus.

“If you (or someone you know) are affected by a free speech event on campus, here are some resources,” reads the sign, which Turning Point USA Rockies Territory posted a picture of on its Instagram account.

The university's sign refers students to 17 departments that can help, Multicultural Counseling, Incidents of Bias Reporting, the Office of Equal Opportunity, and a Victim’s Assistance Hotline. 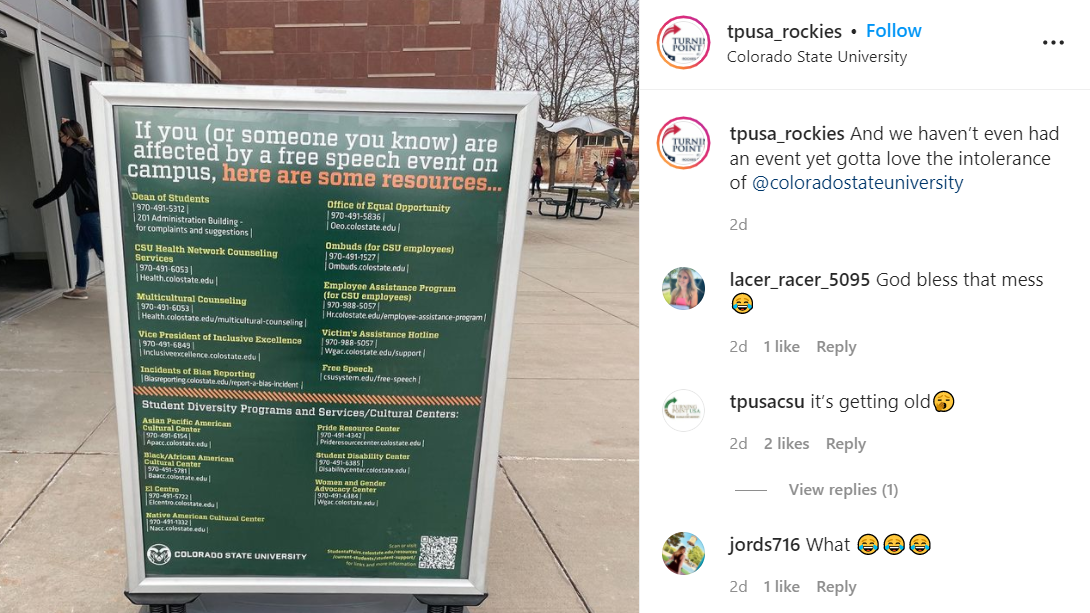 Services specifically for university employees are also noted, including the Office of Ombuds, and the Employee Assistance Program.

The Rockies account called out the school for “intolerance,” noting, “And we haven’t even had an event yet gotta love the intolerance of @coloradostateuniversity."

Colorado State University has consistently been a hostile environment for conservative organizations, particularly in the fall 2021 semester.

On Sept. 17, a student was filmed harassing the group members calling them “right-wing goons” and admitting “disrupting one of your activities is actually probably one of the most ethical and best things I can do with my time.”

One week later, another video highlighted a leftist student admitting to knocking down the chapter’s property before slapping a member of the group.

That same month, Campus Reform reported that CSU students penned a letter to the university administration demanding efforts to defund the police after they protected street preachers advocating on public campus property.

On Oct. 5, a student was caught stealing a sign advocating against vaccine mandates. The same students called the chapter members “deranged” during a discussion on abortion.

In 2019, Campus Reform reported that university President Joyce McConnell equated campus hate crimes to an impending Charlie Kirk appearance on campus. McConnell also acknowledged that security would be in place as Kirk has been known to “spark protests” on college campuses.

According to the Foundation for Individual Rights in Education, Colorado State University has a yellow speech code rating, meaning the university has "at least one ambiguous policy that too easily encourages administrative abuse and arbitrary application."

Campus Reform has reached out to Colorado State University and TPUSA for comment. This article will be updated accordingly.