Wentworth Institute of Technology hosted an explicit lecture on female sexuality that included men and discount codes to an adult store.

The program tours college campuses across the country.

Self-proclaimed sex educators Lindsay Fram and Marshall Miller spoke to students at Wentworth Institute of Technology Tuesday, telling them how they can achieve "The Big O," referring to the "female orgasm."

Miller's organization, Sex Discussed Here!, puts on the program "I Love Female Orgasm" across the country.

Campus Reform obtained a screenshot of a university email promoting the I Love Female Orgasm at the Boston school. The communication states that admission was open to "orgasm aficionados and beginners of all genders" that wanted to learn "about everything from multiple orgasms to that mysterious G-spot."

"Whether you want to learn how to have your first orgasm, how to have better ones, or how to help your partner, [the presenters] cover it all with lots of humor, plenty of honesty, and an underlying message of sexual health and women's empowerment," the email read.

Though the event is marketed as a women's program, it encompasses both men and women.

I Love Female Orgasm's "LGBTQ-Inclusive" webpage includes testimonials from attendees at past events praising the organization for making the "women's empowerment" event also about men.

"It didn't make it specifically women with vaginas," one student says in the testimonial "Women doesn't necessarily mean you have a vagina."

"Our presenters use terms women and men, along with transgender and non-binary, when they are speaking about gender identity," Sex Discussed Here! Co-Founder Dorian Solot told Campus Reform.

To date, I Love Female Orgasm has toured across the United States to visit academic institutions in 45 states and has delivered more than 700 presentations. 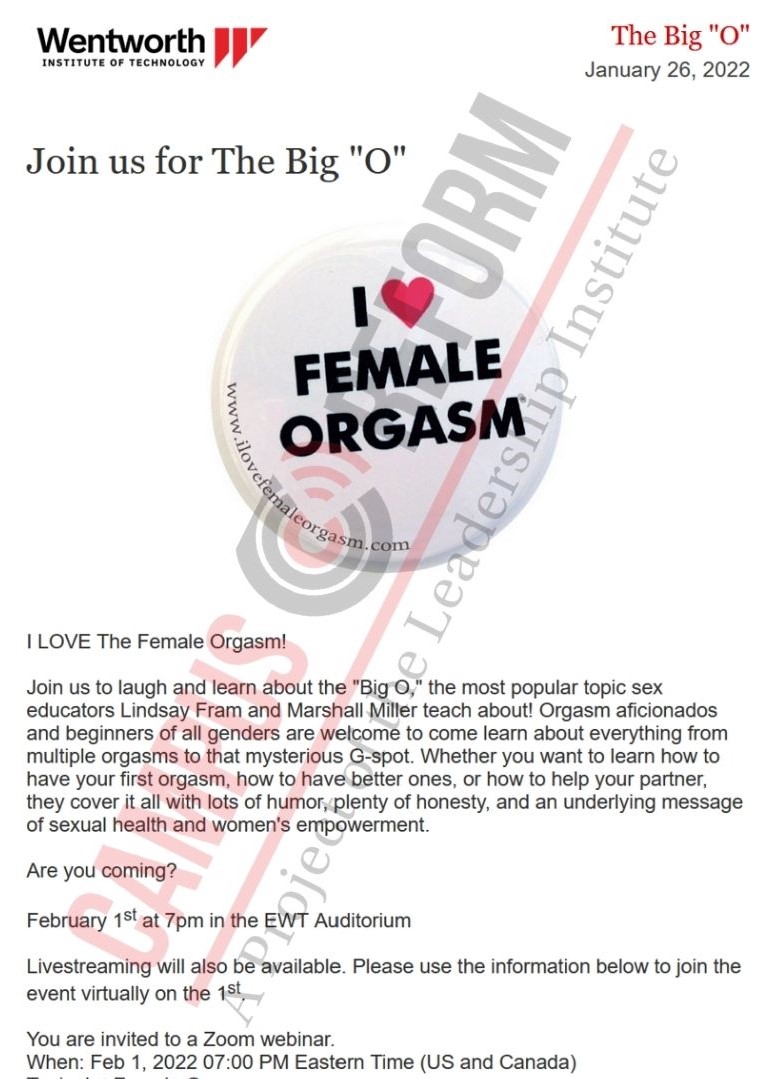 The program at Wentworth included lectures on "faking it," navigating female anatomy, and tips for achieving sexual pleasure whether with a partner or alone.

[RELATED: Pornography course at Rutgers examines 'Gender and the Body']

"The first few times I, you know, had sex, I was not saying no to things that were not good. And it's because I thought that's what I was supposed to be attracted to," Eilish stated.

I Love Female Orgasm ended the program by giving students a discount code to Early to Bed, a "feminist, sex-positive sex shop" that specializes in "helping people of all genders and orientations explore their sexuality to the fullest."

The program is scheduled to travel to New York, where it will address Rochester Institute of Technology students on Thursday.

Campus Reform contacted Wentworth Institute of Technology and the Center for Wellness to inquire about how the event was funded. This article will be updated accordingly.