The Department of Education recently announced that it will investigate claims of anti-Semitic curriculum and behavior at Brooklyn College.

A Title VI complaint was filed last year after two anonymous students reported being discriminated against due to their ethnicity.

The US Department of Education has opened an investigation into a Title VI complaint that was filed last year by The Louis D. Brandeis Center for Human Rights Under Law.

These students alleged that they experienced “severe and persistent” harassment by peers and professors who had made antisemitic remarks.

[RELATED: ANALYSIS: DEI initiatives create environment where ‘inclusion does not apply to Jewish students on campus’]

The Department of Education's website explains that, "Title VI of the Civil Rights Act of 1964 protects people from discrimination based on race, color or national origin in programs or activities that receive Federal financial assistance."

“In class lectures and course materials, professors have maligned Jews on the basis of race and ethnic identity by advancing the narrative that all Jews are white and privileged and therefore contribute to the systemic oppression of people of color," the Brandeis Center's complaint reads.

[RELATED: MARSCHALL: I've taught writing about the Holocaust to college students. This is what Whoopi Goldberg and her critics need to understand.]

In a Feb. 3 press release, the Brandeis Center stated that such incidents were part of a pattern of anti-Semitic harassment in the program.

“Brooklyn College unequivocally denounces antisemitism in any form and does not tolerate it on its campus," the statement reads. "While the College cannot comment on ongoing investigations, it is committed to working cooperatively and fully with the U.S. Department of Education.”

In October 2021, the American Jewish Committee reported that a quarter of American Jews had been targets of anti-Semitism in the previous twelve-month period. 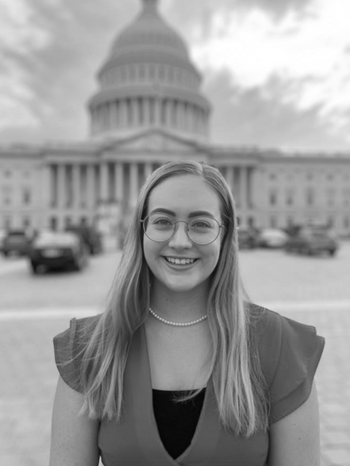 Alexis Purpura is a Florida Campus Correspondent for Campus Reform. She is majoring in international studies with a triple minor in political science, anthropology, and French at the University of North Florida. She is the secretary for the Turning Point USA chapter at her college and is involved with PragerForce and Live Action.