The post called for students to “boycott classes on Israel or those taught by Israeli fellows.”

The student group asserts that there is "no nuance" to the over 2,000 year conflict.

Campus Reform has been at the forefront of reporting the rise of antisemitism on college campuses.

A student group at the University of Chicago warned fellow students not to take "SH*TTY ZIONIST CLASSES." It did so the day before Holocaust Remembrance Day.

“DON’T TAKE SH*TTY ZIONIST CLASSES," read the Instagram post from the school's Students for Justice in Palestine chapter, calling on peers to boycott any classes “on Israel or those taught by Israeli fellows. By attending these classes, you are participating in a propaganda campaign that creates complicity in the continuation of Israel's occupation of Palestine.”

“Boycott these classes that serve as vehicles to spread Zionist propaganda on American college campuses," the group continued, adding "If you or anyone you know are taking these courses, DROP THEM."

[RELATED: Students for Justice in Palestine calls for impeachment of pro-Israel Jewish student, backs down after lawyers get involved]

In the same post, the group claimed that the “Jewish national identity is a recent invention of the settler-colonial Zionist project.”

The classes listed include “Multiculturalism in Israel, Narrating Israel and Palestine through Literature and Film and Gender Relations in Israel.” 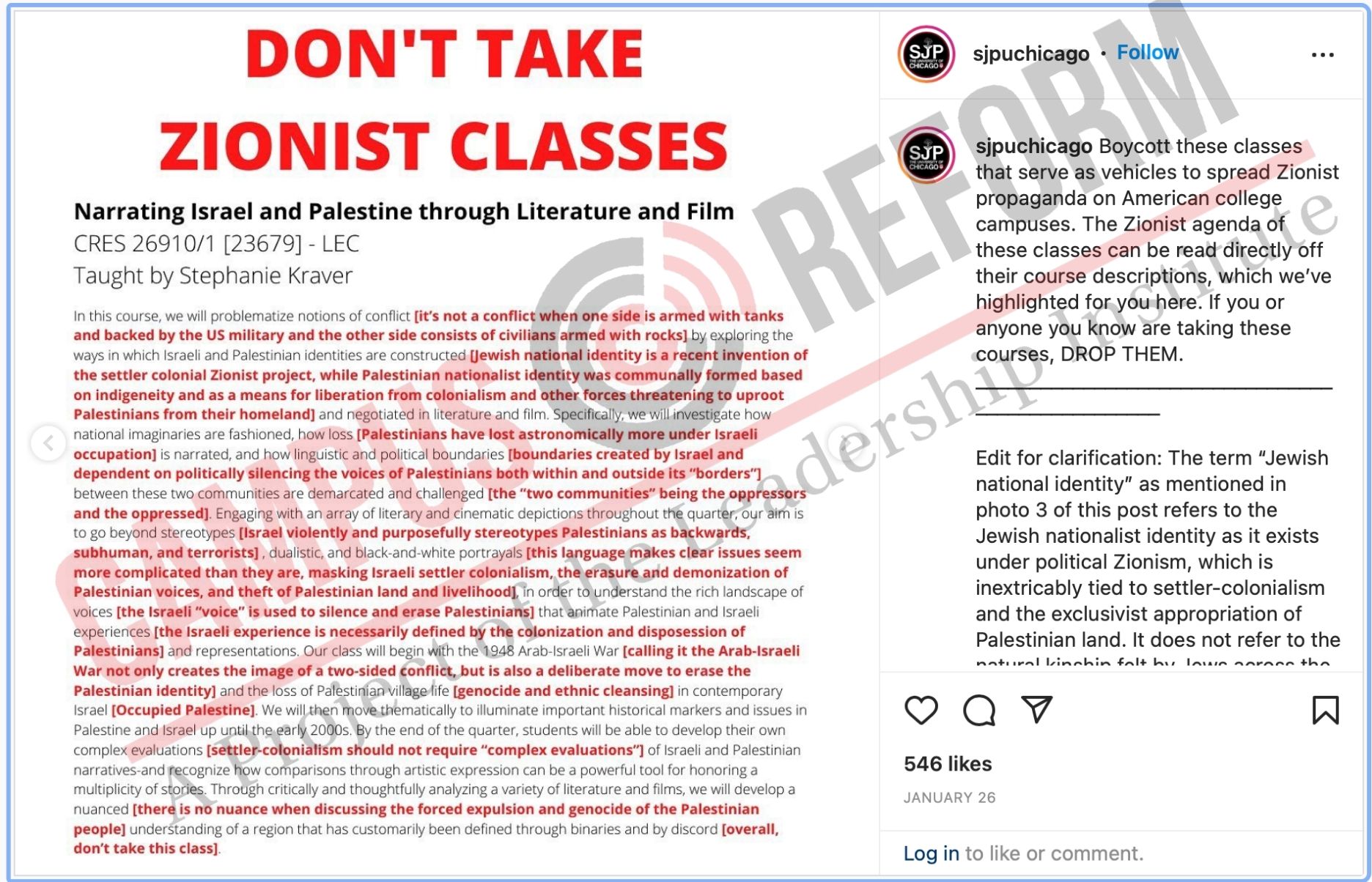 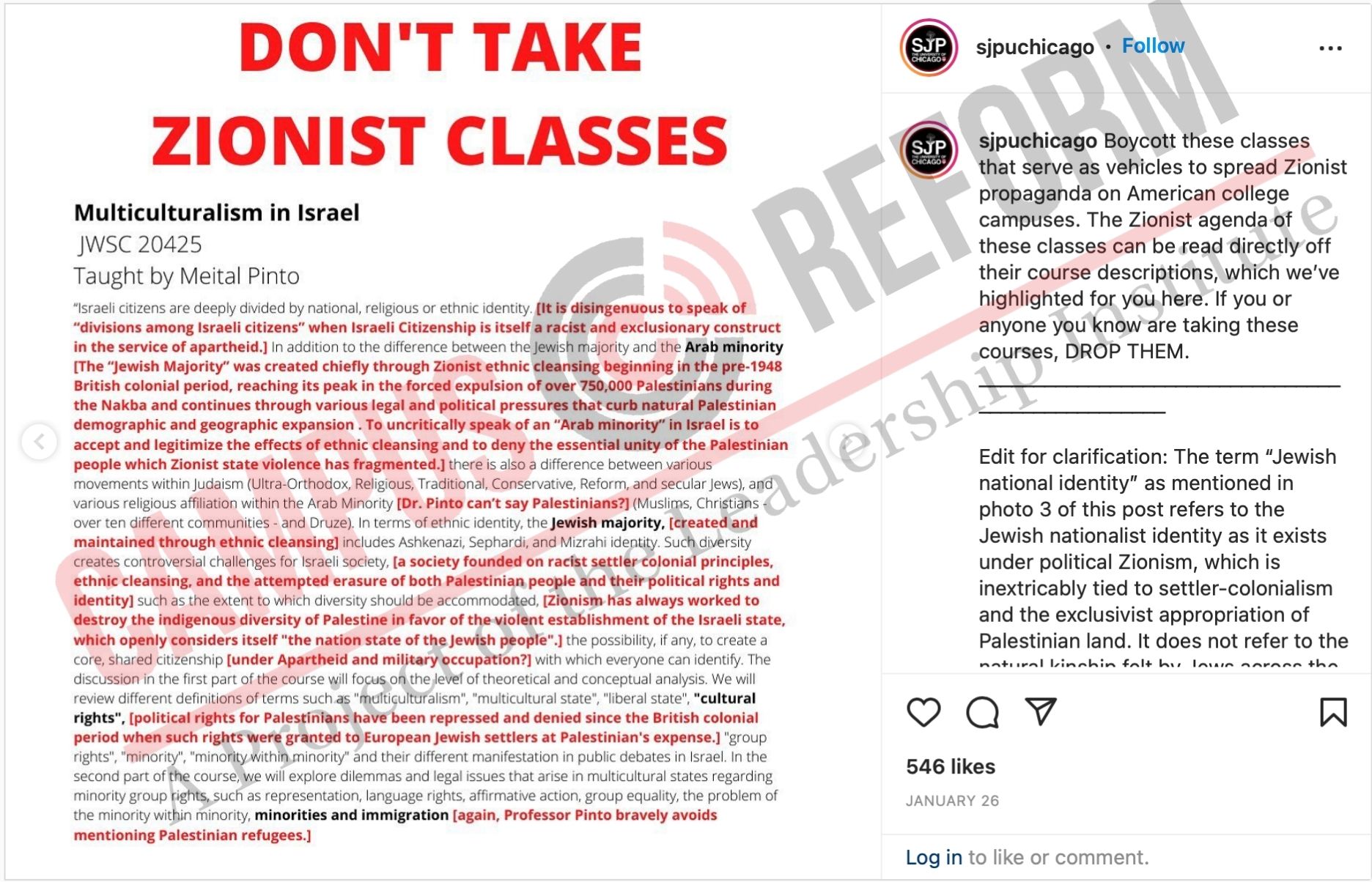 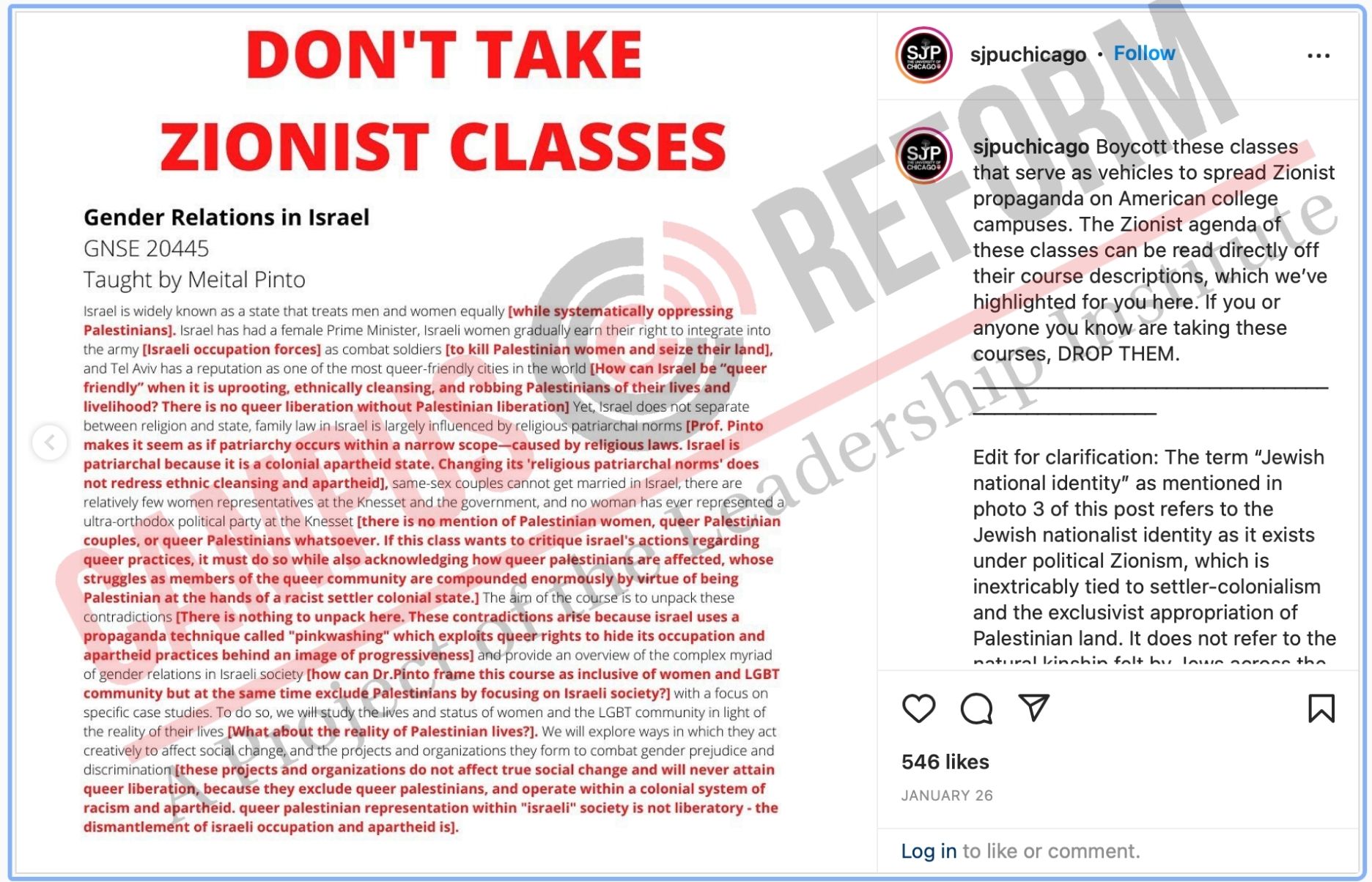 According to its course description "Multiculturalism in Israel" course addresses "multiculturalism and its manifestation in Israeli society," as well as "dilemmas and legal issues that arise in multicultural states regarding minority group rights, such as representation, language rights, affirmative action, group equality, the problem of the minority within minority, minorities and immigration.”

According to the Gender Relations course description, the class “will study the lives and status of women and the LGBT community in light of the reality of their lives. We will explore ways in which they act creatively to affect social change, and the projects and organizations they form to combat gender prejudice and discrimination.”

Each slide of the Instagram post rewrites the various course descriptions of the aforementioned, inserting corrective suggestions such as “there is no queer liberation without Palestinian liberation” and “Israel is patriarchal because it is a colonial apartheid state”.

The post continues to say that the conflict “should not require complex evaluation” and contains “no nuance.”

An account called "@jewishoncampus" responded to the post by noting that “Blocking conversation blocks peace. We should be having conversations, not shutting them down."

“SJP is using boycotts to try to push through their agenda. If you disagree with the professor, raise an objection. In fact, I would encourage everyone to take these classes and ask hard questions. That's why you came to this school.” writes a commenter on the post.

“Boycotting classes related to an entire country is not the solution, it only perpetuates a cycle of ignorance and hate.” writes another.

UChicago’s mission statement reads as follows: “Let knowledge grow from more to more; and so be human life enriched.”

Campus Reform also covered a Palestinian Solidarity Committee protest at the University of Texas at Austin. The protest called for an intifada- a, usually armed, uprising or resistance.

Campus Reform also recently reported on a study published by the Heritage Foundation that “highlighted anti-Semitic tweets made by staffers of multiple colleges and university Diversity, Equity, and Inclusion programs.”

SJP did not respond to Campus Reform’s request for comment.