In light of this report, Campus Reform investigated five Amnesty chapters on university campuses to see what causes they promote.

“Amnesty’s report manipulates and distorts international law, Israeli policy, and events on the ground, as well as denies the Jewish people their right to sovereign equality and self-determination,” NGO Monitor wrote Jan. 31 after receiving the leaked document.

Other critics included the Anti-Defamation League, the Israeli foreign ministry, The Wall Street Journal, whose editorial board called the report "a libel that distorts history."

"The report is a denunciation of the very existence of Israel as a refuge for the Jewish people," the editorial board wrote.

Also in response to the Amnesty International report, the Jewish National Fund-USA invited people to explore “the real Israel” through its online resources and programming.

“We must continue to respond to hate by celebrating Israel’s vibrancy and the beauty of Zionism," Jewish National Fund-USA CEO Russell F. Robinson said in a news release.

In light of this report, Campus Reform looked into Amnesty International chapters on America's college campuses.

Campus Reform found that in many cases, the college chapters frame leftist causes as abuses against what Amnesty International defines as the "human rights enshrined in the Universal Declaration of Human Rights" in its mission statement.

Unlike these college chapters' programming and social media announcements, neither "reproductive rights" nor "climate" appear in the Universal Declaration of Human Rights.

The results are below.

In the fall 2021 semester, the William & Mary Amnesty International chapter organized three subcommittees focusing on climate justice, "reproductive rights," and housing policy and homelessness, according to the group's Instagram account. 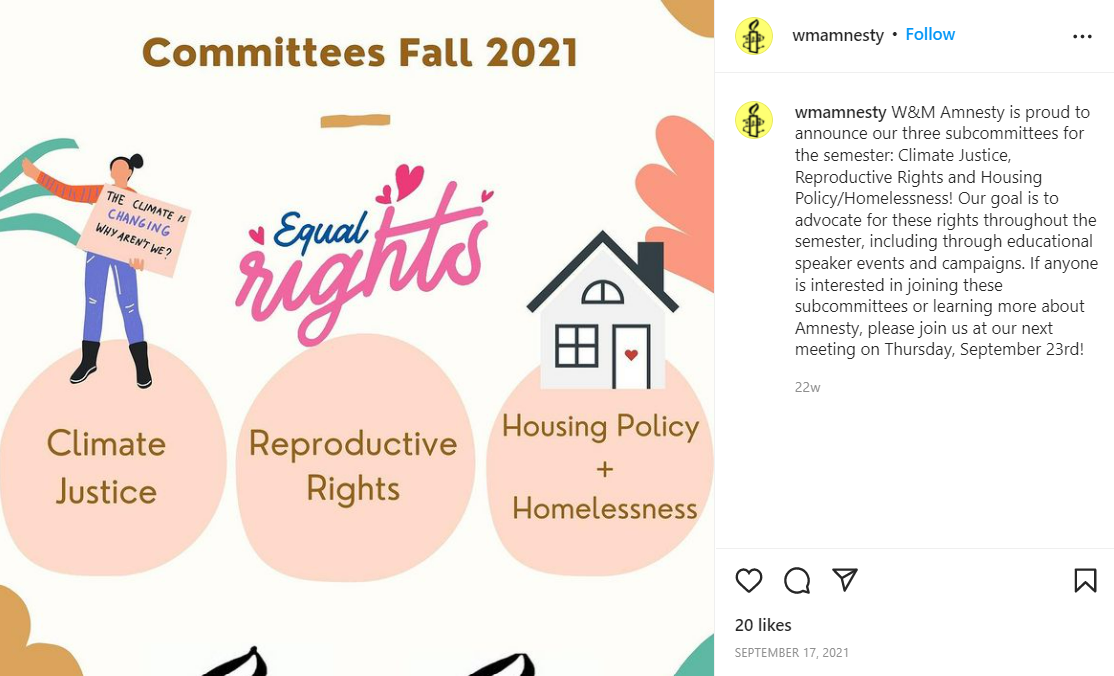 “Our committees were actually chosen by our members based on what they wanted their focus to be last semester, as there are unfortunately many human rights violations, and we want to give our full attention to a couple at a time,” Social Media Chair and Co-Coordinator Hannah Mays told Campus Reform.

In March 2021, this chapter hosted a discussion on “ecofeminism” for Women’s History Month.

Following the Kyle Rittenhouse trial verdict, the group also shared Amnesty International USA’s response in which the national organization argued that the jury's not-guilty verdict revealed that the justice system is purportedly “predicated on white supremacy and anti-Black racism.”

The University of Pennsylvania chapter supported Amnesty International’s national campaign urging the Biden administration to free “all Immigration and Customs Enforcement detainees,” according to The Daily Pennsylvanian student paper.

Regarding campus COVID policy, one member of the group also told the paper in March 2021 that “Penn's decision to introduce indoor dining in campus dining halls is a human rights violation because it is putting dining workers at risk of contracting COVID-19.”

Members also intended to lobby and demonstrate against an in-person fall 2021 semester, the paper reported.

The University of Chicago

This chapter recently promoted the criticized report, “Israel’s Apartheid Against Palestinians: Cruel System of Domination and Crime Against Humanity" on its Instagram account. 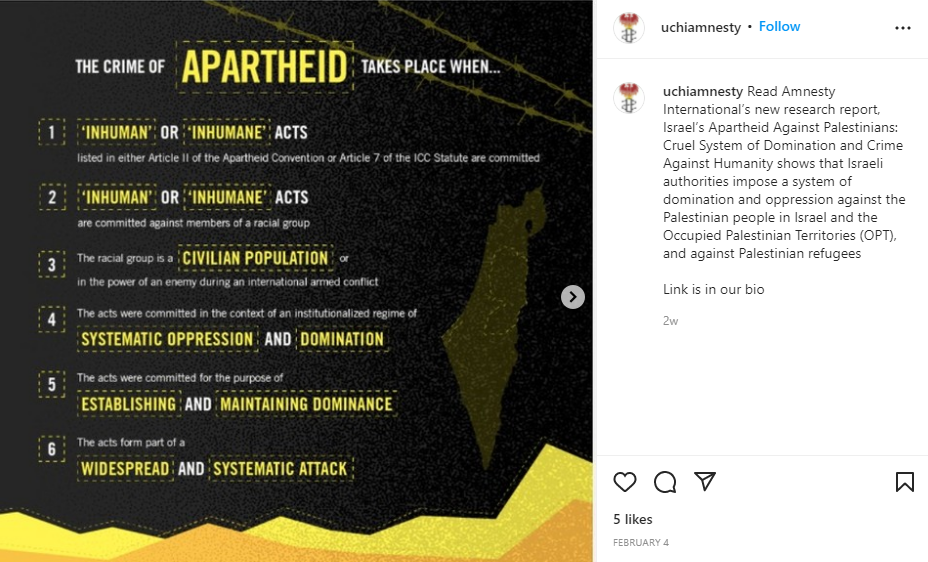 In previous years, the University of Chicago chapter has used its newsletter to address issues like “LGBTQ+ and Reproductive Rights in the US and around the world.”

In June 2020, the chapter also encouraged participation in a “Black Students: Assure your right to grieve” campaign, which asked professors to cancel finals so students can “grieve the loss of black lives to police violence.” Failing to enact universal pass/fail policies was discrimination by the university, the event description claimed.

Amnesty International at Vanderbilt University put on a mask drive for “individuals experiencing homelessness” in September 2020. 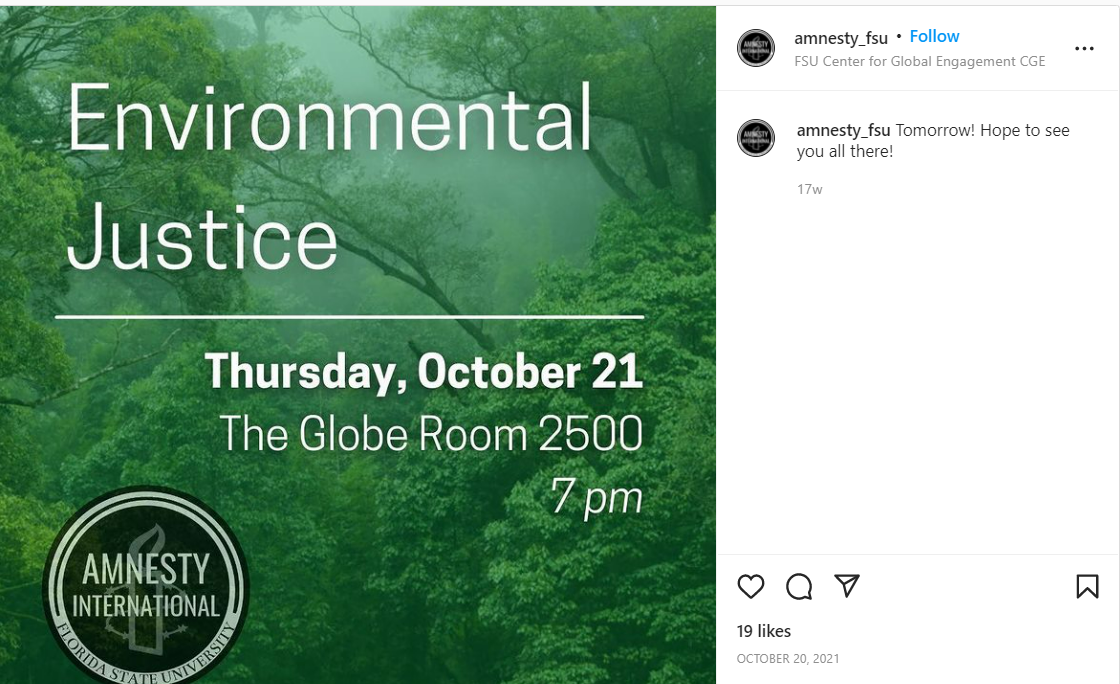 At an advertised event in April 2021, the group identified healthcare as a fundamental human right.

The group also hosted a discussion on “White Supremacist Violence at the US Capitol” in January 2021.

Campus Reform reached out to Amnesty International and every university group mentioned; this article will be updated accordingly.