EXCLUSIVE: Police lacked motivation to arrest George Floyd, according to this pro-BLM professor

A University of California, San Diego, psychology professor appears to refute that George Floyd’s use of counterfeit bills was a factor leading to his arrest in a recently recorded lecture.

Campus Reform obtained a recording of the lecture.

A University of California, San Diego, psychology professor appears to refute that George Floyd’s use of counterfeit bills was a factor leading to his arrest in a recently recorded lecture.

In the audio, Hanes instructed her students about the “arguments and counter-arguments to Black Lives Matter.” One of the arguments she addressed was George Floyd’s criminal activity before his arrest by Derek Chauvin.

“In fact, the speculation, the original speculations about his arrest, that use of a fake $20 bill and being high on meth were not true, and police motivations for arresting him were actually unknown,” Hanes said during the lecture.

The Washington Post and The New York Post have reported on the role of methamphetamine and the $20 bill in Floyd's death.

“So immediately after the video of George Floyd’s murder appeared online, police responded that Floyd was being arrested for using a fake $20 bill," she added. "But this has then been shown to be a complete lie. It has also been said that he was high on meth; also a complete lie.”

Hanes did not respond to Campus Reform’s request for clarification of these statements. The recording of the lecture, which was originally available as an unlisted YouTube video, has been changed to private. 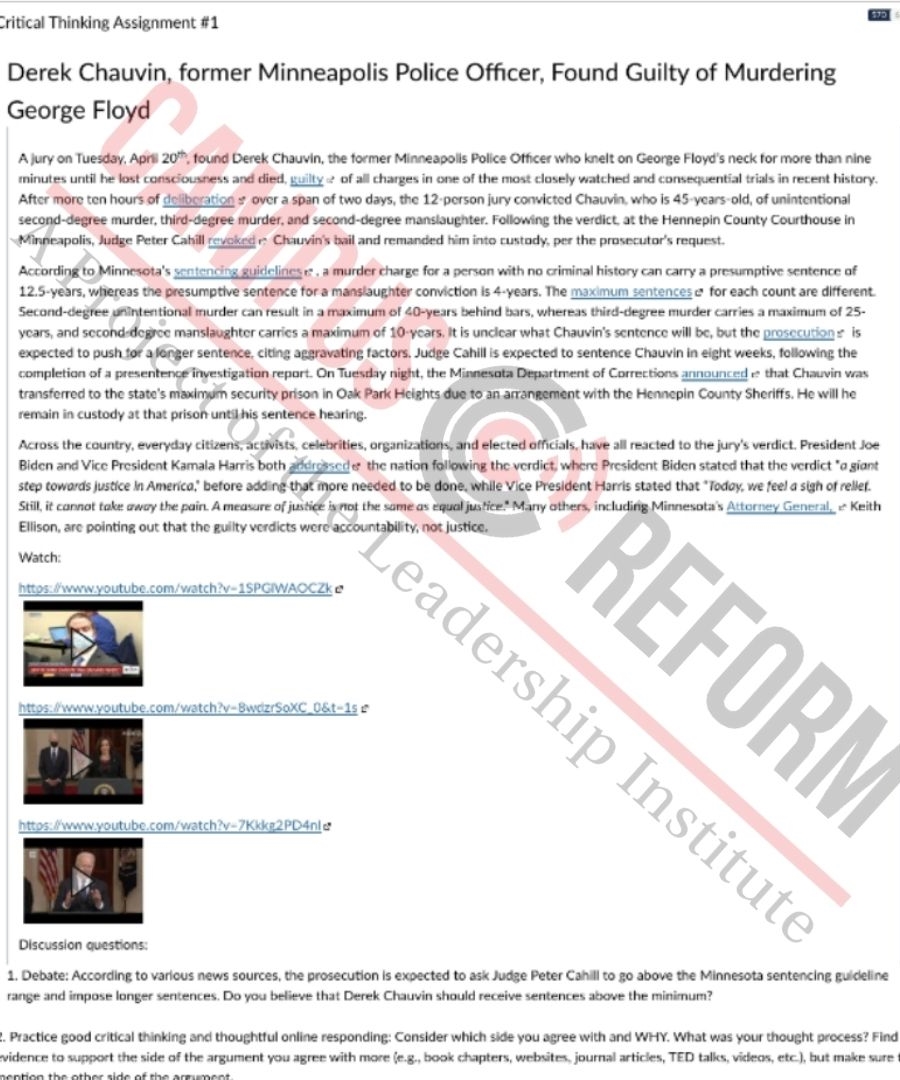 A student in the class told Campus Reform that Hanes’ lecture went beyond her statements on the George Floyd killing, going as far as defending Black Lives Matter (BLM) as an ideology and an organization.

“The professor went on a rant about how BLM is a response to the United States' systemic racism and police brutality, stating that BLM's mission is to ‘eradicate white supremacy,’” the student said. “She defended an organization that advocates for the Defund the Police Movement and believes that All Cops are Bastards, while she made counterarguments for the statement All Lives Matter.”

Hanes responded to the “All Lives Matter Slogan” during the lecture by stating, “the counter-argument to that is that white lives very clearly do matter to society.”

“White lives matter is someone already winning the race who started out in first place complaining it’s unfair that someone else is getting help,” Hanes said in the recording. “So Whites hate hearing that they’re privileged, but they never had to question whether their race had something to do with a rejection or a disadvantage. Black Lives Matter is focusing on how skin color alone has a different effect on people of color.”

“Signing up for a college Criminology course, I didn't expect the lectures and assignments to be filled with liberal talking points, although maybe I should have,” the student said.

The student also said that a professor "rav[ing]" is "inappropriate and unacceptable."

[RELATED: These are the demands the ‘Black Lives Matter at School’ conference issued for K-12 education]

“No [p]rofessor should ever use their platform to politically influence a students opinions based on that of their own by spreading false information about BLM, a hateful movement of phony warriors of so-called ‘social Justice’ led by the very political figures who have never once done anything to actually help Black Americans," the statement reads.

“Each assignment we have had in this class has been based on liberal headlines, such as Derek Chauvin's prison sentence, DACA, gun control, the decriminalization of hard drugs, and racial bias,” the student said. “I am extremely frustrated with professors pushing their liberal ideologies and anti-American speech on their students, as we are no longer being taught to critically think for ourselves and instead are being brainwashed to join the liberal mob and hate our great country."

The University of California San Diego did not respond to Campus Reform’s request for comment.