A mural containing Black Lives Matter, anti-police, COVID-19, and feminist imagery was painted in the library of a Florida university last semester.

The university informed a student that she would only be able to get a pro-police mural put up too if the request is sent by a faculty member.

A mural containing Black Lives Matter, anti-police, COVID-19, and feminist imagery was painted in the library of a Florida university last semester.

But when a student tried to get a pro-police mural put up as well, the hurdles started to appear.

The current mural at the University of West Florida contains multiple references to summer 2020, when the Black Lives Matter riots took place. A kneeling person is depicted in the foreground of protestors with their fists raised as a city burns behind them.

A woman with pink hair is also shown standing up to police officers in riot gear.

Lastly, an individual wearing a face mask stands next to what appears to be a police officer behind bars.

Campus Reform obtained photos of the mural from University of West Florida student Kenzie Cueno, who referred to the imagery as “selective outrage.”

“I personally found the mural to be a slap in the face to our law enforcement officers,” Cueno told Campus Reform.

Cueno reached out to her school in hopes of starting a mural project of her own. She said her project would serve to “pay a tribute to all our first responders to show that people do appreciate them!”

A few months after the mural was completed, Cueno reached out to UWF in hopes of getting approval for her project.

Campus Reform obtained a Nov. 15 email that Cueno received from the university's Dean of Libraries that explains that a mural is only allowed if the request is sent by a faculty member.

With these rules in place, Cueno has struggled making her project become a reality. 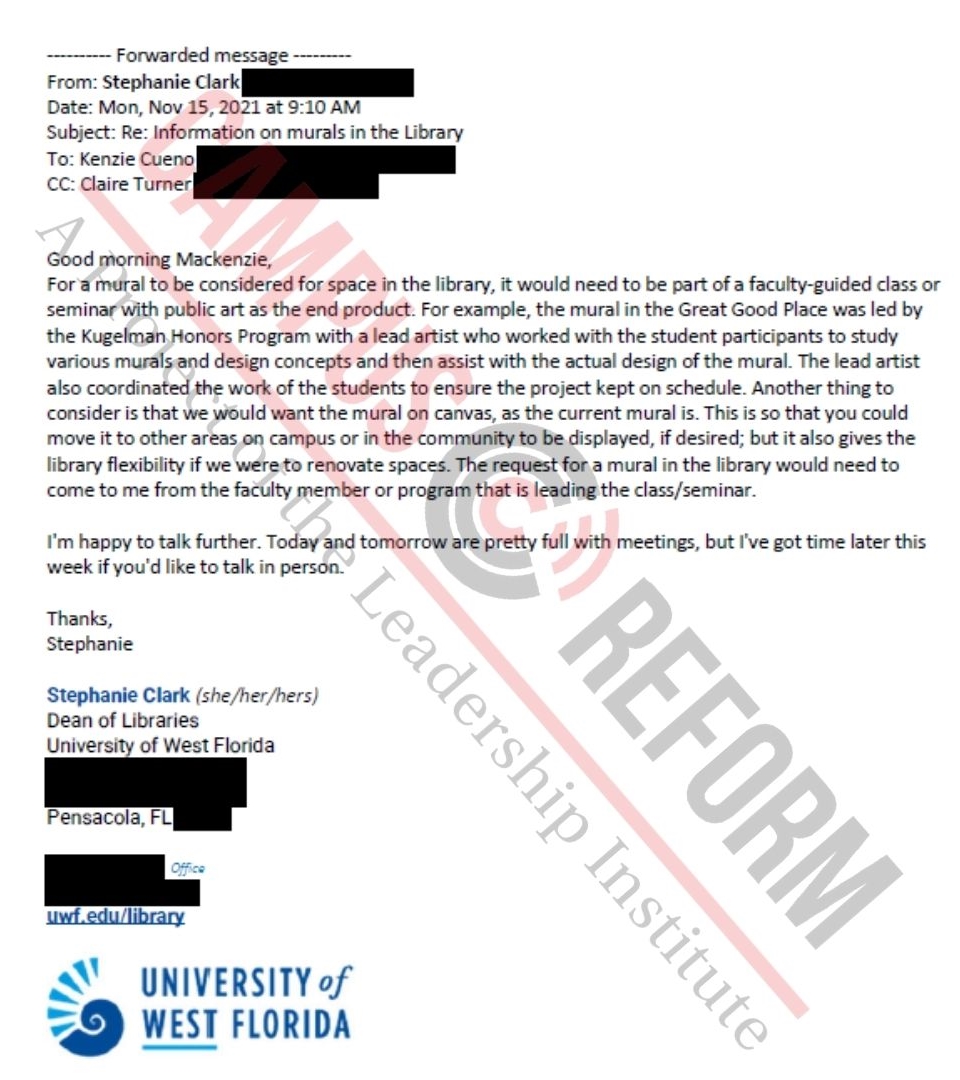 In June 2021, fifteen students were able to partake in this mural project because it was sponsored by the UWF’s Kugelman Honors Program.

Their mural project is now displayed in the library in a space called "The Great Good Place."

“I think the value in public art is ensuring the conversation about racial justice will be ongoing, even after this particular moment in history has passed,” Gregory Tomso, director of the Kugelman Honors program, said in an interview with a university outlet.

Lead artist Marzia Ransom was also quoted saying, “The mural is a collective statement of friendship and brotherhood as we work together trying to fight racism in every form.”

In regards to the current mural, Cueno points out, “The part where the city is burning behind protesters with their fists up seems like inciting violence and glorifying crime as a way of ‘protesting.’”

The way Lady Liberty is portrayed also made Cueno “quite honestly upset.”

“I was quite honestly upset over the depiction of Lady Liberty holding a snake instead of a torch," Cueno said. "They completely disregarded the significance of our Lady Liberty.”

Cueno also commented on the mask-wearing in the mural.

“The masks being painted look to me as virtue signaling. 'Look at us burning down businesses, destroying cities but at least we’re wearing our masks so we don’t get covid," the student said.

Trenton Lamar, another student at the University of West Florida, feels that the mural “[instills] an image of violence towards police.”

“The Black Lives Matter movement caused mass destruction throughout all of the United States and the mural has even portrayed that as well,” Lamar told Campus Reform.

He added, “There is absolutely no need for something like that in a school environment.”

Campus Reform reached out to the University of West Florida, Gregory Tomso, and Marzia Ransom for comment, but did not receive a response.