The assignment was allegedly publicized in a now-deleted social media post by the student-led organization BYU Conservatives.

Professor Jane Lopez assigned the activity as homework and instructed students to photograph three representations of "Whiteness" on campus.

According to the assignment instructions, "Whiteness is defined as:

"(1) a location of structural advantage or 'race privilege'[;] (2) a 'standpoint' or place from which White people look at themselves, at others, and at society, and (3) a set of cultural practices that are usually unmarked and unnamed." 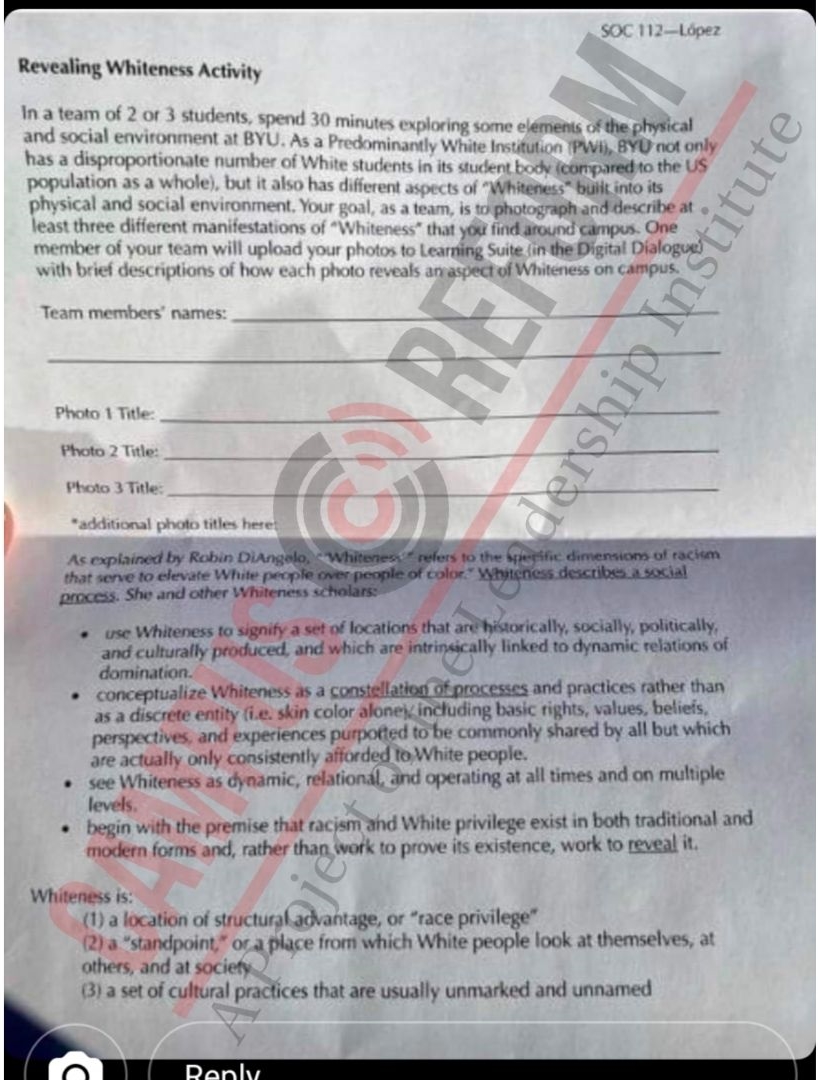 The assignment was allegedly publicized in a now-deleted social media post by the student-led organization BYU Conservatives. According to the group, they began facing backlash from university staff after the post was originally made.

A screenshot obtained by Campus Reform shows BYU Professor Eric Bybee claiming that the group had broken the university's Intellectual Property Policy and Honor Code. Bybee then asked for the post to be removed. 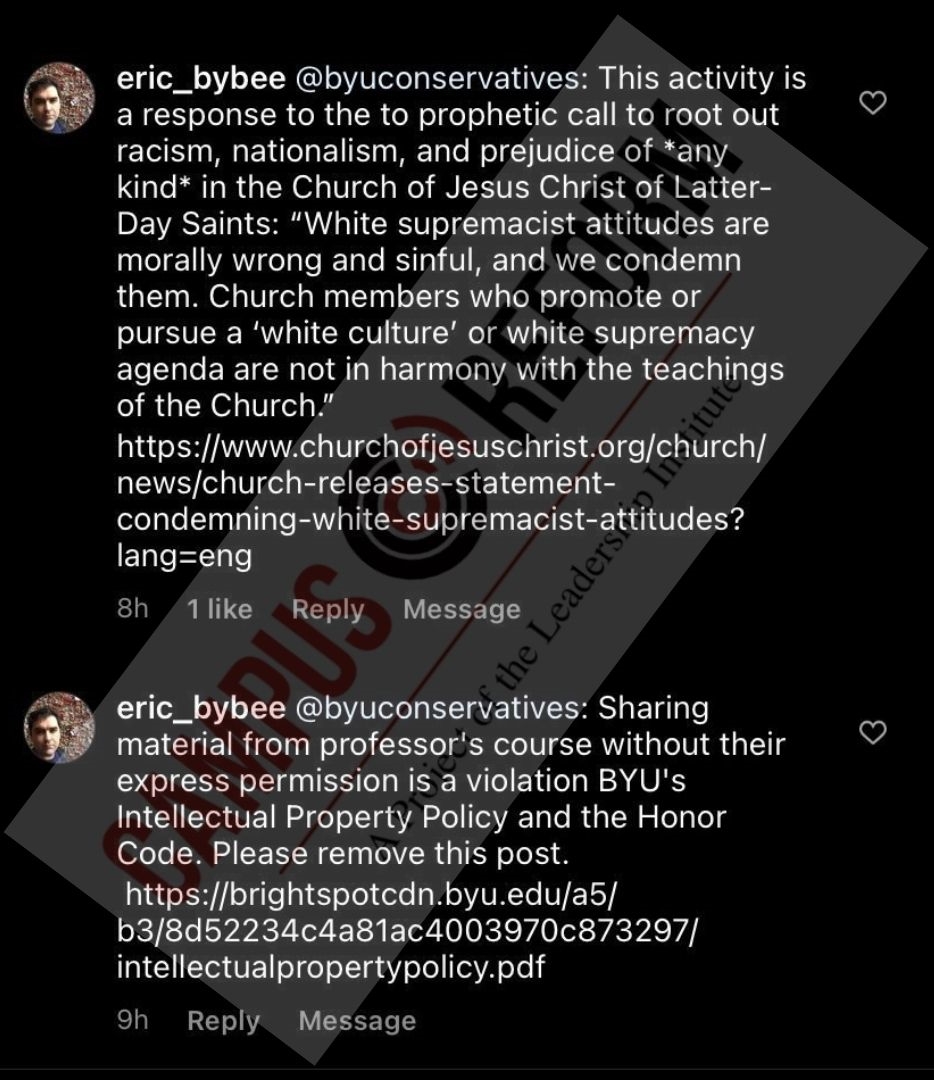 Additionally, the group says it received private messages from Bybee that accuses the students of "invit[ing] targeted harassment" of faculty members.

"Your beliefs do not give you the right to violate university/faculty member intellectual property and invite targeted harassment of one of my colleagues," he stated.

The students say Bybee also threatened to contact the "Honor Code office" and the "BYU Faculty Center" to investigate the social media account if the post was not removed.

He then listed specific names of individuals who have been associated with the organization. 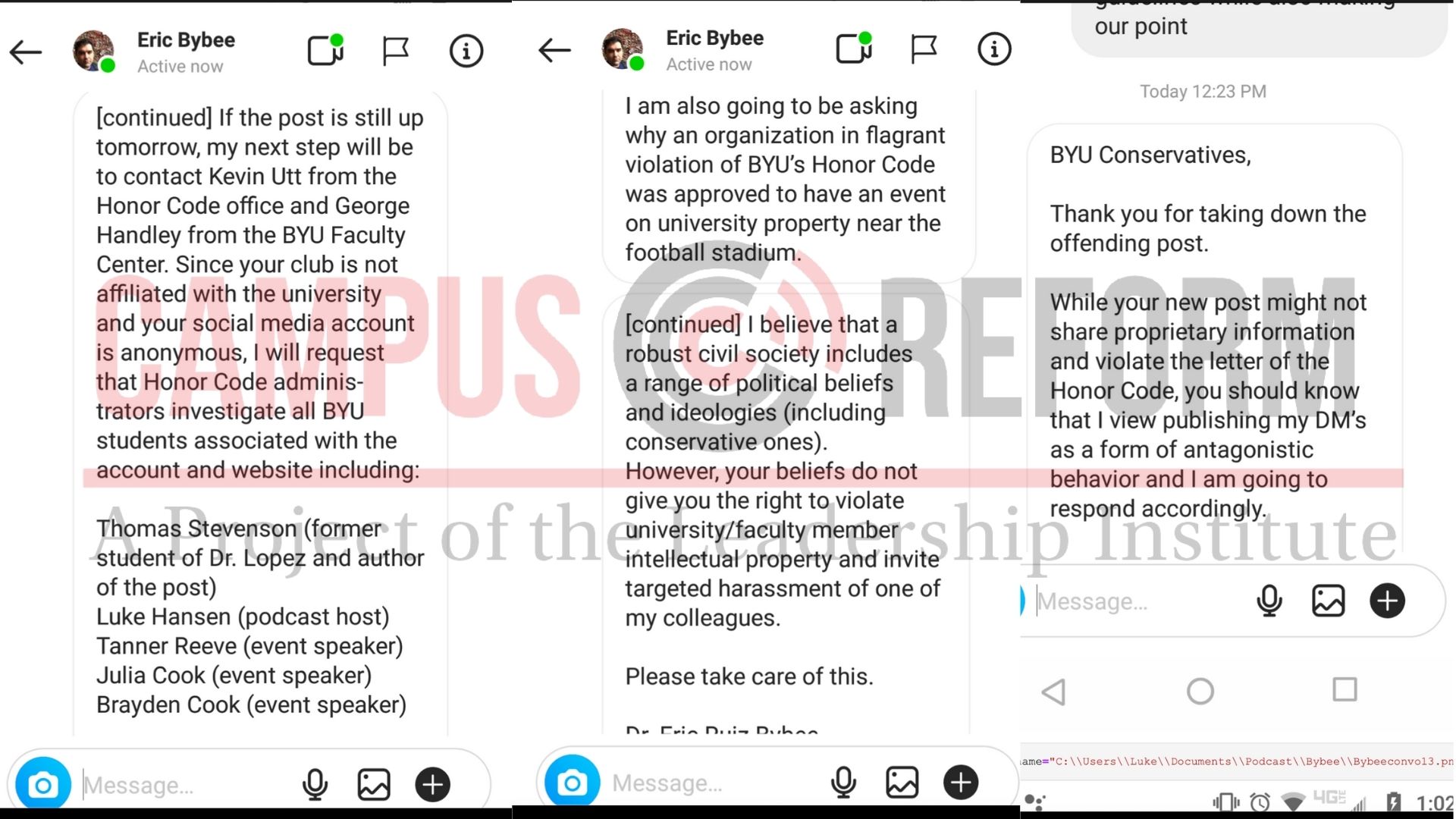 Although the original post was deleted, the BYU conservatives later reposted the assignment, along with the private messages with Bybee's name redacted.

In response, Bybee continued to message the organization, stating, “I would also invite you to reflect on the wide latitude that BYU has to police the behavior of students and faculty. Please understand that I am willing to use BYU’s unique policies in whatever way necessary to ensure that my colleges avoid the type of harassment that has become too common [in] other places.” 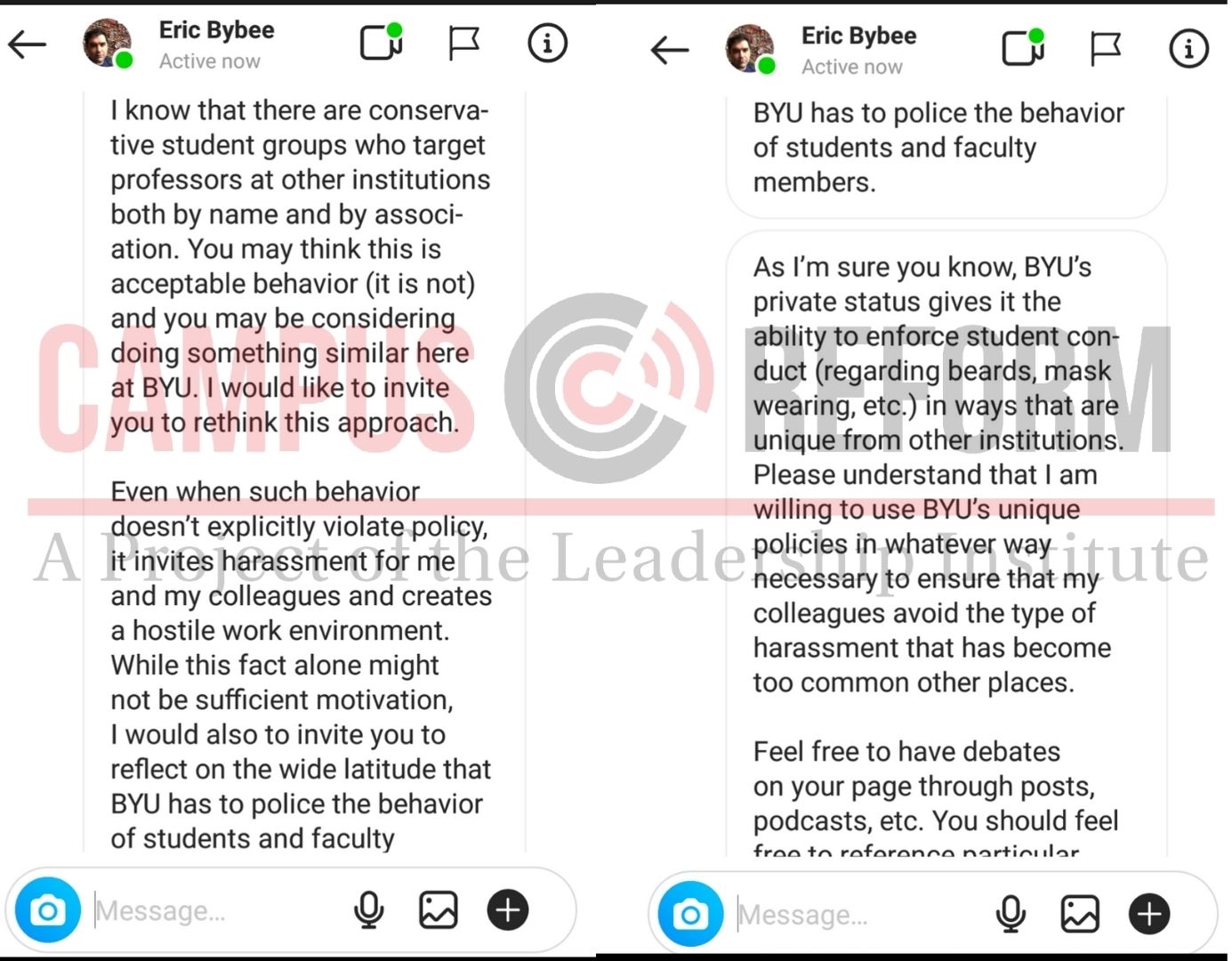 Professor Bybee responded to Campus Reform’s request for comment regarding his remarks on the group’s original post.

“Per BYU’s Intellectual Property Policy, all course materials created by professors are owned by the university," he explained. "Additionally, the Honor Code Office expressly prohibits the posting of 'proprietary course materials to 3rd party sites.'”

Furthermore, Bybee stated that he believed "conservative perspectives are a vital part of a healthy civil society" and that he "welcome[s] these perspectives in my classroom."

[RELATED: Warrant out for arrest of student protester who allegedly assaulted conservative student]

However, Bybee clarified that students must express their views without "violating academic honesty and the commitments that they made when they chose to come to BYU.”

“Our purpose with posting the assignment was commentary and criticism. We believe this falls under fair use law. We even spoke to the Honor Code Office and they admitted they were not sure if it did or not.”

Campus Reform spoke with the students who run the BYU Conservatives account. Both wished to remain anonymous.

One student described their surprise at the ferocity of the backlash.

“The barrage of comments, the professor claiming we ‘flagrantly’ violated the honor code, naming names of everyone he could find that might be a page admin, saying he would report it the next morning to the head of the entire honor code office in addition to some other department I had never heard of before, and accusing us of inciting targeted harassment. It was a lot,” the student recalled.

The other student told Campus Reform, “We get hate all the time and that is just how politics is. The assignment had been circulating for weeks online before we posted it."

"The key thing is that the left in the university doesn’t want its ideas exposed to others," the student continued. "Which is a weird thing if they actually believe their ideas are consistent with the truth.”

Campus Reform reached out to Professor Lopez and Brigham Young University. This article will be updated accordingly.