The University of Florida’s Pride Student Union hosted a series of 'SEXX Events' this month that included a Sex Toy Raffle and a 'Sex Work Talk' about "decriminalizing" the profession.

'Now that I am hearing more details about prostitutes coming to campus, I think it is totally bizarre,' one student told Campus Reform.

The University of Florida’s Pride Student Union hosted a series of "SEXX Events" this month that included a Sex Toy Raffle and a "Sex Work Talk" about "decriminalizing" the profession.

Campus Reform reached out to the Pride Student Union website. The organization provided a statement explaining how it received donations for the event.

Campus Reform has reached out to the UF Health Department to confirm this claim. UF Director of Communications Brittany Alana replied,  “Generally speaking, anyone on UF’s campus has the same free speech rights as they do in any other public space, and UF does not endorse or prohibit speech based on topic."

Kiran Shah, who is vice president of the university's Young Americans Foundation chapter, told Campus Reform that his organization opposed the use of SHCC funds.

“We support their right to use their own funds for free speech, but we are not okay with the use of UF Health funds for that purpose,” Shah said. 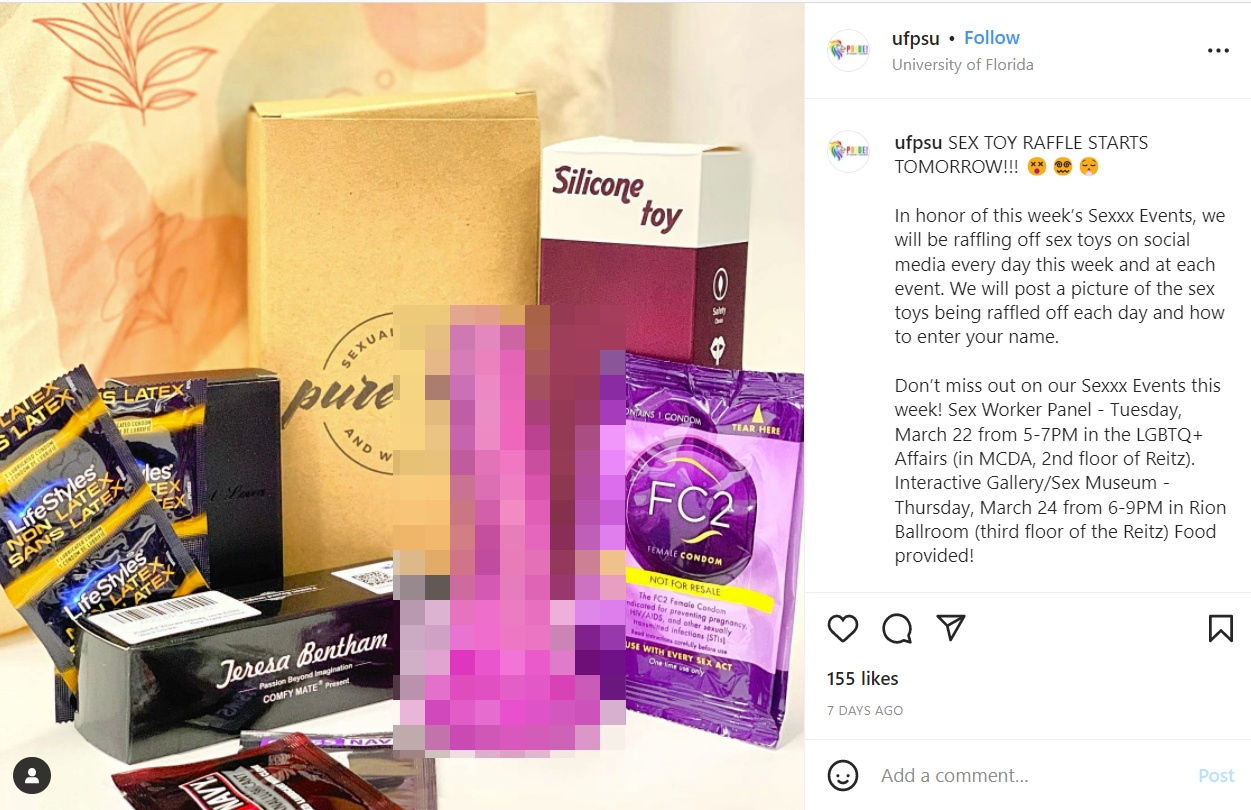 In addition to hosting a raffle to distribute sex toys to students, the union invited sex workers to be guest speakers so that the students could have the opportunity to listen and learn “from sex workers about their experiences via a panel.”

University of Florida student Lisa Winders told Campus Reform that extending an invitation to sex workers to speak on campus was "unexpected."

“I think it is something that is very unexpected. I am honestly interested in wanting to know what they have to say. I just wanted to know why, I feel like I want to know the purpose because [sex work] is illegal,” Winders told Campus Reform.

But not all students shared Winders' enthusiasm.

“I don’t think the University of Florida should be allowing these speakers to come at all and speak on campus. However, using funding meant for students is despicable,”  Andrew Faul said.

“Now that I am hearing more details about prostitutes coming to campus, I think it is totally bizarre. It is totally, in my opinion, demonic. It is really changing the culture of the UF Students, and how we think, and how we act in student culture,” he said.

The events ran from Mar. 21-25 both online and in-person at the J. Wayne Reitz Union.

During the forum, students were encouraged to ask sex workers about their profession.