'Hearing this from my university’s president made me feel uncomfortable expressing my opinions and values on campus,' one student told Campus Reform.

On Mar. 31, Washburn University President Jerry Farley sent a  campus-wide email denouncing Michael Knowles' campus event later that day. Farley had written that Knowles has a “history of inciting fear and distrust,” and stated he and his supporters have spread “hate and misinformation.”

Now, students are speaking against the university leader for airing his personal grievances against the Daily Wire host.

Claudia Fury, chairman of the Washburn College Republicans, provided a statement to Campus Reform on behalf of the organization.

“The College Republicans are disappointed in the response from Dr. Farley and hope that moving forward the administration seeks to represent and support all students, not just those they agree with,” she stated. 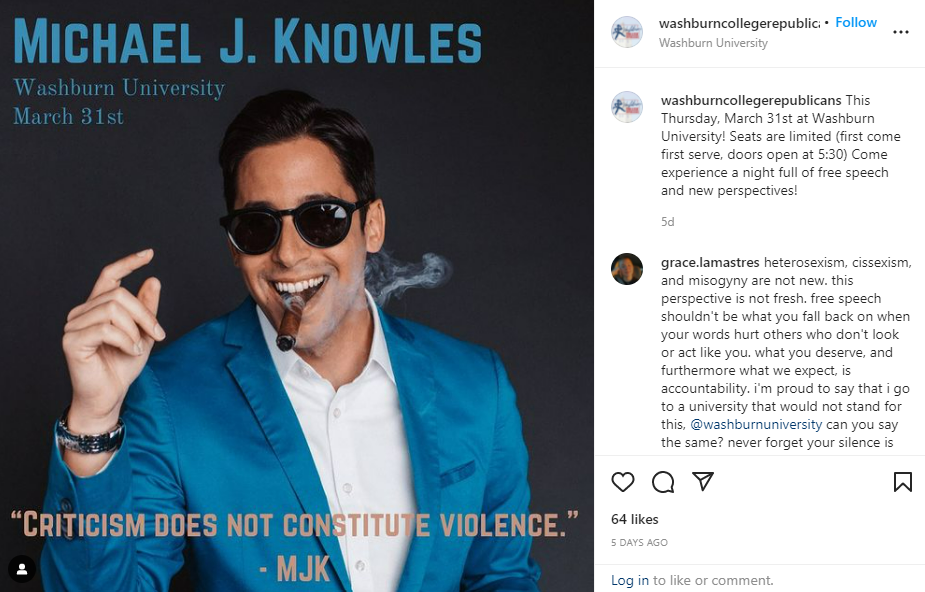 On Twitter, Michael Knowles stated that Farley was the one who signed the contract inviting him to appear on campus.

In his email, Farley wrote, "While I am strongly in support of first amendment [sic] rights, I am disappointed when those rights are used to make others feel unwelcome and even unsafe in our community."

Washburn president Jerry Farley, who personally signed the contract inviting me to come speak, just sent a campus-wide email condemning me for spreading "hate and misinformation"—two days before my speech is scheduled to take place. 🧵 https://t.co/U8cXRItLQb

Washburn University student Christopher Schenk told Campus Reform that he feels the email sent by his school’s president contradicts the university’s commitment to its “core values.”

“I was disappointed by Dr. Farley’s email, as it painted many students, like myself, as supporters of hate speech and as spreaders of misinformation,” he said. “Hearing this from my university’s president made me feel uncomfortable expressing my opinions and values on campus.”

Additionally, Knowles tweeted on Mar. 30 that Farley “did not cite any evidence for his defamatory claims because none exists.” He also wrote that he’d be willing to discuss any examples of “hate and misinformation” of which Farley believes if he wants to cite them.

In a statement provided to Campus Reform by the Foundation for Individual Rights in Education (FIRE), Senior Program Officer Zach Greenberg emphasized the importance of freedom of expression and the ability to engage with diverse viewpoints.

“We're glad to see Washburn University allow this event to proceed despite its disagreement with the speaker's viewpoints," Greenberg said. "Hosting politically diverse speakers on campus fosters the free exchange of ideas and provides students excellent opportunities to engage with opposing viewpoints.”

Patrick Early, the university's director of public relations, told Campus Reform that Farley's email “was an internal message and we are not going to comment further on it.”

Campus Reform reached out to YAF, Michael Knowles, and President Farley for comment; this article will be updated accordingly.