Few people showed up to the anti-Pence protest at UVA

A handful of protesters gathered outside of Old Cabell Hall Auditorium at University of Virginia to protest Vice President Mike Pence.

One protester told Campus Reform that Pence should not have ben given a platform to speak on campus.

After a month of anticipation leading up to Mike Pence's appearance at the Charlottesville campus on Apr. 12, only a handful of protesters showed up to counter the former Vice President.

Campus Reform was on the ground to cover the scene.

Pence was slated to take the stage at 7 PM, and protesters began to congregate on the hillside outside of Old Cabell Hall Auditorium about an hour prior to the event.

"People do wanna hear a difference of opinions, but I'm not sure a college campus is necessarily the best place for introducing those opinions," one protester told Campus Reform.

One protester told Campus Reform that there was not a centralized protest and that the groups all came separately. However, the groups had one thing in common: Pence’s rhetoric should not be allowed on campus.

“He should be booed off the stage,” one protester told Campus Reform.

Another student told Campus Reform that different opinions should be shared within the classroom, or in another “controlled environment” where speech can be monitored by a professor.

“This seems quite biased opinion, so maybe students can learn these opinions from people who can present them in a more unbiased fashion,” she reasoned. “There’s more so a question with the event being held in the first place and whether this is the right forum for it.”

Her belief was shared by her co-participant, with the other student sharing that it is “unfair” that Pence was given a platform to share “those hateful beliefs.”

“The fact that Mike Pence has been allowed to speak here… just allowing someone who has been notoriously hateful and notoriously worked against groups that lived in the student body like ourselves, who are LGBT, and worked to discriminate against those students… we don’t think its fair,” she said.

Protesters scattered to cover the hillside across from the venue but remained quiet. Most sat silently with signs and left before the event had concluded.

The paper accused Pence of having “long opposed marriage equality and transgender student protections” but did not cite legislation beyond 2015. Throughout the event, protesters had difficulty recalling legislation passed or endorsed by Pence that was in line with their accusations of homophobia. 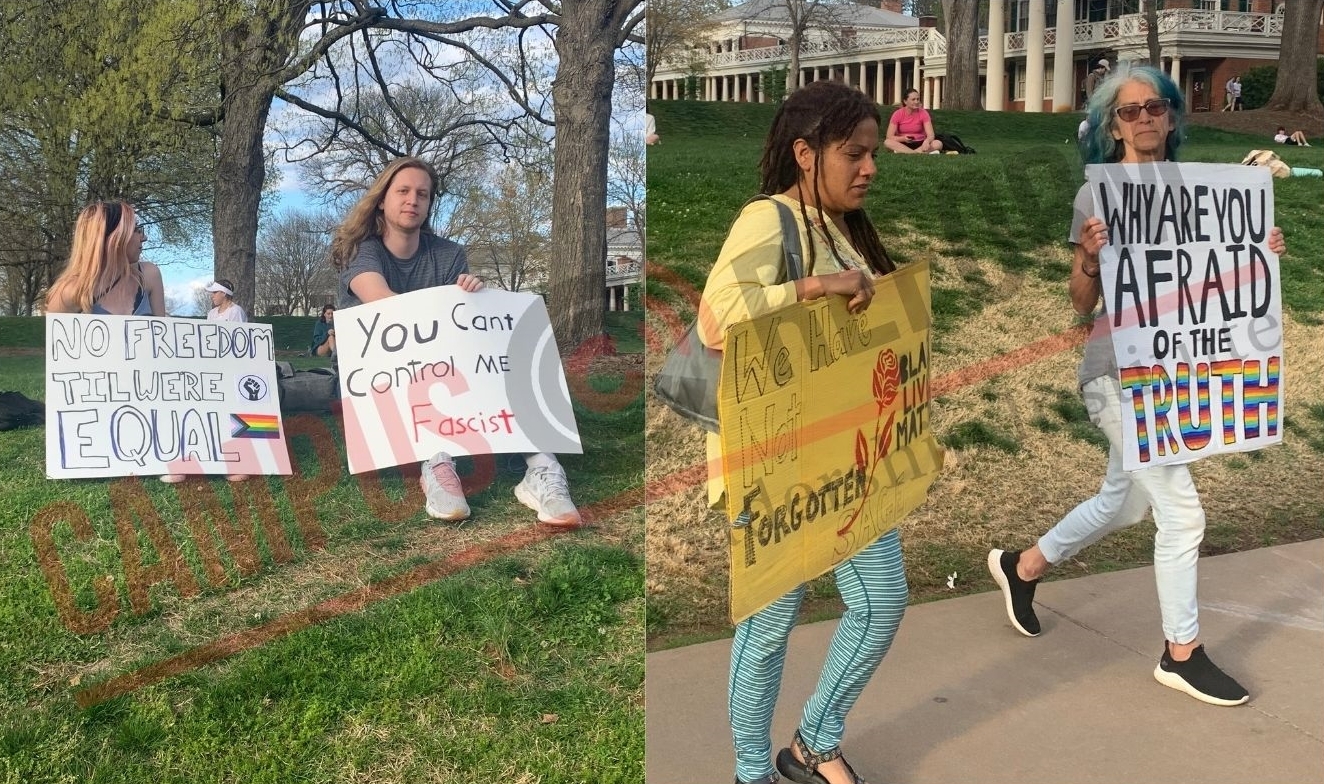 "I don't know any specific ones that he had his hand in that I can recall, that I want to comment on," one community member said.

Another member deflected as well, reminding Campus Reform, “He was the Vice President of the United States under Trump and Trump’s running mate, so you can probably look at any single thing Trump said during four years in office that he didn’t specifically object to and use that.”

Protesters also expressed their disillusion by holding handmade signs mainly targeting Pence’s alleged stance on LGBTQ+ issues. Such signs read "No freedom til we're equal" and included an image of the LGBTQ+ flag as well as the BLM fist, while another read "Free to be LGBTQ+."

Another sign bluntly read "You can't control me fascist," while another, mostly held up in front of the line of attendees, asked, "Why are you afraid of the truth." The word "truth" was decorated in rainbow coloring.

"Black Lives Matter," "Wake Up," and "Woke Leftist" were also signs sporadically held throughout the group.

The speech made national headlines after the student newspaper, The Cavalier Daily, came under fire for publishing an opinion piece that asked for Pence’s invitation to be rescinded. As such, students were on high alert for media presence throughout campus.

Multiple organizations banded together to organize counter-events separate from an in-person protest, while other frustrated students took to silent measures to express disagreement with Pence’s presence.

Chalk was a large target of expression for both sides of the aisle.

Per Campus Reform photos, “Love is love” was sprawled across campus next to the original advertisement, while other forms of protest included drawing cartoon flies on top of Pence’s name. One anti-Pence message tagged the phrase “is a misogynist nitwit” to the original message.

Other Pence chalking was erased or attempted to be wiped off the concrete.

Additionally, a satirical news article was distributed across campus poking fun at the former Vice President’s arrival. According to the fake article Pence arrived at UVA to  “Obliterate [the] Greatest Threat to Democracy: Liberal College Students” and was summoned by YAF members by casting the Dark Mark from Harry Potter.

A list of fake topics was also listed on the flyer, joking that Pence’s speech would include a “Moment of silence for Derek Chauvin,” a “Cathartic crying session on the topic of white oppression,” and talks on “Anti-Abortion” and “Anti-childhood welfare.”

Separate events were also planned and hosted by left-leaning student organizations to give upset students a place to gather on campus away from the venue.

UVA Young Democrat Socialists of America, alongside the Queer Student Union and PLUMAS, held an off-campus “Solidarity Forever Festival” where students could “reclaim [their] power a community” through open mic sessions, a teach in, and live music.

“Recent events on Grounds have shown us, once again, the University is interested in serving and protecting those who have a proven track record of bringing harm onto marginalized communities and their allies,” the event poster said. “We invite students, faculty, and Charlottesville community members to join us as we look at creating a space where we can learn, express ourselves, and most importantly stand alongside one another in solidarity.”

Silent protesting will continue throughout the week. On Apr. 13, The Platypus Affiliated Society hosts a panel event titled “Defense against Pence?” to respond to “the right-wing rhetoric of Vice President Mike Pence.”

The panel will consist of three university professors to “present and represent various political factions” and “critique and consider Pence’s arguments from different perspectives.”

The event advertisement also came with a clear call to action for UVA students: do not protest Pence’s speech. Addressed to “ladies and gentlemen, brothers and sisters, associates, comrades, and friends” the community was warned of being under the “national spotlight” and to not cave to disruptive behavior.

“Screaming and yelling at the speaker is obviously not the right way to answer, but intellectual discussion is a necessary response against controversial speakers,” the advertisement argued.

The society implored UVA community to “not let us be worse than Stanford,” whose campus recently erupted in chaos over a Pence visit on Feb. 17.

Campus Reform contacted every organization and individual mentioned in this article for comment and will update accordingly.