Did the Princeton BDS referendum get a majority? There's controversy about the vote count.

According to results obtained by Campus Reform, 44% of students voted to pass the Israel Boycott, Divestment, and Sanctions referendum, 40% voted to reject it, and 16% abstained.

According to Appendix D of the USG Senate Constitution, the definition of 'Majority Vote' specifically excludes 'blanks or abstentions.'

Princeton University’s Undergraduate Student Government (USG) voted to approve a Mar. 27 referendum aligned with Boycott Divestment and Sanctions (BDS) initiatives with the hopes that the school will boycott the construction machinery company Caterpillar for its affiliation with Israel.

After the referendum was approved, it received the necessary signatures to be put on the ballot for Princeton undergraduate students to vote on. According to results obtained by Campus Reform, 44% of students voted to pass the referendum, 40% voted to reject it, and 16% abstained.

Since the USG Senate Constitution stipulates that a referendum can only pass if “a majority of the votes cast in the referendum are in the affirmative,” the results would result in defeat for the proposal if abstention ballots count in the voting total.

However, therein lies the procedural controversy surrounding the referendum.

According to Appendix D of the USG Senate Constitution, the definition of “Majority Vote” specifically excludes “blanks or abstentions.”

Campus Reform obtained photographs of a text conversation between Princeton Sophomore Jared Stone and the USG Chief Elections Manager Brian Li, who appeared to affirm that abstentions would count towards the vote count, before backtracking on his comments three hours before the vote closed. 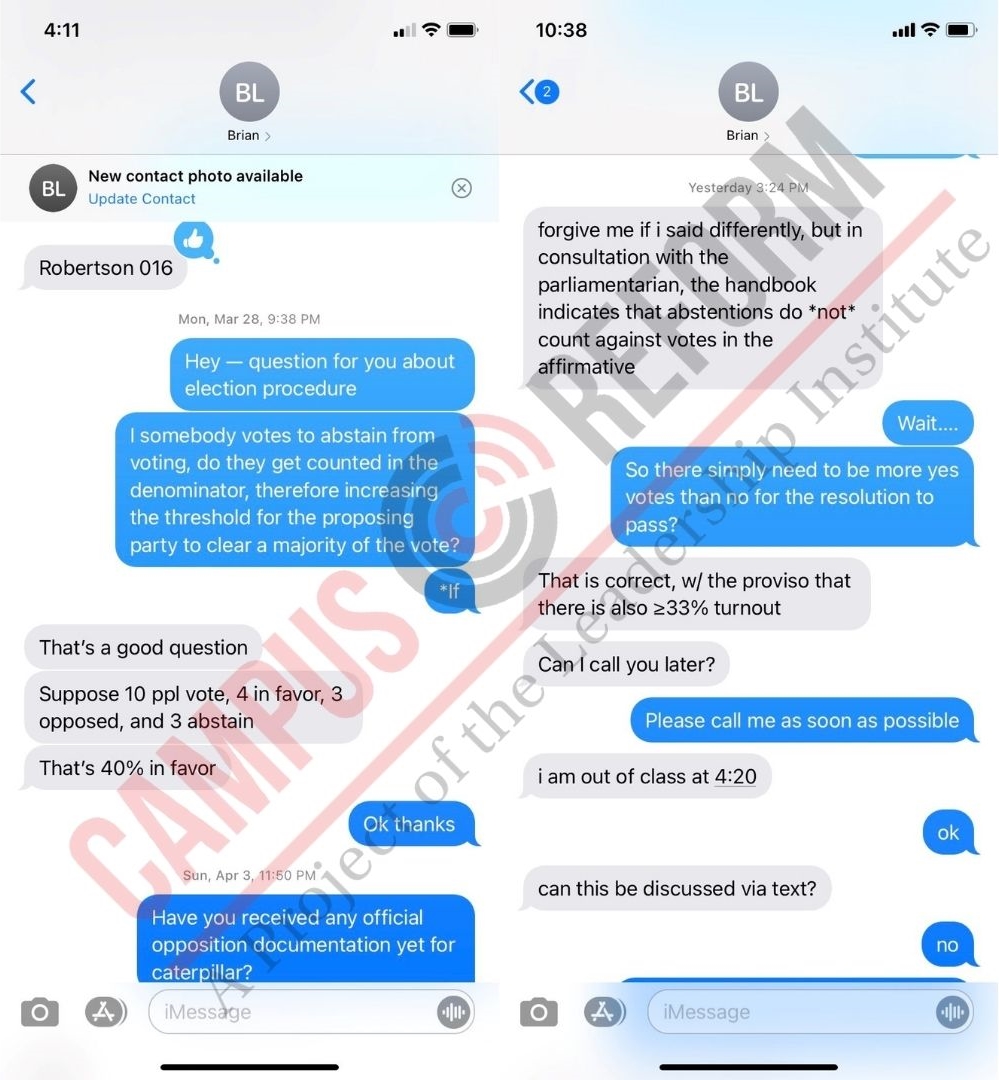 Stone is President of Tigers for Israel, a leading pro-Israel organization at the school, and led the on-campus campaign against the referendum. He told Campus Reform that his conversation with Li on Mar. 28, “at the onset of the entire campaign season” had a major impact on the pro-Israel campaign as “that was an understanding throughout the entire campaign.”

“We were fed false and misleading information throughout by representatives of the USG Senate that caused us to campaign in a manner that would have likely been different had we received different information from them,” Stone said.

Brian Li has not responded to Campus Reform's request for comment.

“A victory for the BDS campaign, would in many ways, stimulate and create a snowball effect for further BDS referenda at other college campuses and the subsequent rise of anti-Semitism that occurs and their aftermath," Stone concluded.

CEO of Israel on Campus Coalition Jacob Baime released a statement about the referendum obtained by Campus Reform and proclaimed that "the Undergraduate Student Government tried to change the rules of the game that all sides understood from the beginning. The anti-Israel referendum did not win the support of a majority of voting students and therefore it did not pass."

He continued, "This entire episode has contributed to a climate of hostility and fear for Jewish and pro-Israel students."

The call to boycott Caterpillar for its affiliation to Israel is part of a wider trend of BDS initiatives that attempt to “demonize Israel in the eyes of future policymakers across academic centers throughout the world,” Princeton freshman Alexandra Orbuch told Campus Reform.

“As a Jewish student and the granddaughter of four Holocaust survivors, I see the State of Israel my ancestral homeland and a refuge for the Jewish people against those who seek to harm us,” she said. “There can be no doubt about the fact that BDS aims to wipe the only Jewish state off the map.”

[RELATED: POLL: 50% of Jewish students feel they 'need to hide their identity' on campus]

The Academic Engagement Network (AEN) sent a letter imploring university President Christopher Eisgruber to reject the referendum, noting that “BDS creates divisions and polarizes the campus” and cited research that “shows that pro-BDS student activism leads to a marked increase in antisemitic incidents and bias reporting on campus.”

Executive Director of AEN Miriam F. Elman told Campus Reform that the timing of holding this referendum as the Jewish community on campus prepared for Passover was “completely obnoxious and disrespectful.”

She explained that the referendum “doesn’t follow procedure for divestment” and that the university president wouldn’t be able to implement the changes even if it passed.

“They know that it's not going to be implemented,” she said. “But their goal is to get the campus to obsess about Israel's alleged wrongdoings 24/7 for like a two-week period. That's the ultimate goal. So even if this doesn't pass, they still win.”

Elman was previously harassed as a professor at Syracuse University for her pro-Israel stance as a Jewish woman, along with Jewish students at the school who received death threats for sharing their views.

She has witnessed an on-campus culture of “obsessive, unhinged hostility towards the Jewish state, and Zionism” which she describes as “the self determination of the Jewish people” and noted that there exists an “unwillingness to tolerate self-determination for Jews, where you endorse it for every other people on the planet.”

The referendum brought to the student senate by president of the Princeton Committee on Palestine (PCP) Eric Periman claimed Caterpillar machinery is used for “violent, inhumane, and despicable purposes” in the Israel-Palestine conflict.

The PCP additionally hosted an Apr. 6 Caterpillar Referendum Teach-In” justifying the referendum, attended by Alexandra Oburch, who told Campus Reform, “The claim that ‘Zionism is racism’ was trotted out along with ‘From The River To The Sea,’ the rallying cry of Hamas and other organizations, calling for Israel’s destruction.”

“The malign tenor of the meeting validated my fears about PCP," Oburch said.

In an op-ed for The Princeton Tory, Oburch wrote, “As a Jew, I was appalled. Appalled by the false claims,” which included the claim that Israel is an apartheid state and that Israel is dependent on “ethnic cleansing,” but Oburch especially took issue with the claim that “suicide bombings in Israel ceased in 2003.”

“Such a claim is blatantly false,” she told Campus Reform. “In 2004 alone, 283 Israelis were injured from suicide-bombing attacks, and the violence has been ongoing ever since.”

Similar campaigns are prevalent on college campuses, with the Students for Justice in Palestine (SJP) chapter at Tufts University recently creating a Boycott Sanction and Divestment campaign and pledge against Jewish organizations on campus.

The SJP chapter at the University of Chicago further campaigned that students “DON’T TAKE SH*TTY ZIONIST CLASSES” the day before holocaust remembrance day, calling on peers to boycott any classes “on Israel or those taught by Israeli fellows.”

Campus Reform reached out to Princeton University, and Chief Elections Manager Brian Li for comment. This article will be updated accordingly.

Leana Dippie is a senior at the University of Florida on the pre-law track and she is working towards a bachelor's degree in political science with a minor in English. Leana is involved in various pre-law organizations and holds leadership positions at off-campus organizations such as the James Madison Institute.