The removal continues a theme of anti-Israel activism plaguing Duke’s campus during the 2021-2022 academic year.

On May 19, Duke University posted a series of pictures to its Instagram account showcasing Duke students on a Birthright trip to Israel. 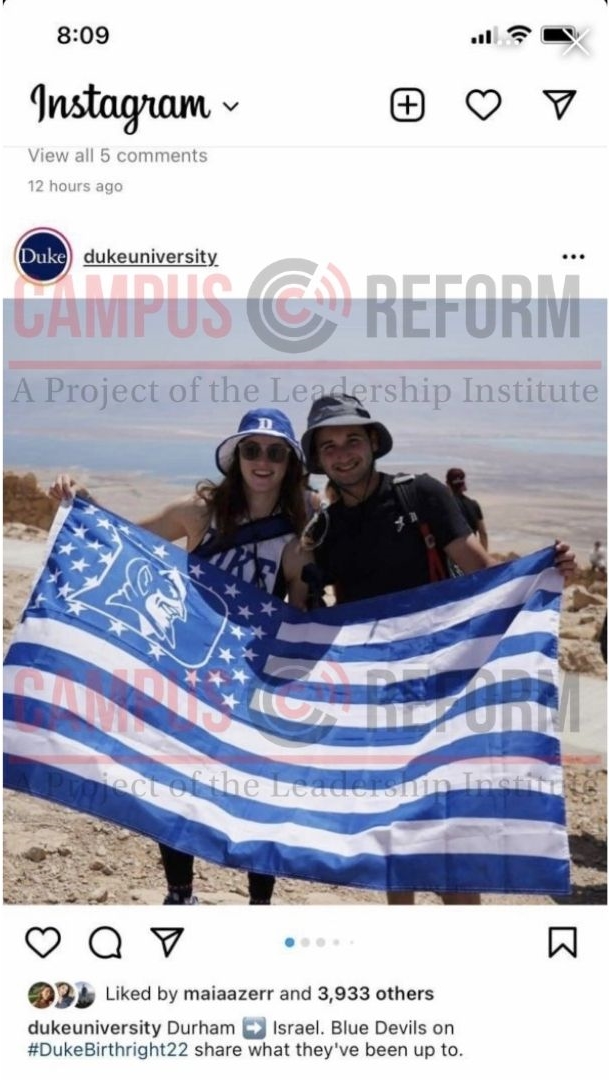 Birthright provides free 10-day trips to Israel offered to Jews between the ages of 18 and 26.

Campus Reform obtained a screenshot of the now deleted post.

Olympian and Duke alumnus Ibtihaj Muhammad responded to the post with a Palestinian flag emoji, stoking a debate in the comment section.

Muhammad is famous for being the first American Olympian to wear a hijab. 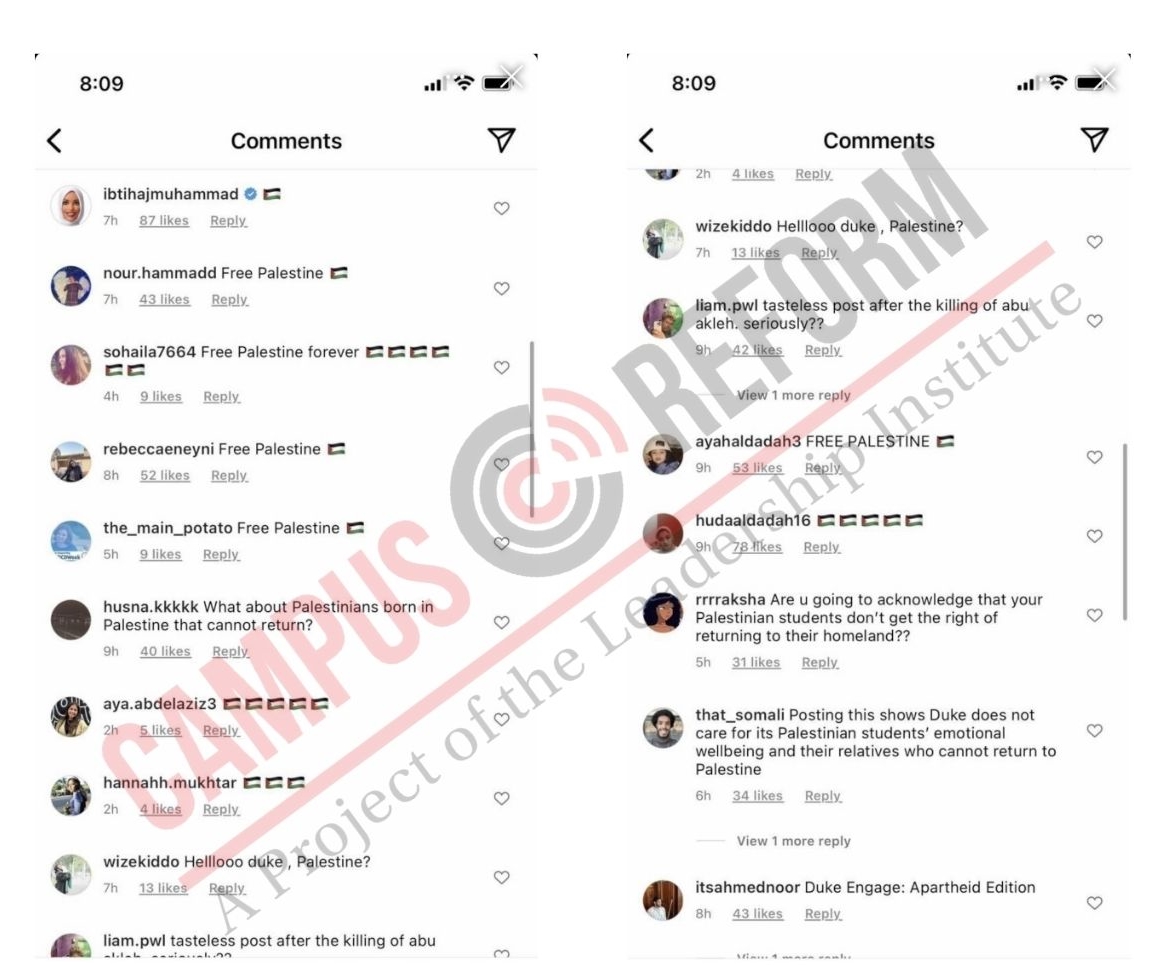 Muhammad complained in her book Proud: My Fight for an Unlikely American Dream that Duke is “overwhelmingly white” and filled with “microaggressions”, according to the university newspaper The Chronicle.

Other commenters responded with a flurry of messages ranging from “Free Palestine” to “Helllooo duke , Palestine?”

[Related: ‘Jewish students are fighting anti-Semitism at this university’]

One user accused Duke of “not car[ing] for its Palestinian students’ emotional wellbeing and their relatives who cannot return to Palestine”, while another characterized the birthright trip as “Duke Engage: Apartheid Edition,” referencing a prominent summer service-learning program.

Within 24 hours the outcry led Duke University to remove the post.

This is just one of many cases during the 2021-2022 Academic Year where Duke has come under fire for actions hostile to pro-Israel students and organizations.

As Campus Reform reported in November, the president of Duke Student Government vetoed approval for the establishment of a chapter of Students Supporting Israel (SSI).

After widespread backlash, SSI was quietly re-approved in February.

The re-approval came after anti-Semitism training, a resolution condemning anti-Semitism, and the student government's adoption of the International Holocaust Remembrance Alliance (IHRA) working definition of anti-Semitism. 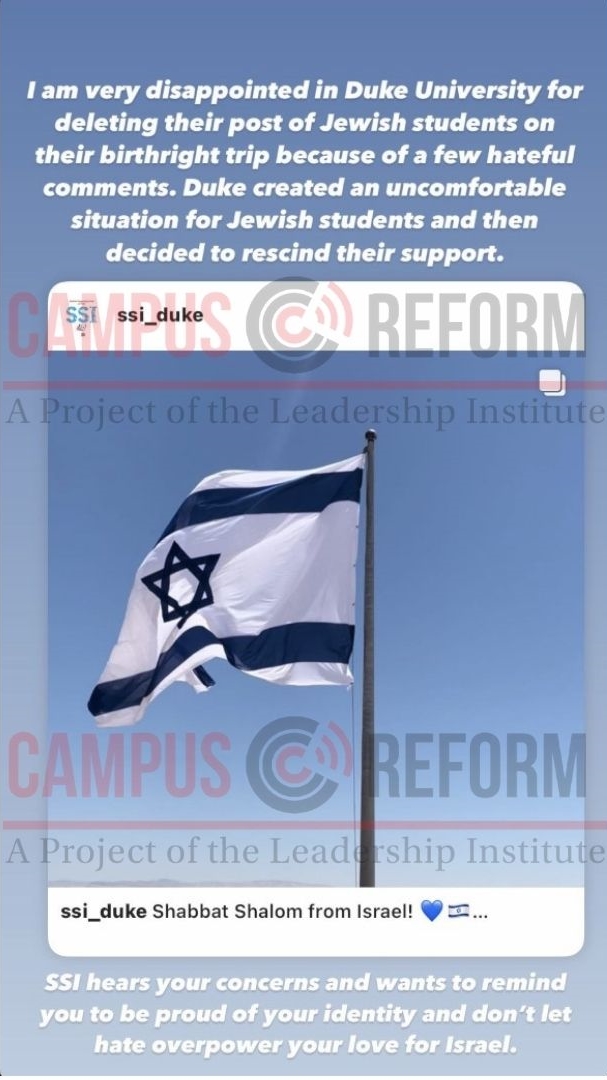 Alanna Peykar, president of Duke SSI, expressed “disappointment” at the removal of the Birthright post on its Instagram.

Campus Reform reached out to Duke Students for Justice in Palestine, Duke Students Supporting Israel, Duke University, and Ibtihaj Muhammad for comment. This article will be updated accordingly. 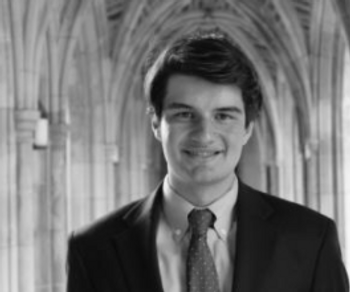