VIDEO: Cornell grad says he was assaulted for defending Uyghurs

Kinen Kao, a ‘22 Cornell graduate and advocate for democracy in Hong Kong, was allegedly assaulted for his views in downtown Ithaca.

Kao’s activism on behalf of Hongkongers and Ughyers has been disrupted in the past.

Kinen Kao, a 2022 Cornell graduate and advocate for democracy in Hong Kong, was allegedly assaulted on June 8 while putting up ‘Free Hong Kong’ and ‘Free Uyghurs’ posters in downtown Ithaca, New York.

Kao posted footage of the attack on the Society for the Promotion of East Asian Liberty’s Instagram account. 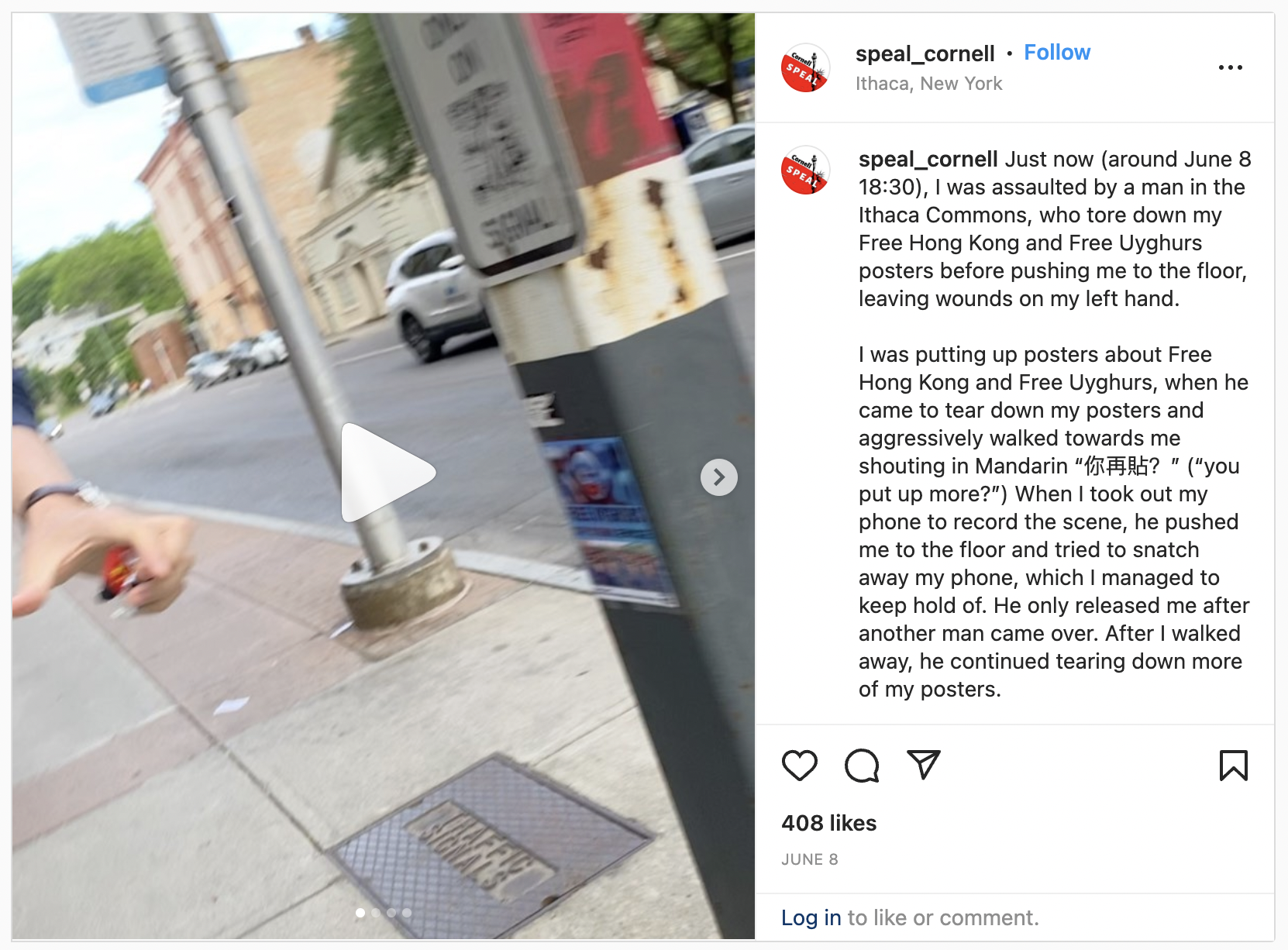 In the post, Kao asserts that the attacker “tore down my Free Hong Kong and Free Uyghurs posters before pushing me to the floor, leaving wounds on my left hand.”

His assailant “aggressively walked towards me shouting in Mandarin “你再貼？” (“you put up more?”)”, according to Kao. He also claimed that the attacker tried and failed to take his phone, and only let go of him once others got involved.

Kao told Campus Reform that he has been verbally confronted at least twice while putting up the posters on campus, but that this was the first time he was physically assaulted.

“Their actions against me will not only never stop me, instead they are fuelling my ambition to continue putting up more posters," he said.

No stranger to pushback, Kao has been a vocal activist for Hong Kong's independence and against the predations of the Chinese Communist Party during his time at Cornell.

“Kao’s posters have been repeatedly vandalized, sometimes being painted over and some have even been burned," The Cornell Review reports.

"I will fight on until the day my lifetime dream comes true, when we liberate Hong Kong, and when I get to triumphantly return to my hometown”, Kao told Campus Reform.

[RELATED: ‘Indiana University students enraged after Hong Kong protestor is invited to speak’]
He went on to say that “[f]ree speech on college campuses is under a huge threat posed by totalitarian regimes, especially the Chinese Communist Party, which aims to use its power and money to suppress dissent against them even abroad.”

Kao concluded by asserting that incidents like those he was involved with demonstrate the far reach of CCP suppression of speech, and that universities are complicit with that suppression on their campuses.

The organization Student’s for Hong Kong, along with multiple others, made a similar point about the lack of free speech on campus in a joint statement about the incident involving Kao.

“We should be free of fear when speaking up on university campuses, and especially so in the United States, where freedom of speech is considered a basic civil right and social value, and is also enshrined in the US Constitution”, the statement read.

Campus Reform has reached out to Cornell University, SPEAL, The Cornell Review, Students for Hong Kong, and Kinen Kao (through the SPEAL Instagram account)