The 'Our Bodies, Our Sports' rally was held at Freedom Plaza on the 50-year anniversary of Title IX to defend fairness in women's sports.

Protesters stood on the outskirts of the scene to drown out the speakers, but did not succeed in shutting down the event.

A battle of the sexes erupted outside the White House Thursday morning as activists clashed over anticipated Title IX revisions and the state of women's sports.

The Our Bodies, Our Sports rally was held at Freedom Plaza on the 50-year anniversary of Title IX to defend fairness in women's sports.

The rally was countered by a parade of left-wing activists who continuously accused the event of being hosted by "far-right hate groups that oppose transgender students participating in sports," according to a flyer obtained by Campus Reform.

Though protesters paraded around the square banging drums, blowing kazoos and whistles, and waving transgender and Antifa flags, the event was not disturbed.

Numerous student-athletes spoke on the stage about their first-hand experience competing against male athletes who identify as women and testified to the unfair environment it creates.

"I am supporting the protection of Title IX because I was forced to compete against biological males throughout all four years of high school, and every single time I raced against these athletes I lost," former track and field athlete Selina Soule told Campus Reform.

"I just want to make sure that no one has to go through that pain and heartbreak that I went through and ensure that every little girl gets not only the chance to participate, but to succeed in their sports," she continued.

Soule lost a qualifying position during the 2019 Connecticut Indoor Track & Field State Championships and a slot in the New England Regional Championships after two male athletes, who identified as transgender, were permitted to compete.

"I knew that I needed to speak about this issue, because at the time no one was speaking on it," she said. "I knew that I had to be the first voice and to bring awareness to this issue." 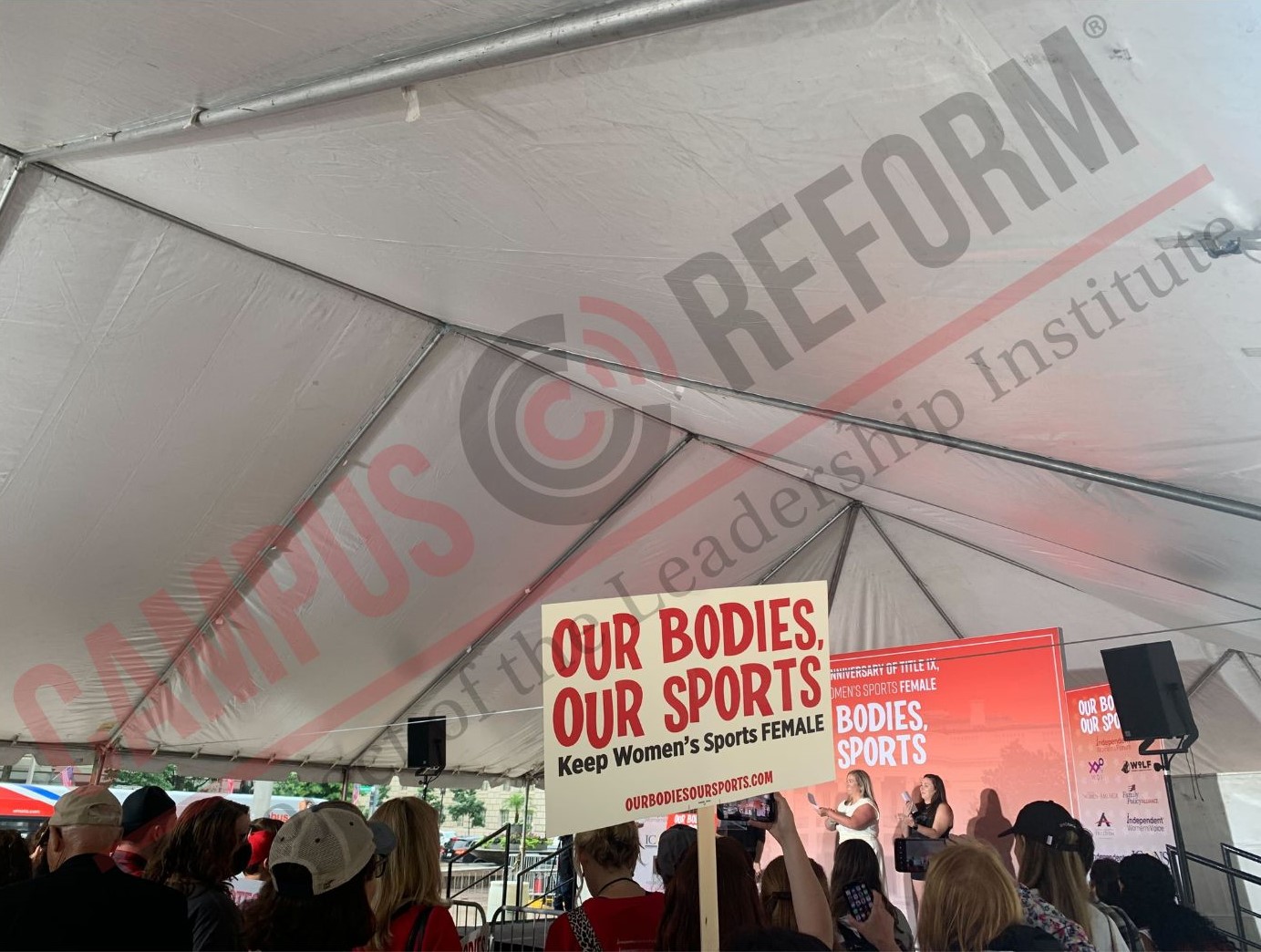 The prevalence of male athletes in women's sports intensified this past academic year after transgender swimmer Lia Thomas was deemed eligible to compete in the 2022 NCAA Division I Women's Swimming Championships. Thomas took home a national title and became an All-American swimmer in three events.

Riley Gaines, who tied Thomas in the 200-yard freestyle at the Georgia Tech meet, told Campus Reform that men competing in women's sports impacts more than just the athletes in the competition.

"If you're a grandparent, think of your grandchildren. Think of your children, think of your neighbor," she implored. "It's not just the people with experiences this is affecting, it's everyone."

"I just want people to realize that this is the majority here," she continued, "not the half a percent of the population that is transgender."

On Sunday, the International Swimming Federation ruled it would ban men from competing in women's divisions at elite competitions if the swimmer experienced male puberty.

Gaines states that the decision is a good start, but there is still more work to be done to protect female athletes at the lower levels.

"FINA has actually prioritized competitive fairness, women's sports, which is more than any other large governing body has done at this point," she said. "We just kind of need other organizations like the NCAA or the IOC or USA Swimming and organizations across other sports to comply, as well."

"Whenever we come together, we're stronger in a group. We all have the same goal of creating fairness in women's sports, and so being here today and using our voices together and getting change is the goal," she said.

In March, Campus Reform reported on a letter sent to the NCAA by members of the 2008 University of Arizona Women's Swimming and Diving team that questioned: "Do we have a voice?."

Former University of Arizona swimmer and co-founder of the Independent Council of Women's Sports Marshi Smith told Campus Reform that she and her teammates intend to "create a united front to fight for fairness, for women in sports" and to "celebrate 50 years of Title IX."

"Hopefully, people are encouraged to know that there is a strong support group for the voices that were silenced over the past year," she said. "Know that we have a team here, ready to embrace you moving forward, ensuring the future for all the present and future athletes to come."

The rally was sponsored by both liberal and conservative organizations, including Independent Women's Network, Women's Liberation Front, and Concerned Women for America.

Save Women's Sports, Family Research Council, and the National Federation of Republican Women were also listed among a total of 18 sponsors. In total, 40 speakers crossed the stage including athletes, activists, and politicians.

Former U.S. Representative Tulsi Gabbard was one of the Democratic attendees included in the event.

Campus Reform contacted the listed sponsors and the Department of Education for comment. This article will be updated accordingly.