ELLWANGER: I am a professor still paying back student loans. Biden’s plan does not work.

After finishing my undergraduate degree, I borrowed about $90,000 to fund my graduate degrees. Today, I’m a 44-year-old full professor at a large public university, and still paying my student loans back.

Adam Ellwanger is a professor of English at the University of Houston - Downtown. His primary areas of expertise are rhetoric and critical theory. He writes political and cultural commentary for outlets like Human Events, Quillette, American Greatness, The American Conservative, New Discourses, Minding the Campus, and many more.

Last month, the Biden administration announced that the federal government would “forgive” up to $10,000 worth of student loan debt for those making under $125,000, and up to $20,000 for Pell Grant recipients.

Most professors are cheering this legally-questionable decision. Not me, though. There are many reasons to condemn this action. Foremost among them is that the only entities who significantly benefit from this loan forgiveness are upper-middle class borrowers and universities.

While it’s true that lower-income debtors will reap some small benefit from having $10,000 or more wiped from their bill, the lower class is considerably underrepresented among college graduates. And those from lower-income families who do complete a degree generally have far more debt than $10,000.

Waiving such a small amount won’t really make a dent.

In contrast, the wealthy can pay the exorbitant tuition costs out of pocket. Graduates from the middle-class could likely pay their debt eventually without the forgiveness, and this is even more true of the upper-middle class. They reap the greatest benefit from Biden’s decision.

[RELATED: GIORDANO: In President Biden’s America, those that do the right thing get punished]

I was born to a working-class family in western New York. My father ran an appliance parts business, and my mom worked at a small-town library. As a child, my parents gave me great intellectual support at home, and they aggressively saved money so that I could attend college. They didn’t want me to have to take on debt to study.

After finishing my undergraduate degree in 2000, I borrowed about $90,000 to fund my pursuit of a master’s degree and a doctorate. Today, I’m a 44-year-old full professor at a large public university, and still paying my student loans back.

Pressed about how this plan to cancel student loan debt will be funded, the White House refuses to answer. The truth, of course, is that taxpayers will cover the cost. In the past, banks were the originators for the overwhelming majority of student loans. During the Obama administration, changes were made that meant the government itself was the lender.

Adding insult to injury, the Biden administration hasn’t put forward any proposal that would control or reduce the rising cost of college, which is the primary reason for the exorbitant loan debt. Once the government became a direct lender, universities had no more reason to control tuition rates.

The government’s new policy of loan “forgiveness” signals to universities that they can keep raising tuition because the state will bail students out. Expect school to get more expensive, then – not less.

All of this is to say nothing of the unfairness of Biden’s decision.

What about people who chose not to go to college after high school, precisely because they didn’t want the debt? Would they have taken a different route in life if they had known their debt would be forgiven? What about people like my parents, who aggressively saved and sacrificed so that their children wouldn’t have to borrow money? This mocks their sacrifices and disincentivizes today’s parents from similar economic prudence.

What about the people who borrowed money for college and worked hard over decades until all the money was paid? As Elizabeth Warren clarified, they shouldn’t hold their breath for a $10,000 reimbursement.

[RELATED: OP-ED: The fate of critique in the fight against Critical Race Theory]

In short, Biden’s loan forgiveness isn’t just legally questionable, it is ethically indefensible. It amounts to a crude transfer of wealth from typical Americans to universities and the affluent. Further, this decision – which comes when a president with abysmal approval ratings is approaching what looks to be a very nasty midterm election – seems to be at least partly politically motivated. If the courts don’t step in, I’d expect another round of “forgiven” loans sometime in the summer of 2024, right before the presidential election.

My 10-year-old son is a budding guitarist who loves rock music. But he can be a handful at school. In an attempt to coerce good behavior as the new school year began, I promised to take him to the Goo Goo Dolls concert in our hometown of Houston – if he could make it through the first two weeks without any misbehavior at school.

Much to my relief, he did it! At the end of August, we went to the show.

At the concert, as lead singer Johnny Rzeznik prepared to play their 1995 hit “Name,” he told the crowd a story. He shared his memories of getting substantial checks in the mail as the single gained steam – the first time the band had made any real money from music. As he watched the cash roll in, he recalled that he had significant debt – particularly student loan debt from his one year at Buffalo State College (not far from where I grew up).

It makes sense that loans were on Rzeznik’s mind in light of Biden’s decision. Given that his loans were taken out decades ago, the debt couldn’t have been more than a few thousand dollars. Nevertheless, Rzeznik – at the time a newly-minted millionaire – decided he simply wouldn’t repay the loans. This was his privilege as a new member of the upper class: no unpaid debt of $5,000 was going to dent the credit of a millionaire.

Before he launched into the song, Rzeznik implored the audience to refuse to pay their loans, too. After all – they can’t punish everyone. Right?

The audience let out an enormous cheer, eager for the forgiveness of their debt. As far as I could tell, I was the only one who voiced any disapproval. Embarrassed of his old man – a professor of 15 years – my son leaned over to admonish me: “Dad, don’t boo the rock star.”

I hope he’ll forgive me. 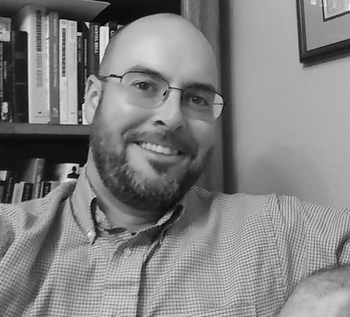 Adam Ellwanger is professor of English at the University of Houston - Downtown. His primary areas of expertise are rhetoric and critical theory. He writes political and cultural commentary for outlets like Human Events, Quillette, American Greatness, The American Conservative, New Discourses, Minding the Campus, and many more.