The University of Massachusetts Dartmouth recently requested $357,400 to fulfill a public records request submitted by Campus Reform in late September.

Campus Reform analysis reveals that the cost of the request is enough to cover college expenses for several students and is more than 5 times the yearly salary of the average Massachusettsan.

The request sought communication records between just two individuals over the course of 7 months.

“[R]ecords should include email communications from Lori Hendricks, the Director, and Greg Homol, the Fitness Center Director between January 1, 2022 and August 1, 2022,” the request specified.

Ryan Merrill, Director of Strategic Communications and Media Relations at UMass Dartmouth, wrote that the search would take “14,300 hours,” totaling $357,400.

Ken Tashjy, a Campus Reform Higher Education Fellow and lawyer familiar with Massachusetts public record law, calculated that if "UMASS searched and compiled records for 8 hours a day, it would take 1,787.50 days to reach 14,300 hours, or 4.89 years.”

“The fact that UMASS claims it will take an estimated 14,300 hours at a cost of $357,400 to ‘search and compile’ records of the electronic communications between two individuals over a 7 month period is laughable and absurd,” Tashjy said.

Campus Reform analysis also reveals that the estimated hours to fulfill the request would not just take years, but that the fee is enough to cover college expenses for several students and is more than 5 times the yearly salary of the average Massachusettsan. 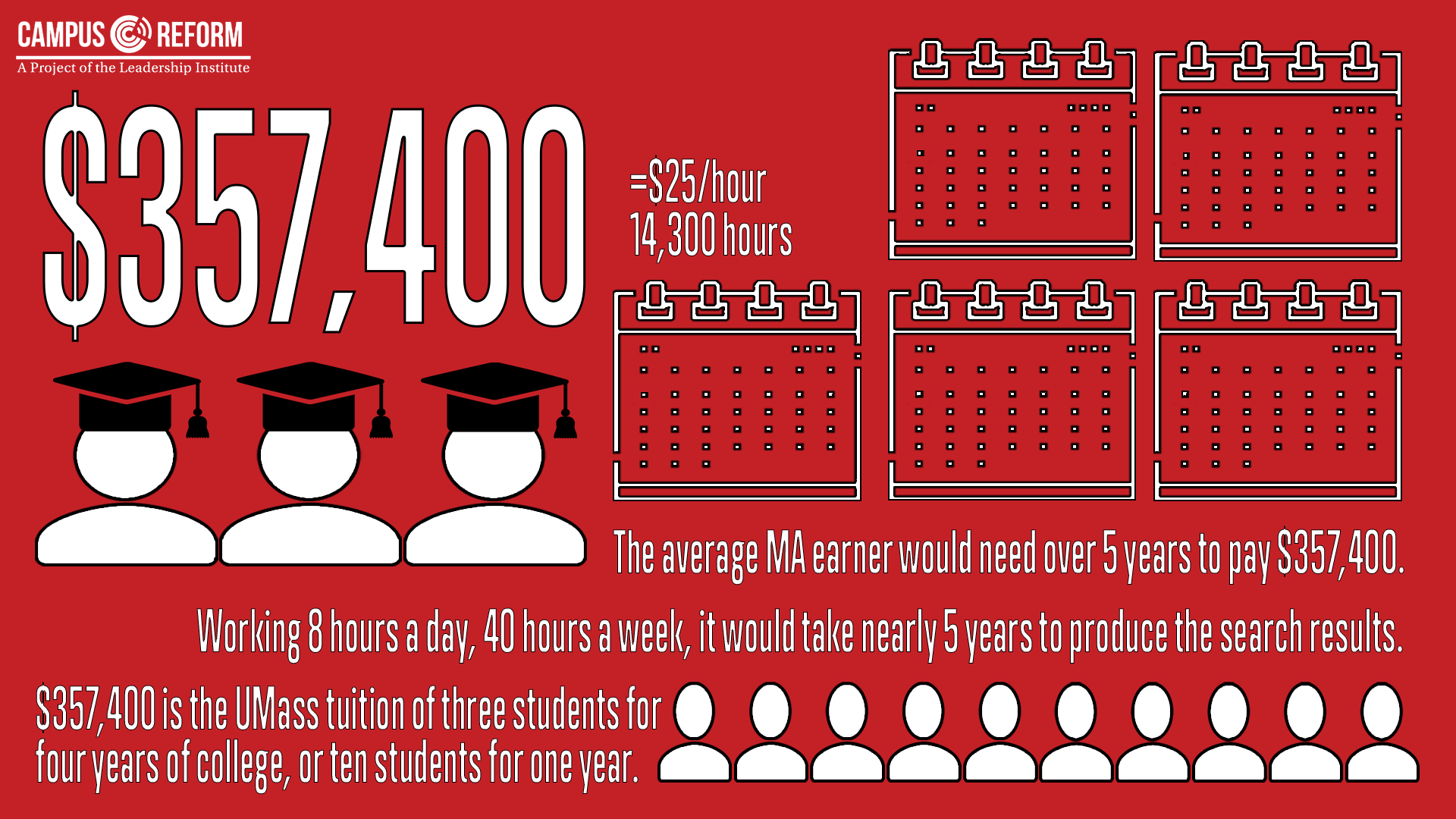 UMass Dartmouth tuition is $34,001 per year for all in-state undergraduate students, according to its website. Consequently, Campus Reform is being charged the equivalent of sending nearly three students to college from freshman year to graduation.

Or, alternatively, Campus Reform could cover the first-year cost for more than 10 students at the amount of $357,400.

The average person in Massachusetts earns $65,505 per year, according to ZipRecruiter. If the average Massachusettsan had no other expenses, it would take more than 5 years for them to pay for the request.

Campus Reform contacted Merrill, expressing the absurdity of the fee. He responded saying, “It’s one of the largest [records] requests [he has] ever seen,” and suggested that the request be amended.

In pursuit of working with the UMass Dartmouth office, Campus Reform refined the language of the initial request, and sent the updated language on October 20.

The refined language, sent in an email to Merrill, read, “All emails BY/FROM and BETWEEN Lori Hendricks, the Director, and Greg Homol, the Fitness Center Director between January 1, 2022 and August 1, 2022.”

Despite refining the language, UMass estimated that the search would cost “$14,200,” arguing that searching and compiling the records would now take “572 hours.”

Tashjy commented on the update, stating that the cost is still “unreasonable… [g]iven that the records are all electronically stored and could be easily identified using basic search parameters (names and dates).”

Campus Reform contacted the Massachusetts Department of Education for clarification on who is held accountable for setting prices and estimates of public records. Their office passed Campus Reform onto the Secretary of the Commonwealth of Massachusetts.

The Secretary's office, however, stated that agencies can charge up to “$25 per hour” to produce a request, and simply said that an appeal could be filed with the Supervisor of Public Records, who will alone “review the fee estimate and issue a determination.”

Such responses and high figures raise concerns that agency and department heads in the state of Massachusetts lack accountability and are seeking to evade their public duty.

“Those fees do seem excessive and more of an intentional financial obstacle to avoid their legal obligation of transparency to the public,” he wrote.

Campus Reform contacted all parties involved and this is ongoing story. This article will be updated accordingly.

Jared Gould serves as News Editor at Campus Reform. Prior to joining our team, Jared worked with former Governor Phil Bryant at Bryant Songy Snell Global Partners, a private government relations and business consulting firm in Ridgeland, Mississippi. He also previously worked in the Office of Governor Phil Bryant and The Faith & Politics Institute in Washington, D.C. He is a graduate of the University of Southern Mississippi.