Campus Reform obtained an email which encourages students to disrupt the event.

Cornell University students are preparing to protest conservative pundit Ann Coulter prior to tonight’s speech, an email and pictures of flyers obtained by Campus Reform show.

The protest will be held at 5:00 PM outside of Landis Auditorium at the Law School, the Gender Justice Advocacy Coalition at Cornell advertised. The group urged readers to “show solidarity and stand up for those [Coulter] frequently calls violence against.”

“As members of the Gender Justice Advocacy Coalition, we have decided that in upholding our core values, we must publicly condemn this event,” the email read. “The threat that naturalizing these kinds of targeted hate speech within our mainstream political discourse, is devastating for communities who battle disenfranchisement and systemic, structural violence.”

The coalition explains demonstrators can participate in numerous ways, including “silently holding a sign, protesting outside, or attending the event to disrupt it.”

The Network of Enlightened Women chapter at Cornell is hosting tonight’s event at 5:00 PM. Coulter is expected to speak about a number of political issues, including the midterm elections, according to a source familiar with the event.

The email included a flyer titled “Bigots like Ann Coulter are not welcome at Cornell” which will be distributed on campus to recruit more protesters.

“The larger an oppositional turn-out is, the more likely we are to make an impact,” the email read. “By spreading the word within our organizations, we have a great opportunity to have a robust presence, and show that this campus has much more to offer than denigrating hate speech.”

A different flyer claims “Ann Coulter supports removing women’s right to vote. She’s speaking at Cornell today.” It then lists the location of the protest and encourages students to arrive at 4:30 PM. 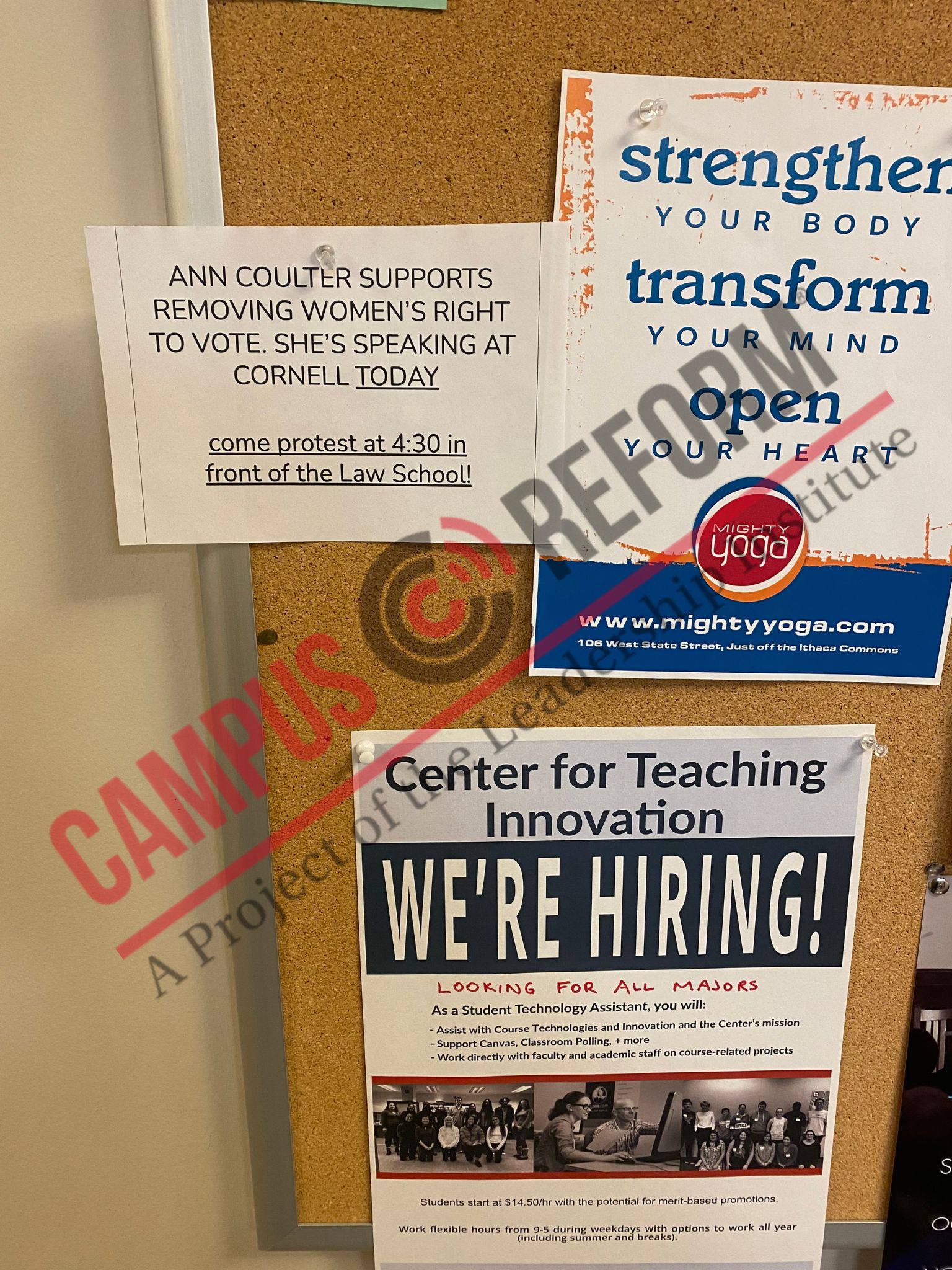 A third flyer obtained by Campus Reform alleges that “Coulter has a history of hateful views.” 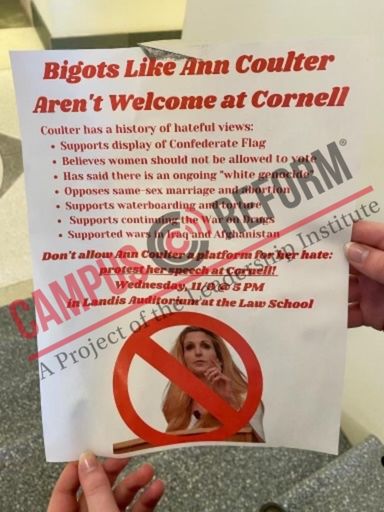 An op-ed in The Cornell Daily Sun on Monday also asserted “Ann Coulter is not welcome here.”

“Free speech assumes that there are no inequalities, which allows everyone to have an equal voice,” the authors wrote. “Therefore, Cornell University not preventing Ann Coulter from speaking on campus upholds the status quo whereby an oppressive class has the largest voice in an era where the Republican Party, despite being unpopular, can win the presidency through the biased Electoral College and win seats in the House with help by illicit gerrymandering.”

“By allowing a powerful right-wing pundit who revels in hate and controversy onto campus, Cornell turns a blind eye to extremism that may pose a threat to vulnerable students.”

The op-ed also targeted NeW for being “an organization of conservative women funded in part by the Koch family, a dynasty of billionaires that promotes extreme right-wing values.”

Campus Reform previously reported on a petition demanding the university cancel the event. Despite the effort, Rebecca Valli, Director of Media Relations at Cornell University, told Campus Reform the university “has stood for free and open inquiry and expression, and robust debate and a discussion of all views are hallmarks of the Cornell experience both in and out of the classroom.”

Campus Reform contacted every organization mentioned and will update accordingly.