A Yale University psychiatry professor tweeted that Adolf Hitler did more to retain his followers than President Donald Trump.

The professor deleted the tweet after receiving backlash from her followers and others.

Yale University psychiatry professor Bandy Lee tweeted that Trump has a “dangerous mental pathology.” She went on to say that Hitler had more competence than Trump.

Within hours, Lee deleted her tweet because she received backlash from many people.

She said she deleted the tweet because “upset so many people and was not provoking thought but the opposite.” 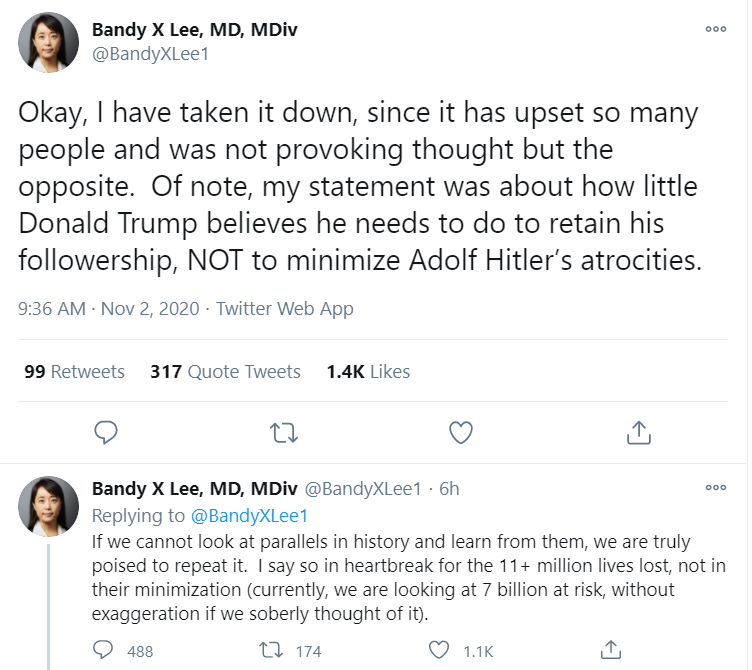 Lee told Campus Reform after the initial publication of this article that she removed the tweet, "because of the immediate distress."

But, she added, "drawing parallels and making comparisons is what I do as a scholar on violence.  I do it for the purpose of prevention, precisely because the atrocities have been terrible throughout history and can happen again.  If we examined closely, Hitler is neither unique nor the worst...Donald Trump is more dangerous precisely for the response to my tweet: people are outraged that I may have ‘praised’ Hitler but fail to see the parallels in Trump.”

Campus Reform previously covered Lee for several of her controversial statements, including saying “President Trump’s ‘mental impairment’ warrants an examination of his fitness for office.”