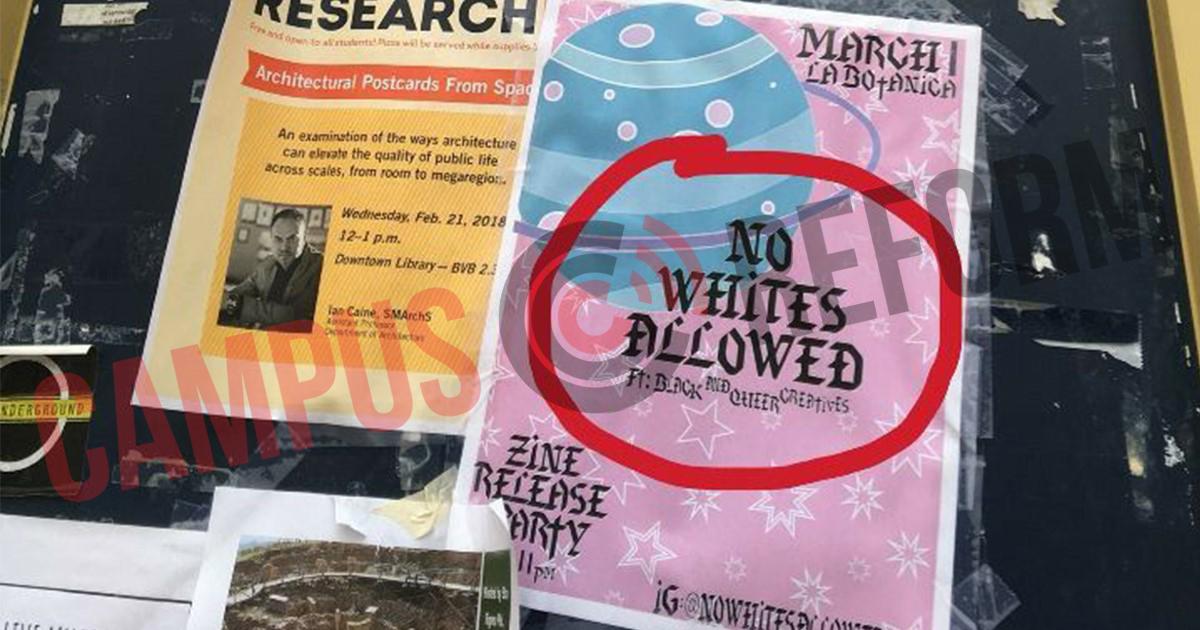 A group of students at the University of Texas, San Antonio plans to start publishing a “No Whites Allowed” (NWA) magazine.

According to a Facebook event titled “Zine Release,” the magazine will be revealed on March 1 at La Botanica, which describes itself as “Texas' first vegan restaurant with a full bar and performance and event venue.”

"So you're saying that because segregation happened, it's fine to be racist against Whites?"

“Thursday at La Botanica from 8-11pm there will be the NWA Zine release party! This zine specifically features and promotes black and brown lgbtqa creatives,” the description states. “We hope to showcase our talent and create an open space for our voices to be heard.”

Student Kayla Ramey further elaborated on the event’s purpose in a comment.

“I keep having to make this post but I'll try it one last time so everyone clearly understands. The name of the zine is No Whites Allowed. It's a zine for QPOC and by QPOC,” Ramey wrote, noting that while “white people are welcome to come to the event,” the “main goal is to celebrate and empower people that society routinely ignores and rejects.”

[RELATED: Prof claims ‘there is no such thing as black racism’]

An individual named Thor Menslage questioned whether the event would constitute “racism” by excluding “whites,” but he was rebuffed by defenders of the event who stated that “there have literally been whites-only establishments that were government sanctioned and approved.”

“So you're saying that because segregation happened, it's fine to be racist against Whites?” Menslage countered, to which another student, Katie Gee scoffed that “equality is just more cishet [cisgender heterosexual] white supremacist patriarchy trying to write the narrative.”

“We have a host of liberal organizations who regularly pass around anti-white propaganda,” one anonymous student told Campus Reform. “Our campus does nothing about this, doesn't label it hate speech, won't remove it, etc.”

UTSA Chief Communications Officer Joe Izbrand, however, told Campus Reform that the flyer had, in fact, been removed by university officials upon its discovery.

“This flyer showed up on Feb. 15,” he said. “It was not approved or authorized by the university and was not affiliated with any campus organization or event. It was immediately removed.”

Campus Reform also reached out to Ramey, but did not receive a response in time for publication.