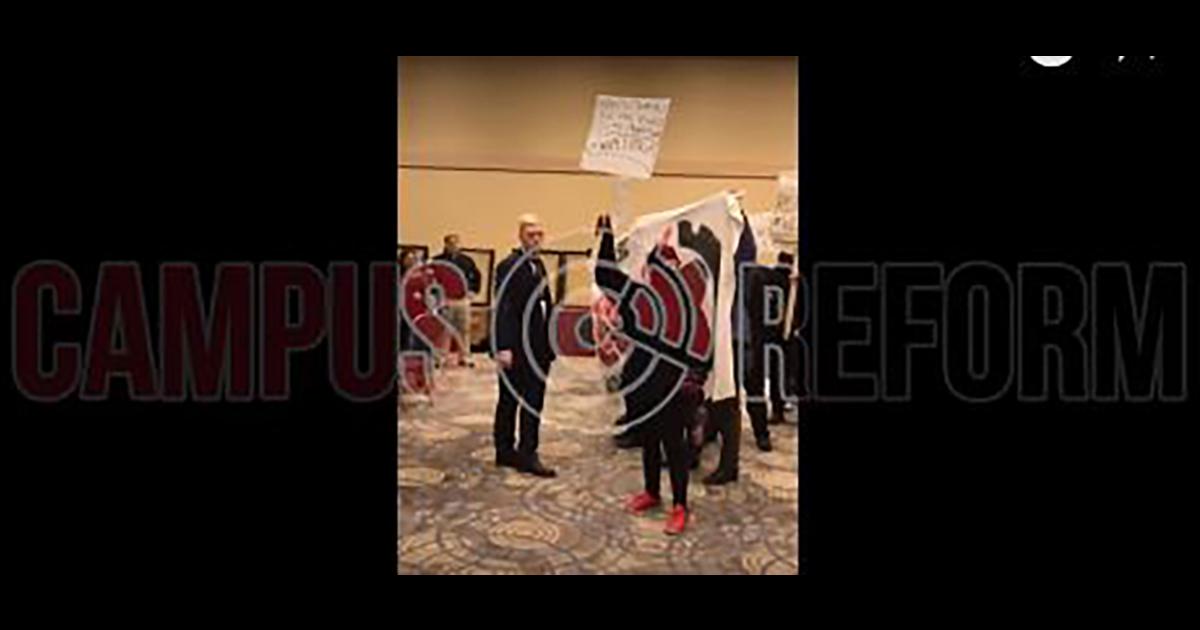 A mob of Antifa demonstrators crashed a Turning Point USA (TPUSA) Midwest Regional Conference on Saturday, attempting to ruin the event for more than 300 attendees.

According to It’s Going Down, a website for Antifa organizations, the radical activists attempted to disrupt the event twice, sending two groups of protesters with signs and banners to interfere with the conference, which took place over the weekend in Rosemont, Illinois.

"It's actually pathetic at this point. It polarizes the sides more, and nothing was accomplished with them showing up—nothing."

“This morning, comrades came in two waves,” an Antifa member wrote. “I was in the first and we had about 10 people total. Our group was between the ages of 23 and 70. We were a mix of Chicago GDC, DSA Libertarian Socialist Caucus, Milwaukee IWW, and antifascists.”

The protesters then went on to walk “through the elevated walkway with our picket signs, all anti-capitalist and anti-racist messages written on the back of outdated Toys for Tots posters stapled to recycled wood sticks.”

The second wave was much smaller, consisting only of about 5 people, the website explains. During both disruptions, security officers confronted protesters and promptly removed them from the conference facility.

Once the Antifa members were outside, several TPUSA members followed the demonstrators to counter-protest.

“It was basically to show them we're not backing down and we're not gonna let them ruin this conference,” one student attendee, Jake Lorenz, told Campus Reform.

Another attendee, who wished to be identified only as “Evan,” disclosed to Campus Reform that once outside, Antifa began to light different objects on fire using “lighters [and] aerosol spray,” including “toilet paper, signs, and plastic pieces.”

“It smelled awful, so we left,” Evan said.

According to Lorenz, the TPUSA attendees started to chant “USA! USA!” as police finally showed up and ushered the Antifa members away from the premises.

“They did not re-enter and could not be on the grounds,” Lorenz told Campus Reform.

The GDC touted the protest on its Facebook page, calling TPUSA a “far-right fascist group” that spreads ”misinformation and racist, xenophobic, and white supremacist messages.”

Antifa, a loose coalition of extreme-left groups whose members are known for concealing their faces and engaging in acts of violence against their political opponents, has been identified by the Department of Homeland Security as a domestic terrorist threat.

“It's actually pathetic at this point,” Lorenz said of Antifa’s attempts to shut down the event. “It polarizes the sides more, and nothing was accomplished with them showing up—nothing.”