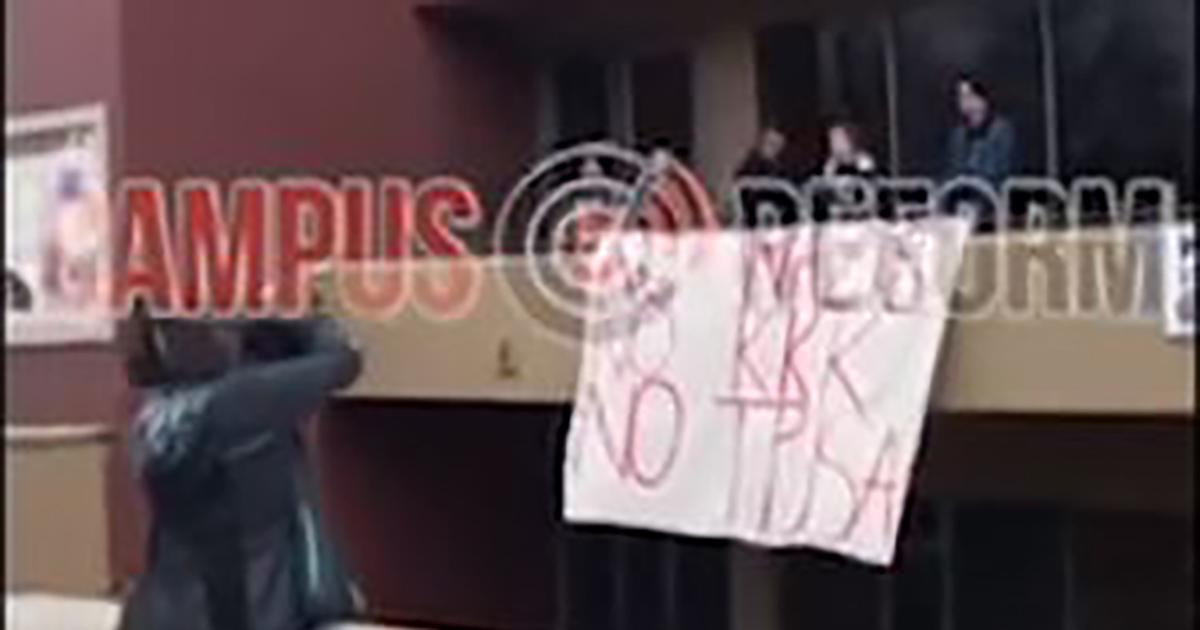 Students at Colorado State University (CSU) are calling for the removal of their Turning Point USA chapter, saying its actions “directly encourage White Supremacy on campus.”

The petition, created by Students Against White Supremacy (SAWS) at CSU, claims that [t]he actions and words of Turning Point USA directly encourage White Supremacy on campus,” and accuses the school of fostering “an unsafe space for marginalized students” by failing to take action against the conservative group.

"The political climate on our campus used to be much more accepting of viewpoint diversity, but this semester it has become increasingly hostile towards conservative viewpoints."

As of press time, 145 people had signed the petition, which concludes by demanding that TPUSA “be dismantled or removed from campus.”

According to The Rocky Mountain Collegian, SAWS was created in response to white supremacist posters being found around campus over the past year, and has been especially active since February, when a group of white supremacists started a scuffle outside the venue where TPUSA founder Charlie Kirk was delivering a speech.

The petition, however, makes no allusion to the violent altercation, instead making generalized accusations that TPUSA is a white supremacist group.

“Bias-related incidents are acts of White Supremacy. The University has made the choice to do nothing, despite its power to make real change,” the petition declares. “As a result of this contradiction, White Supremacy has been allowed to thrive at CSU. This creates an unsafe space for marginalized students on campus and also puts the burden of healing from trauma onto those students.”

The Collegian notes that SAWS previously disrupted a March 29 event intended to give students and administrators the opportunity to discuss the rise in hate and bias incidents, storming the stage to denounce TPUSA and complain that CSU does not equate “bias-motivated incidents” to white supremacy.

“Bias-related incidents are acts of white supremacy and they need to be labeled as so,” insisted SAWS member Erica LeFehr, who later added that “there will be no false flags of unity with students who perpetuate white supremacy and we demand for the removal of the Turning Point USA chapter from CSU’s campus if the administration is truly committed to an inclusive and safe environment from all students.”

Additionally, the protesters held a sign which reads “No Nazis, No KKK, No TPUSA,” as seen in video footage provided to Campus Reform.

SAWS member Alex Scott told the Collegian that the group isn’t targeting conservatives in general, but rather is focusing specifically on TPUSA out of concern that the group will use members who also serve on student government to reduce funding for liberal student groups.

“We aren’t targeting the College Republicans, we aren’t targeting Young Americans for Liberty, and that’s for a very specific reason,” Scott said. “They don’t have a track record of recordings of their leaders saying that ‘the reason we exist is to target campus elections.’”

in an “automated response” to a media inquiry from Campus Reform, however, SAWS asserted that it could not respond because its “crack team of paid protesters are too busy dressing provocatively as a means of luring campus conservatives onto a stylistically painted 'x' and dropping anvils on their heads.”

Chris Mann, a member of TPUSA at CSU, told Campus Reform that the effort to shut down TPUSA is representative of a deteriorating political climate at CSU.

“The political climate on our campus used to be much more accepting of viewpoint diversity, but this semester it has become increasingly hostile towards conservative viewpoints,” said Mann. “We are sad that the dialogue on campus has reached the point where principles such as less government and free markets are labeled as perpetuating the repulsive and abhorrent agenda of those who believe they are better than other people based upon the color of their skin.”

Mike Hooker, the director of public affairs at CSU, told the Collegian that the university cannot unilaterally remove TPUSA from campus, but did indicate that the school would be able to pursue disciplinary action if the group were to violate any university policies.

“CSU has an established process for recognizing student organizations, part of a system of student governance that has been developed through generations of students steadfastly fighting for the right to organize without undue influence from the administration or outside organizations,” Hooker explained. “All student clubs and organizations enjoy rights and privileges associated with official recognition by the University.”

"Turning Point USA at CSU has issued dozens of statements denouncing hateful and white supremacist groups on our campus and in the community," said chapter President Isabel Brown. "We’ve made it abundantly clear that our organization stands for three things—free markets, limited government, and fiscal responsibility—no more, no less. Despite the false accusations issued against our chapter, we are all excited about continuing to fight for conservative students to have a home at our University."

Campus Reform reached out to CSU, but has not received a response.