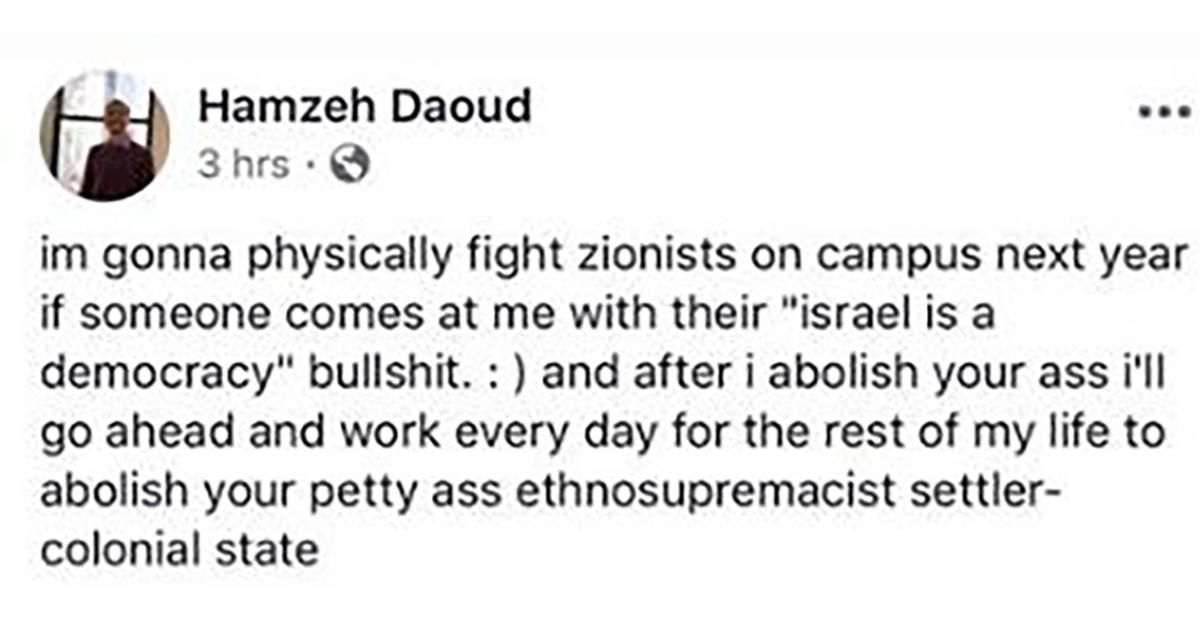 The Stanford University student who threatened to “physically fight” Zionist classmates is slated to serve as a Residential Assistant in an on-campus dormitory during the coming school year.

“I’m gonna physically fight Zionists on campus next year if someone comes at me with their ‘Israel is a democracy’ bulls**t,” student Hamzeh Daoud wrote in a now-deleted Facebook post, as reported by The Stanford Daily. “And after I abolish your ass I’ll go ahead and work every day for the rest of my life to abolish your petty ass ethno-supremacist, settler-colonial state.”

"Stanford should take disciplinary action against Mr. Daoud and SCR demands that Stanford terminate Daoud's position as a Residential Assistant in the Norcliffe dormitory immediately."

[RELATED: SJP warns Tulane not to collaborate with Israeli universities]

In the same post, Daoud reportedly attached a link to an article titled “Jewish Nation-state Law Makes Discrimination in Israel Constitutional,” which was written in response to the new Basic Law passed by the Israeli government declaring Israel to be the nation-state of the Jewish people.

Hours after publishing the remark, Daoud, who is a member of Stanford’s Students for Justice in Palestine (SJP) chapter, edited the post and changed the word “physically” to “intellectually,” the publication reported.

“I edited this post because I realize intellectually beating zionists is the only way to go,” he wrote. “Physical fighting is never an answer to when trying to prove people wrong.”

In light of the Daoud’s role as a Resident Advisor (RA) responsible for the wellbeing of residents living in the Norcliffe dorm, some students have voiced concerns about his views expressed on social media.

In a Facebook post, the Stanford College Republicans wrote that “threatening to assault other students who hold a different point of view is anathema to a free society and any kind of education, let alone the operation of the premier research university in the world.”

"Stanford should take disciplinary action against Mr. Daoud and SCR demands that Stanford terminate Daoud's position as a Residential Assistant in the Norcliffe dormitory immediately," the statement continues. "Mr. Daoud's statements reveal him to be a danger to the safety of students on Stanford's campus, and such an individual should never be put in any position of authority over other students, particularly in a dormitory that includes freshmen."

The Stanford College Republicans aren’t the only ones arguing that Daoud should lose his position as an RA. Adam Rubenstein of The Weekly Standard reported last week that one student said Daoud “has been one of the most aggressive and prolific anti-Israel figures at Stanford.”

“Now, he’s calling for violence against pro-Israel students,” the student continued. “He will be an RA in a dormitory next year, and this is unacceptable, as he could quite literally threaten the safety of the students in the dormitory.”

In a statement to Campus Reform, a university representative stressed that “threats of physical violence have absolutely no place in the Stanford community,” adding that “the mission of a university depends on the open exchange of ideas and the sharing of divergent viewpoints, including on controversial issues.”

While the school noted that Daoud amended the post “to make clear that he does not support physical violence” and “apologized in a personal letter to members of the Jewish community at Stanford,” the university insisted that it has “an obligation to address the original communication and its effects.”

The school could not say what sort of disciplinary sanctions Daoud might face, however, including whether he will be removed from his position as RA.

“We are addressing these issues now,” the official explained. “The author of the post will receive fair and thoughtful consideration, as our work with students demands. In matters involving individual students, privacy laws limit what the university can disclose publicly, and we understand that this may be unsatisfactory to some.”

Stanford’s SJP, an organization whose national arm is often accused of anti-Semitism, declined to comment.

Bradley Devlin is a California Campus Correspondent, and reports liberal bias and abuse on campus for Campus Reform. He studies Political Economy at the University of California, Berkeley, where he serves as the External Vice President of Berkeley College Republicans.