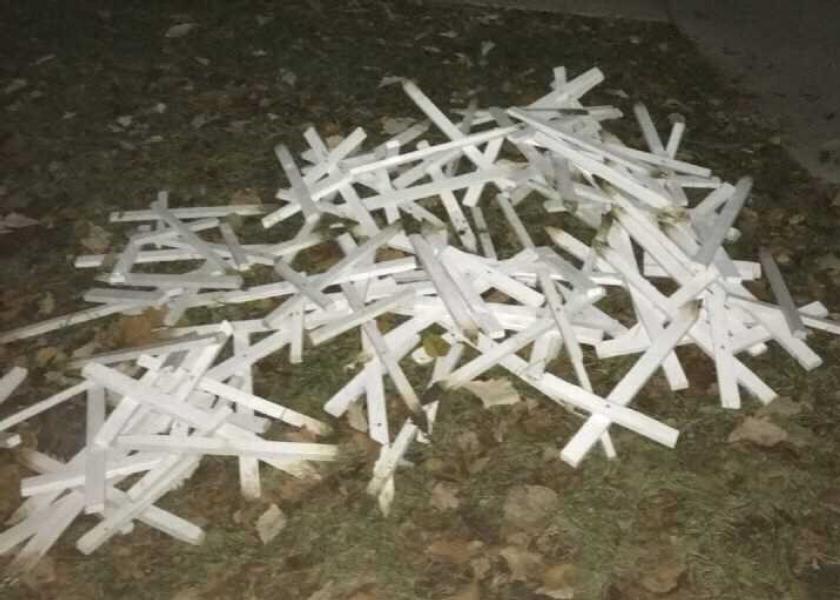 A pro-life display on an Ohio college campus was vandalized as many as four times over a five-day time.

The Students for Life chapter at Miami University installed a “cemetery of innocents” display on campus on Nov. 12. Each of the crosses displayed represented 10 babies killed each day by abortion, according to the group's Facebook page.

"This display has been vandalized every single year that I have been at Miami, and it is [a] direct attack on our First Amendment rights by our fellow students"

Miami University SFL President Ellie Wittman told Campus Reform that the vandalism included the knocking over of the post reading "Each cross represents 10 babies that die by abortion each day,” as well as the digging up and/or recycling of all of the crosses in the display.

Wittman said that Students for Life reported the three vandalism incidents to the university police.

The organization set up the display again, only for it to be taken down again on Nov. 15. Wittman told Campus Reform that “it looked like someone had walked right through it, kicking a couple dozen crosses over.”

The Students for Life president also cited the theft of a sign displaying information for a pro-life helpline, as well as a website for “post-abortive women.”

Wittman told Campus Reform that the Students for Life chapter met with Miami University of Ohio Dean of Students Kimberly Moore who offered to provide resources to the group to cover the stolen sign.

The SFL president said that she has never seen intolerance toward pro-life views reach this point at Miami University.

“This display has been vandalized every single year that I have been at Miami, and it is [a] direct attack on our First Amendment rights by our fellow students. Free speech, especially on a college campus, is a no-brainer and all students, regardless of viewpoint, should respect that,” she told Campus Reform. “I believe this incident demonstrates a lack of civil discourse on college campuses, and it is a direct result of a lack of respect for the Constitution, and particularly, the First Amendment.”

“Unfortunately, the whole club expected the vandalism. It is vandalized every year and we didn’t expect this one to be any different,” Wilhelm told Campus Reform. “Of course, we are always hopeful that college students will respond more peacefully and have a constructive dialogue with us.”

The school’s dean of students, Kimberly Moore, sent a statement to the campus community following the vandalism.

“Last night, the Students for Life display of crosses on the Hub was vandalized,” the dean said. “Such destructive behavior is not acceptable in our community and we must all join together to condemn it in the strongest possible terms.”

The dean went on to say that every student organization has the right to free speech and encouraged students to engage ideas with which they disagree.

“Our values call us to protect the rights of our students and student organizations,” Moore said in her email. “They insist we hold and express disparate beliefs and encourage the discussion and learning that comes from sharing our differences of experience, opinion, or viewpoint.”

The Miami University Police Department is investigating the acts of vandalism, according to WXIX-TV.